Venice at the edges

Venice in late September: a good time to be here again. The figs and peaches are at their best, the light is clear as ever and there are fewer people around now the high summer has passed and the frenzy of the Film Festival has died down.

What we enjoy best is revisiting the quiet places. Yesterday we retraced a route we first took by night five years ago when we were met at the lone tree in the corner of Piazzale Roma and escorted to the apartment we were renting in the Corte Mazor. We followed the Fondamenta Burchielle, and crossed the Rio Terra dei Pensieri. This is very definitely not tourist Venice: the city’s main prison is here and the cell blocks with their upwardly louvred windows look intimidating. But I once saw and heard a remarkable scene here early one morning: a woman standing under the prison wall singing loudly and gazing up at one of the windows where a broom head, poking out between the louvres, was being waved up and down in time to her singing. The more it waved, the louder she sang. Her face streamed with tears, but she was smiling.

When we reached the little square where our apartment had been, we had a spritz at Cambusan, a café entirely patronised by locals, and then made our way round the corner to the westernmost church of Dorsoduro, San Nicolò dei Mendicoli. It is dark inside – there are very few windows – but the decoration of its Byzantine columns is picked out in gold, as are the giant wooden brackets supporting the organ loft at the back of the church. Just inside the door is a plaque announcing in Italian and English that this church was rescued from the floods and restored with the help of the Venice in Peril fund between 1972 and 1977. Indeed it was, and while in restauro San Nicolò was used as the location for one of the most frightening scenes in the film Don’t Look Now (1973). Donald Sutherland plays an architectural historian in charge of the restoration of the church, who is almost killed when the high scaffolding on which he is standing collapses and he only saves himself by clutching at a swinging rope as he falls.

Less than five minutes away we come to the church of Angelo Raffaele, a complete contrast: much bigger, much lighter and all baroque. The organ is playing, and this lures us in. I first visited the church after reading Salley Vickers’ novel, Miss Garnet’s Angel. In the story, Miss Garnet’s little apartment is located in the square beyond the church. The church itself, and the story of the angel Raphael and Tobias, the young boy with the fish, play a large part in the novel. There is hardly anyone around, even though we are only a couple of hundred yards from Zattere, the popular promenade which runs along the Giudecca Canal up to the Punto delle Dogana, at the entrance to the Grand Canal. We don’t walk that far, turning left instead towards San Trovaso. We pass the gondola repair yard and walk under the windows of the little apartment Ezra Pound rented when he first came to Venice. Before we leave Venice we shall go, as we always do, to pay our respects to Pound and Olga Rudge in the little protestant cemetery at the far end of San Michele, the cemetery island. Nearly always, we have the place to ourselves.

And today, getting as far away from the centre of Venice as it is possible to get and still stay within the confines of the city, we have been to Pellestrina, in the remote south west corner of the lagoon. It takes some getting to: first, we have to cross to the Lido, which is easy enough, and the new landing stage at Santa Maria Elisabetta is the smartest in all Venice. Then we catch a Number 11 bus, which sets off down the Gran Viale, the main street of the Lido, and turns west along the Lungomare Marconi. Now the Adriatic is sparkling on our left beyond the beach huts that used to belong to the Hotel des Bains, where Thomas Mann set Death in Venice and where the 1971 Visconti film starring Dirk Bogarde  was shot. The Hotel itself, a monster of a place, closed some years ago and its conversion into luxury flats seems to have ground to a halt. The bus carries on to the further point of the Lido, Alberoni, and then travels by ferry to the next island, which is really no more than a long sandbank with a defensive sea wall, and this is Pellestrina. Even so, the bus has to drive to the furthest end to reach the village itself, and by then we are much closer to the city of Chioggia, across the last stretch of the lagoon, than we are to Venice.

Pellestrina is all about boats and fishing. There are boat builders on the island (many of Venice’s vaporetti come from the Pellestrina boatyards) but most of the vessels one sees are snub-nosed fishing boats that dredge the sea bed for clams. Like most non-Venetians my introduction to the place was Donna Leon’s excellent Inspector Brunetti novel, A Sea of Troubles, in which the elusive Signora Elettra falls in love with a fisherman and Brunetti’s faithful boatman, Bonsuan, is himself murdered.  She made it sound a fearsome place. 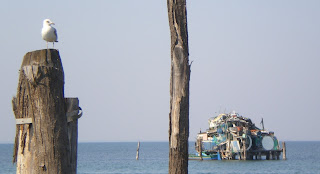 Today, though, there is something wonderfully quiet about Pellestrina. The houses are small cottages, not imposing in any way, their shutters closed against the sun; there seem to be more seagulls and pigeons than people. Occasionally a boat sets off or returns, but the sea is otherwise absolutely calm.

A little way out from the shore there are a few strange random huts on stilts, fishermen’s stores presumably, but looking like odd surviving structures from an ancient lake village or a Borneo kampong. It’s hard to imagine anything or anywhere looking less Venetian than these silent shanties.

When Donna Leon came to Cambridge a few years back and signed copies of her book in Heffers, she wrote in ours, ‘Do not eat the clams’.  She warned us the lagoon was so polluted that the clams were by now almost certainly radioactive. I’m glad to say we ignored her advice today. At the Ristorante ai Pescatori, the tables of which were simply set out in the gap between two cottages, we had probably the best spaghetti alla vongole we have ever eaten.