Reading Stained Glass (ii): Wittersham in the Isle of Oxney 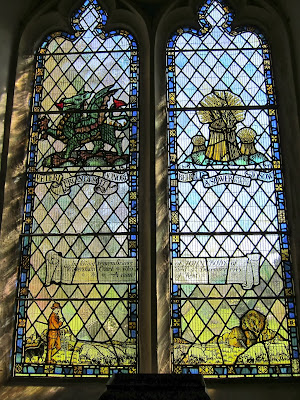 In Reading Stained Glass (i): Rouen, earlier this year, I discussed a small medallion from a huge early 13th century window in Rouen Cathedral. This intensely coloured medallion, depicting Christ washing his disciples’ feet before the Last Supper, was so high up it was difficult to see with the naked eye. By contrast, I want to write now about a 20th century eye-level window in a remote village church in Kent, which appears to have barely any religious connotation,  and mainly consists of palely coloured glass so clear that the churchyard trees outside almost become part of the picture.

This window, in Wittersham Church in the Isle of Oxney, is a memorial to John Body. It’s a simple two-light window, each light full of small lozenge-shaped pieces of plain hand-blown glass. Most of these quarries (to give them their technical name – which comes from the French carré: square) are clear, though some are tinted very pale blue, lemon, pink or green. Each light is also surrounded by a border made up of three elements: a narrow outer ribbon of clear glass and a central ribbon of vivid, varied blues, interspersed irregularly with small patterned gold squares or oblongs. These sometimes intrude into the narrow inner band of clear glass, though never into the outer. Every one is different, and all are painted black on gold with a cheerful naivety.

In the bottom right-hand corner of the window, the border frames a curious little figure: a cowled monk,

no more than a couple of inches high, and easily overlooked. But he has an important job to do. The monk is the emblem of the Whitefriars Studios, home of the illustrious stained glass firm of James Powell and Sons, and the initials either side of the monk, J H, indicate that this window was the work of James Humphries Hogan, Chief Designer of the company before and after the Second World War. Beneath the monk, the date 1947 indicates when the window was made and installed.  Hogan died the following year, so this was one of his very last windows.

All these bits of information help us the better to understand the window; for with windows, as with books, reading means looking, contextualizing, reflecting and then looking again, this time seeing the window in a clearer light. However, there is much more of this window to take in. First the dominant images: in the left-hand light a green dragon stands on a clump of grass with, beneath it, a Latin motto enscrolled thus: VETERI FRONDESCIT HONORE. Then in the right-hand light, three wheatsheaves, emblems of harvest, and beneath them a biblical text BEHOLD A SOWER WENT FORTH TO SOW. This is almost too long to fit across the glass, so the words ‘went forth’ are reduced to half-size lettering. Odd, don’t you think, to have a text about sowing seed accompanying an image of already harvested corn? Presumably the idea is to suggest that, in the context of this window at least, the seed fell upon fertile ground.

Beneath the two main images in the Wittersham window, running across the two lights and ignoring the stone mullion that separates them, is a dedication. The lettering is an excellent example of mid-20th century calligraphy: it’s beautifully clear but just a little self-conscious with its interlinking loops and a hint of the formal script of an earlier age. It is the exact opposite of the Gothic script that was the lettering of choice for Victorian stained glass inscriptions. The inscription reads: 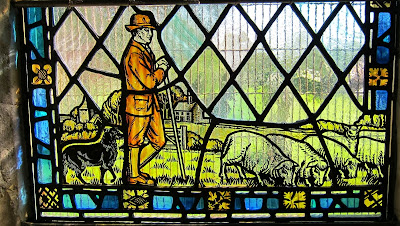 This gives little away, though the picture at the bottom of the window offers a clue: it shows a gentleman farmer in a Norfolk jacket leaning on a stick with his faithful sheep dog beside him: it’s after the war; the world is at peace again, so his flock may safely graze against a bucolic background of meadow, spinney, church, farmhouse and newly thatched haystacks – the ladder still propped against one of them. ‘All is safely gathered in’, in fact. The whole image, running across both lights of the window, suggests a man at peace with the world in a world at peace: he has lived, after all, just long enough to see the end of the Second World War.  It’s a picture of what Candida Lycett Green in The Oldie – my current magazine of choice – calls ‘unwrecked England’.

There is another important clue, however. The Latin motto belongs (as does the emblematic dragon) to the Royal East Kent Regiment, ‘the Buffs’. It means that the regiment ‘flourishes’ (frondescit) with ancient honour’ – though some translators render it thus: ‘Its ancient honour is evergreen’. A quick internet search will tell you that Lt. Colonel John Body was a career soldier whose regiment was The Buffs and who commanded the first British troops to enter Baghdad in 1917. He was awarded the DSO and Bar and many other decorations, which, sic transit Gloria mundi, ended up on e-Bay. Astonishingly – to me at least – after the war he became Master of the Tigris Vale Foxhounds in Mesopotamia. Eventually he retired from the Army, came back home to Kent, happily exchanging the Garden of Eden – Milton speaks in Paradise Lost of  ‘Tigris at the foot of Paradise’ – for the Garden of England. There he was a Justice of the Peace and Deputy Lord Lieutenant of the County.  He lived quietly at Wittersham Court, respected by all as a countryman passionate about preserving the countryside.

Such a man was John Body, and I like to think that it’s as he would have wished, that none of his wartime or civic distinctions should appear on the inscription on his memorial window.  So what might look at first like a rather bland example of mid-20th century glass offers on closer reading a subtle and moving example of post-war English stained glass  by a designer, James Hogan, who deserves to be better remembered: an understated celebration both of an immemorial England that has just survived five years of war, and of a Man of Kent, soldier (the dragon) and farmer (the wheatsheaves) – literally then,  ‘ A Body of England’s, breathing English air’.

[illustrations: the John Body memorial window, in the church of St John the Baptist, Wittersham. I am grateful to my friend Peter Hart for supplying the photograph for this window, which I have yet to see for myself.

I have written about this part of the Kent-Sussex border once before:
World and time: what I did on my holidays
Posted by Adrian Barlow at 07:17