Solomon Eagle: re-reading Defoe in the time of Coronavirus 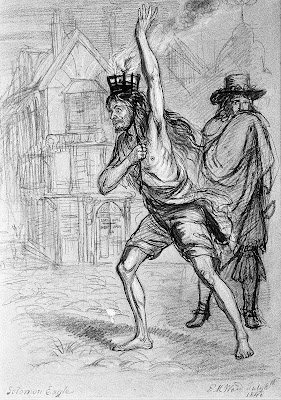 In which I resolve to spend this period of enforced isolation writing letters by hand, re-reading Defoe’s Journal of the Plague Year and re-starting my blog.

You’d think that self-isolation and social distancing offer plenty of opportunities for reading and writing. And so, of course, they do. I have made a list of the friends and others to whom I owe long-overdue letters, and have even made a start at writing them, by hand and using a fountain pen. The last study day I conducted before such events were proscribed was on Seamus Heaney; my audience of students (people, like me, at risk from Covid-19 by virtue of our age) especially enjoyed his poem The Conway Stewart with its loving description of the ‘Three gold bands in the clip-on screw-top’ and the ‘spatulate, thin / Pump-action lever’ in the pen’s ‘mottled barrel’. The poem recalls how Heaney’s parents bought him a fountain pen to take to boarding school, the pen with which he would write his first letter home –

my longhand
‘Dear’
To them, next day.

No poet I have ever come across has written more movingly about the life of a bewildered child at boarding school.

I have made a list of the books I want to read or reread, starting with Daniel Defoe’s Journal of the Plague Year (1722). It isn’t a journal at all: he himself was only six when the Great Plague devastated the population of London:

(as I learned in my first term at my own boarding school). Defoe’s first-person narrator claims to have reconstructed his ‘journal’ from notes he made at the time in his ‘memorandums’, together with extracts from oral accounts, public documents, official records and other sources, but really it is as much a work of fiction – an event ‘witnessed’ by a man who never existed – as Peter Ackroyd’s 1985 novel of the Plague and its aftermath, Hawksmoor. Still, Defoe’s account resonates strongly: it is all about self-isolating, social distancing – people walking down the centre of the Whitechapel Road to avoid getting too close to those standing on the pavements – and the difficulties of shopping:

People used all possible precaution. When any one bought a joint of meat in the market they would not take it off the butcher’s hand, but took it off the hooks themselves. On the other hand, the butcher would not touch the money, but have it put into a pot full of vinegar, which he kept for that purpose. The buyer carried always small money to make up any odd sum, that they might take no change. (p.88)

The strange ways in which Londoners started to behave during the Plague, and Defoe’s comments about them: the book is worth reading for these alone. The Guardian Review used to run a quirky weekly column, Ten of the Best….’ and Solomon Eagle topped the list of ‘Ten of the Best Religious Zealots in Literature’, even though he gets only a glancing mention by Defoe:

I suppose the world has heard of the famous Solomon Eagle, an enthusiast. He, though not affected at all but in his head, went about denouncing of judgement upon the city in a frightful manner, sometimes quite naked, and with a pan of burning charcoal on his head. What he said, or pretended, indeed I could not learn. (p.116) 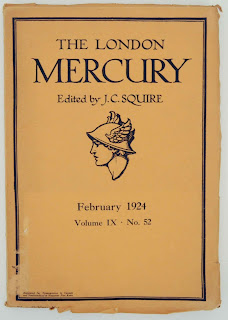 By one of those odd coincidences that gladden the heart, I discovered on the very day I read about him in Defoe, that ‘Solomon Eagle’ was the pen name adopted by the poet and literary editor JC Squire, when he was book reviewer for The New Statesman before and during the First World War. In his heyday, Squire was possibly the most influential bookman in London: among his greatest claims to fame, he founded and edited the new London Mercury from 1919 to 1934. Although he fell spectacularly out of favour with writers such as TS Eliot and Virginia Woolf, and out of fashion altogether by the 1940s, he was a formidable, fascinating figure who is today all but forgotten. So it’s good to report that the writer John Smart, a specialist on London literary life (his biography of John Hayward is a key work on the subject) is completing a biography of Squire. A reassessment of this contradictory and complicated man is certainly overdue.

What I most want to do during these weeks of enforced inactivity is not only to read more and to write more letters, however. I want to return to writing this blog, which I began in August 2011 and which stuttered to a halt after 113 posts in 2018. The stutter developed not because I had grown tired of blogging, but because I was focusing more and more on writing about stained glass; eventually the effort of researching and completing two books* on that subject absorbed all my energy. After the second one was published early last year, I tried a few times to start again but struggled to produce even a stutter. Meanwhile, writing and speaking about stained glass have continued to take up much of my time.

Now, though, seems the moment to try again, always remembering Beaumarchais’ admonition: ‘La difficulté de réussir ne fait qu’ajouter à la nécessité d’entreprendre’  (The difficulty of succeeding only adds to the necessity of undertaking). As before, I shall aim to range across books, writers and readers, with occasional digressions onto people and places, even stained glass perhaps. Already I think I know one book I shall be writing about soon: Francesca Wade’s Square Haunting, just published and very well reviewed. I have only started to read it; but I’ve also skimmed through the bibliography at the back. To my astonishment, Imagism and After: a Study of the Poetry of Richard Aldington, is listed there – my MA thesis, deposited in Durham University Library in 1975 where, I had always assumed, it had lain unread and gathering dust ever since. Evidently not, but you’ll have to wait until I have read and written about this book centred on Mecklenburgh Square, on the edge of Bloomsbury, to learn why not.

Illustrations:
(i) 'Solomon Eagle’ drawing by EM Ward (1848); Wellcome Institute, reproduced under Creative Commons licence.
(ii) The London Mercury: cover. This journal was cherished as much for the quality of its typography and illustrations as for its content.
Posted by Adrian Barlow at 07:15