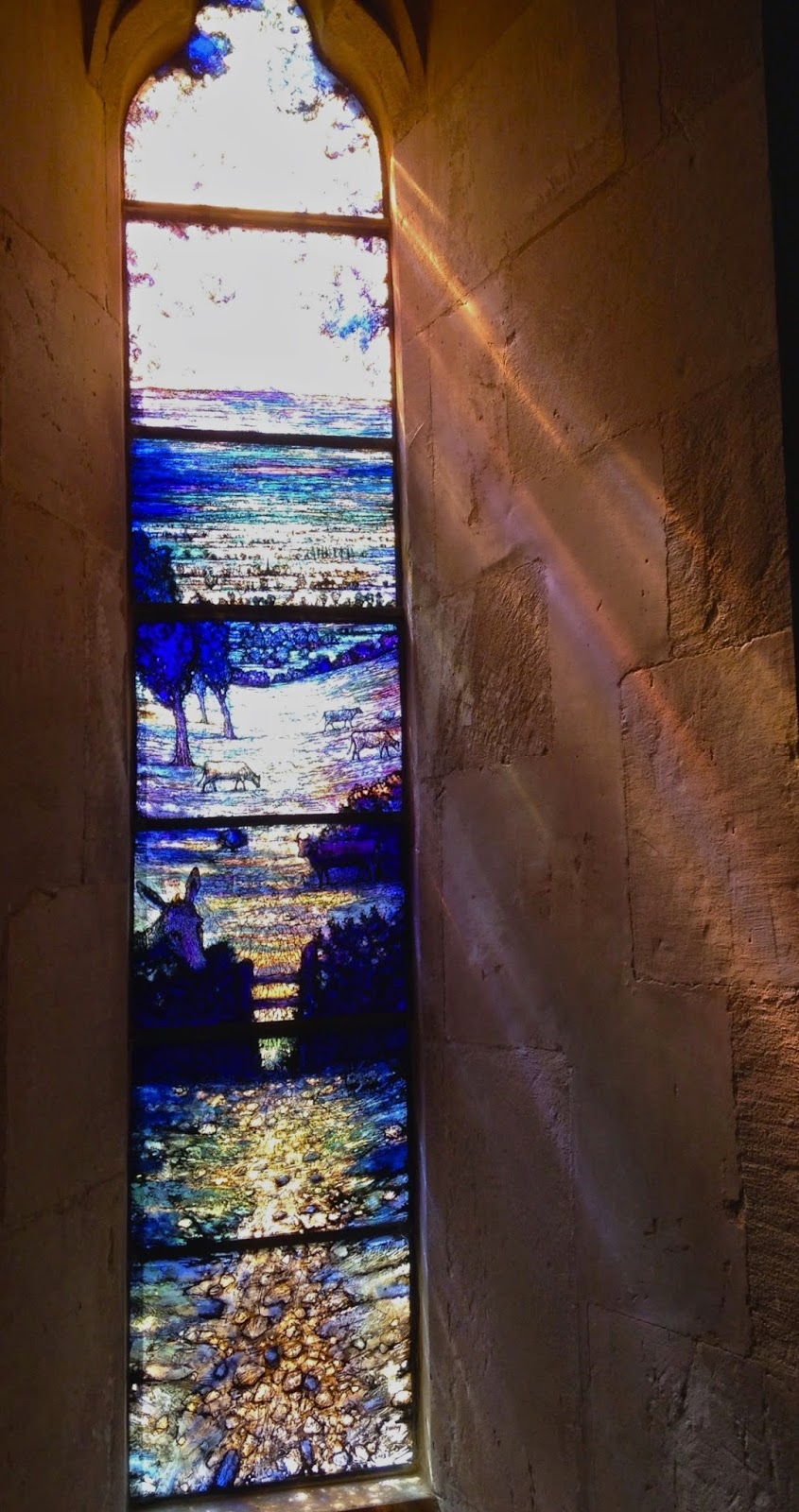 Some day, I trust, God’s purpose of Pain for me
Shall be complete,
And then—to enter in the House of Joy . . . .
Prepare, my feet.

This eight-line poem is called ‘Song and Pain’. Ivor Gurney wrote it sometime during the battle of the Somme. He records that he wrote it at Crucifix Corner. He had been involved in the early fighting, and his mood had swung between extremes:

But, in the name of the Pleiades what has a neurasthenic musician to do with all this? ….
O cuss it all though. I am glad to have been through it all, and will keenly enjoy telling others about it after.
And O the Somme – the valley of the Somme round Amiens! A delight of rolling country, of a lovely river, and trees, trees, trees ….
(Letter to Marion Scott, 5th July 1916)

He always counted himself a musician first, though poetry became more and more important to him when army life made composition difficult. He composed only four songs while in France and Flanders, carrying some muddy sheets of manuscript paper in his pocket, just in case. But once he’d been gassed and sent back to Blighty, in 1917, he began composing again. In ‘Upstairs Piano’ he vents his frustration:

O dull confounded Thing,
You will not sing
Though I distress your keys
With thumps ….

He blames himself for having allowed his musical gifts to lapse. It must break the hearts of ‘Chopin or dear Mozart’, he thinks, to hear him ruin their music: his ‘wandering fingers know / Not surely where to go’:

And yet, and yet, men pale
(Late under Passchendaele
Or some such blot on earth)
Feel once again the birth
Of joy in them, and know
That Beauty’s not a show
Of lovely things long past.

This idea of joy rediscovered – not just remembered – offers a commentary on ‘Song and Pain’. Despite the de profundis repetition of ‘Out of my sorrow’, distress has prompted something creative —‘these songs’. The next line, ‘Though somewhat of the making’s eager pain’, is characteristic Gurney. That flat, but not in the least flat-footed, ‘somewhat’ is a good example of the poet’s powerful reticence. (Cf. the ending of his poem ‘To His Love’: ‘that red wet / Thing I must somehow forget.’) The possessive gerund ‘making’s’ echoes the old Scots name for a poet, ‘Makar’: it’s a reminder that poems, like all art, call for effort in their construction, but that there’s something more than pleasure – Gurney calls it joy - to be found in this effort: hence the almost oxymoronic ‘eager pain’ (‘eager’ here double-edged, as in ‘keen’).

Nevertheless, the closing word of the first stanza suggests that even so small an element of joy must be paid for some time. ‘Borrow’ here tolls as well as rhymes with ‘sorrow … sorrow’, and so the stanza ends with a hint of something deeper than resignation. One thinks of Job: ‘Man is born unto trouble, as the sparks fly upward’.

The correspondence between the Old Testament Book of Job and this poem is not one I’ve discovered for myself. I found it in the artist’s notes accompanying another Gurney-inspired window by Tom Denny, about whose new Gloucester Cathedral memorial to Ivor Gurney I wrote recently. This one is in St. Paul’s Church, Shurdington, a village outside Cheltenham. It depicts a view looking down across the Vale of Gloucester towards the distant Malvern Hills. The link that Tom Denny has seen here between poet and prophet is not just allusive, it is specific:  ‘Behold, happy is the man whom God correcteth,’ says Job, ‘…  for thou shalt be in league with the stones of the field: and the beasts of the field shall be at peace with thee.’ The patience of Job, and his confidence that God is working his purpose out, are implicit both in this 2013 Gurney window (where the stones and the beasts of the field duly appear) and in the opening of Gurney’s second stanza:

Some day, I trust, God’s purpose of Pain for me
Shall be complete …

Gurney’s confidence, too, (‘I trust’) is enough to banish the sorrow of the previous stanza, and there’s a note of stuttering anticipation (‘And then—’) in what follows. The ‘House of Joy’ perhaps echoes the ‘house of the Lord’ from Ps. 23, the one psalm all First World War soldiers knew by heart: ‘Yea, though I walk through the valley of the shadow of death ….’ Perhaps, too, it recovers a childhood memory of the story ‘The Prince of the Nine Sorrows’ in Laurence Housman’s  book, The House of Joy (1895). But the poet this second stanza surely evokes is George Herbert.

I wish I could say with certainty that Gurney read and enjoyed Herbert’s poetry. Herbert, too, had a gift for finding solace at the end of poems full of dismay: ‘Sorrow was all my soul’ he says in ‘Affliction (i). It’s Herbert’s poem ‘Love (iii)’ I’d like to think Gurney had in mind when saying he longed ‘to enter in’ the House of Joy. This is not just a finicky phrase meeting Gurney’s need for an extra syllable to complete the iambic line. Mightn’t it be an echo of Herbert’s ‘my first entrance in’?

Love bade me welcome; yet my soul drew back,
Guilty of dust and sin.
But quick-eyed Love, observing me grow slack
From my first entrance in,
Drew nearer to me ….

And doesn’t ‘Prepare, my feet’ echo Herbert’s instructions to self in ‘Easter’: ‘Rise, heart’ and ‘Awake, my lute’? Both these poems had by 1911 already been set to music by Gurney’s friend, Ralph Vaughan Williams, for his Five Mystical Songs.  I can’t believe Gurney didn’t know them. I can’t believe, anyway, that Ivor Gurney didn’t love George Herbert’s poetry. I think ‘Song and Pain’ proves it.

Short Measures is a very occasional series in which I discuss a short poem (no more than 12 lines). For copyright reasons, it’s unlikely I can discuss poems published during the twentieth century. Here are my previous posts in this series: