Thus Thomas Hardy recalling ‘Friends Beyond’, but he was by no means the first. The 16th century Scots poet William Dunbar, in his ‘Lament for the Makaris’, lists the famous poets of the past whom Death has claimed:

He has done petously devour
The noble Chaucer, of makaris flour   [makaris: poets
The Monk of Bury, and Gower, all three -
Timor Mortis conturbat me.

There are few more poignant passages in Shakespeare’s History plays than the roll call of the dead on both sides after the Battle of Agincourt:

Charles Delabreth, High Constable of France,
Jacques of Chatillon, Admiral of France,
The Master of the cross-bows, Lord Rambures,
Great Master of France, the brave Sir Guichard Dolphin.
John Duke of Alanson, Anthony Duke of Brabant,
The brother to the Duke of Burgundy,
And Edward Duke of Bar: of lusty Earls,
Grandpré and Roussi, Falconbridge and Foix,
Beaumont and Marle, Vaudemont and Lestrale.

“Here was a royal fellowship of death,” says Henry, as he hands back the list to the French Herald, and this royal roll-call is made to sound all the more shocking when contrasted with the names of the English dead whom Henry calls next:

Roll calls can be created from place names too. In Dylan Thomas’s radio play, Under Milk Wood, the Rev. Eli Jenkins compares his little local River Dewi with the great rivers of Wales:

By Sawdde, Senny, Dovey, Dee,
Edw, Eden, Aled, all,
Taff and Towey broad and free,
Llyfnant with its waterfall,

And well before Thomas, A.E. Housman had gathered together the names of these Shropshire villages:

Clunton and Clunbury,
Clungunford and Clun
Are the quietest places
Under the sun.

One of U.A. Fanthorpe’s best-known poems, ‘Rising Damp’, is about the ‘little fervent underground’ rivers of London. She lists them:

And these names return to haunt the poem as the rivers themselves haunt the city, until the last stanza where Fanthorpe warns:

It is the other rivers that lie
Lower, that touch us only in dreams
That never surface. We feel their tug
As a dowser’s rod bends to the source below

Names ‘tug’ at us too. We could all call own private roll of significant places and significant people. Sometimes it is their very absence from us, and ours from them, that tugs. One of the most moving scenes in the recent TV adaptation of Birdsong was the calling of the battalion roll at the end of the first day of the Somme, when there was almost no one there to answer to their name. In the novel itself this moment prompts an extraordinary elegiac passage, which begins:

Names came pattering into the dusk, bodying out the places of their forebears, the villages and towns where the telegram would be delivered, the houses where the blinds would be drawn, where low moans would come in the afternoon behind closed doors ….

These reflections on names have been prompted by a short story I read this week consisting only of place names, specifically the names of villages and towns in Lincolnshire, Cambridge and Norfolk encircling the Wash. It’s the final story in Jon McGregor’s new collection, This Isn’t The Sort Of Thing That Happens To Someone Like You. All the stories are set in this part of East Anglia, which is one reason I bought the book: I lived as a child in this fenland area, and though it’s now nearly fifty years since I left, the village of Tydd St. Mary and the fields, dykes and drains between Tydd and the sea are still – to borrow a phrase from D.H. Lawrence – ‘the country of my heart’.

McGregor’s stories are experiments in the limits and fissures of language: their force often lies in the resonance of what is not said, of what slips into the silence either side of speech. So a story like Memorial Stone consisting of nothing but names arranged by sound and type (Tathwell to Maidenwell, Bag Enderby and Aby, Dogsthorpe, Hogsthorpe, Dogdyke and Quadring Eaudike – hundreds of names over five pages) is in effect a prose poem. Read aloud, it creates the same kind of mesmeric effect of repetition and variation achieved in music by Philip Glass, but with this difference: that each name, each village, carries its own history and its own stories, created from the memories of and about everyone who ever lived there: parish records, war memorials, roads, schools, houses – all names . 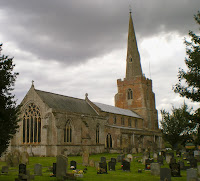 But there is one name missing from Memorial Stone: Tydd. The villages that lie around it are there: Sutton St. James, Leverington, Newton, Holbeach (the coldest place in England last week: -16°C). But no Tydd St. Mary (or St Giles, or Fen or Gote). As I searched for Tydd I felt disappointed, even offended. Somehow an injustice had been done. Absurd perhaps, yet this has preyed on my mind all week. But now I think I have found a way to put things right: I have come up with my own roll call of Tydd – roads, fields, people, pubs. Here it is: 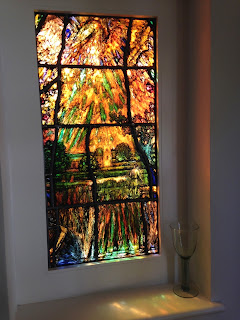 [illustrations: (i) Map of the Fens around the Wash
(ii) Tydd St. Mary’s Church photo: the author
(iii) Tydd Church in a stained glass window by Tom Denny (private collection)
Posted by Adrian Barlow at 01:09