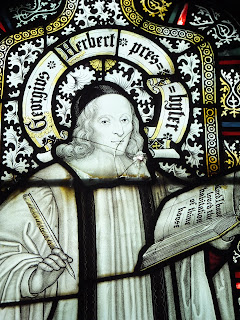 The other day I went to Beverley, in the East Riding of Yorkshire, to give a lecture on the stained glass of Charles Eamer Kempe. The lecture was entitled ‘Espying Heaven’ and the title derives from George Herbert’s poem, ‘The Elixir’:

A man that looks on glass,
On it may stay his eye,
Or, if he pleaseth, through it pass,
And then the heav'n espy.

It was a happy chance that just outside Beverley, in the village church of Bishop Burton, I came across an intriguing stained glass window by Kempe depicting George Herbert (1593-1633). It’s a good portrait, owing something to the only known  engraving of him. The poet stands holding a book which carries the neatly inscribed text, ‘Lord I have loved the habitation of thine house’, and it is as if Herbert himself has just written these words with the quill pen held in his right hand. In fact they come from Psalm 26 but they are absolutely appropriate to Herbert, whose chief book was his collection of poems published posthumously as The Temple.

The quotation, though, is puzzling: ‘the habitation of thy [it is ‘thy’ not ‘thine’ in both the King James Bible and the Prayer Book] house’ sounds tautologous, unless either ‘house’ here means family (as in ‘House of David’) or ‘habitation’ means the act of inhabiting a house rather than the house itself. This is actually the first meaning of ‘habitation’ given in the OED, and you could well imagine Herbert agreeing, ‘I have loved inhabiting the house of the Lord’. However, though in his own poetry he frequently uses ‘habitation’ he always means a place to live in:

My God, I heard this day
That none doth build a stately habitation
But he that means to dwell therein. (‘Man’)

In the Bishop Burton window Herbert is portrayed alongside Archbishop Laud, and perhaps Kempe (or the patron who paid for the window) wanted to suggest that Herbert shared Laud’s views on liturgy and doctrine. Which he may have done – though only so far, as Archbishop Rowan Williams has pointed out. Herbert’s own notion of church ceremonial gave greater emphasis to preaching than Laud’s ever did: his church at Leighton Bromswold in Huntingdonshire was re-ordered during his time as rector in absentia with not one but two pulpits. It is not for nothing that the nearest we have to a contemporary portrait of Herbert shows him wearing a Geneva gown of the kind usually worn by post-reformation preachers. For conducting services he may have worn a surplice and stole, as in this window, but he certainly would not have worn a purple cassock underneath, as he does here: look at his left sleeve peeping out. In other windows where Kempe* has depicted Herbert (there are at least five) he is always shown begowned. At All Saints, Jesus Lane, Cambridge, he stands, an austere black-gowned figure, in front of the Great Court of Trinity, his old college. The inscription for this window is also taken from Herbert’s poem ‘Man’:

Oh mighty love! Man is one world, and hath
Another to attend him.

Sad to say, someone in the East Riding has taken a pot shot at Herbert, the airgun pellet narrowly missing his shoulder but leaving a nasty crack across his face. It reminds us just how fragile stained glass is – as Herbert knew only too well. In his poem ‘The Windows’ he speaks of ‘brittle crazie glasse’, which puts it perfectly. He weaves a powerful conceit around stained glass:

LORD, how can man preach thy eternall word ?
He is a brittle crazie glasse :
Yet in thy temple thou dost him afford
This glorious and transcendent place,
To be a window, through thy grace.

But when thou dost anneal in glasse thy storie,
Making thy life to shine within
The holy Preachers, then the light and glorie
More rev'rend grows, and more doth win ;
Which else shows watrish, bleak, and thin.

Doctrine and life, colours and light, in one
When they combine and mingle, bring
A strong regard and aw :  but speech alone
Doth vanish like a flaring thing,
And in the eare, not conscience ring.

A preacher, says Herbert (and he is, as always, talking to and about himself), has the great privilege of being a window through which his congregation may ‘the Heav’n espy’.  But this will be possible only if the Christian story is ‘anneal’d’ - that is, sealed inside the preacher so that he speaks with genuine conviction just as the sacred images and stories are captured in a stained glass window through the glazier’s skill in firing the glass. But if that job is not done properly, the colour fades, the detail disappears and the window does indeed look ‘watrish, bleak and thin’. 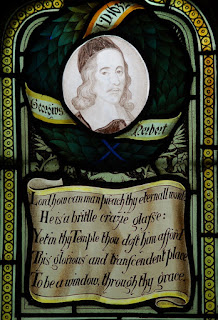 It’s a telling conceit, metaphysical in both philosophical and literary senses. And the final stanza, with its appositional phrasing, completes the conceit perfectly: as stained glass needs light to animate the images in the window, so doctrine is lifeless unless the preacher of that doctrine lives – practises – what he preaches. If not, if it’s just ‘speech alone’, then it is merely ‘a flaring thing’ and not the ‘colour and light’ which Herbert so admires in a beautiful window.

It’s therefore fitting that in the earliest and, as I think, the finest of Kempe’s George Herbert windows (West Kirby in Cheshire), the inscription beneath the portrait of the poet should be the first verse of the best poem ever written about stained glass, ‘The Windows’.

* ‘Kempe’ here indicates the work of the Kempe Studios, up to the time of Charles Kempe’s death in 1907; thereafter the work of C.E. Kempe and Co. until the eventual closure of the firm in 1934.

My new book, Extramural: Literature and Lifelong Learning, has now been published by the Lutterworth Press. I am now working on a book about the stained glass of Charles Eamer Kempe, to be entitled Espying Heaven.