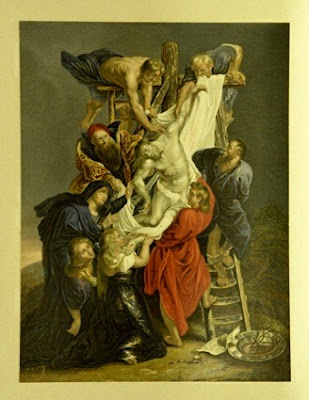 When I was a child, I was fascinated by a picture that hung in my father’s study. It was (as I learned much later) a Baxter Print of Rubens’ Descent from the Cross, (1612-14; fig.i) and I wish I had it now, for images of the Deposition – its alternative name – have a long history in stained glass, going back at least to the 12th century. None, though, are quite like Rubens’ altarpiece.

Rubens’ tableau has no fewer than five men, four ladders, three women, and the magnificently athletic but pallid corpse of the dead Jesus being lowered into the arms of John, the beloved disciple. To help take the backbreaking strain, St. John has placed his right foot onto the second rung of a ladder. In accordance with tradition, he is dressed in a red robe, while Mary is already in deep mourning. Joseph of Arimathea, swathed in a huge cloak and wearing a red bonnet, looks more like a Venetian magnifico than a member of the Sanhedrin. He holds one end of a white linen winding sheet; the other end is clamped between the teeth of one of his servants, who stretches over the cross piece of the crucifix to prevent Christ’s lifeless arm from flopping down.

The tableau is magnificently staged: Mary Magdalene kneels cradling Christ’s left leg as the body descends; behind her, the third woman (Salome, also kneeling) gazes up at St John, who seems to return her gaze. The props are all in place, too: the nails have been removed from the cross and lie on the ground. The piece of paper bearing the inscription ‘Jesus of Nazareth King of the Jews’ in Greek, Latin and Hebrew has been weighted down by a stone at the foot of the right-hand ladder. Next to it, on a silver charger, lies the discarded crown of thorns.

Compare Rubens’ Descent with this image (Chartres, early C13; fig. ii) from a window in Chartres 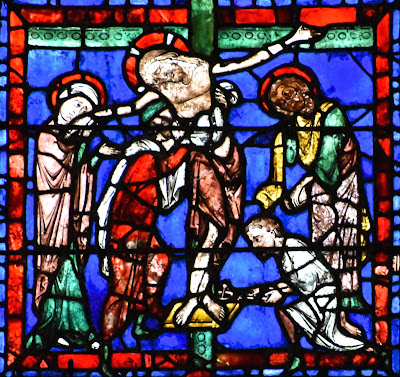 Cathedral. It’s part of a sequence of Passiontide scenes, each enclosed within a red frame; not entirely enclosed, however, for the top and bottom of the cross protrude above and below the frame. So, too, does the foot of the servant – or perhaps he is the executioner, still on the scene?  He kneels to extract the nail from Christ’s left foot, using a large pair of pincers for the job. After this, though, he may need a ladder to reach the nail still pinning the left hand of Jesus to the Cross.   Mary is already holding his right hand to her cheek while Joseph of Arimathea, next to her, strains to support the deadweight of his upper body. Joseph's foot, too, is now outside the red frame. By contrast with the Rubens tableau, here the only inactive one of the four figures around the Cross is St John, who seems overcome by grief. Both Mary and John have red haloes. So does Jesus but, as always, his halo is marked with three of the four corners of the Cross and now, for the first time, these marks recognize an historical event: they no long point forward to the destiny that would await him.

Why, finally, is the Cross green? This is an early example of a trope that appeared first in stained glass of the 13th century and was revived by Charles Eamer Kempe in the 19th century: the idea of the Cross as the Arbor Vitae, the Tree of Life. The Cross was shown as green to symbolise the idea that it was living wood - lignum vitae as St Bonaventure described it. If you think this idea too fanciful and suspect that the original artist simply wanted to use a third key colour, green, to offset the dominant red and blue, look again; along both the upright and the crosspiece you can see lines of bubbles flowing up and across. These symbolically represent the sap rising  - as can be seen in an earlier window at Chartres: the Jesse window(c.1150). At the foot of this window, Jesse lies asleep with the trunk of a tree springing up from his groin: the trunk is shown in cross-section, with the sap (Jesse’s seed, so less) clearly rising to indicate that the succeeding generations are his direct descendents.

I said above that I thought the man with the pincers was either a servant or perhaps the executioner.

Not everyone would agree. Malcolm Miller, the great authority on the glass of Chartres and a man I much admire, identifies him as Nicodemus, basing his identification both on the reference to Nicodemus in St John’s account of the burial of Christ (John 19:39) and on the fact that in a similar but earlier image of the Deposition in Chartres, the man with the pincers is more clearly Nicodemus because he wears a conical Jewish hat – as befits a man who, like Joseph of Arimathea, was a prominent member of the Jewish community in Jerusalem.

I am afraid I disagree with Malcolm Miller here. Not only in this image is the man shown without a hat, he is here wearing the plain short tunic of a slave, not of a high-profile Pharisee. There is a further point: in later stained-glass illustrations, as for instance at Fairford (Gloucestershire) the man assisting at the Deposition is very clearly the executioner. You can see him here (Fairford, c.1500; fig.iii) climbing down from the Cross with the body of Christ, floppy as a rag doll, hanging over his arm. And tucked carefully into his belt are the same pincers as seen at Chartres: instruments of the Passion, tools of the executioner’s trade.
Adrian Barlow

This is the second of three linked posts. Here is the link to the first: Reading Stained Glass: Maundy Thursday

Email ThisBlogThis!Share to TwitterShare to FacebookShare to Pinterest
Labels: Chartres, Malcolm Miller, Rubens, The Deposition, the Descent from the Cross