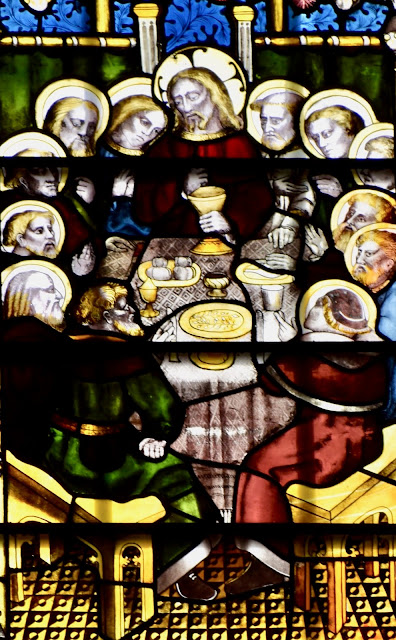 The first of three posts discussing ways in which the events of Maundy Thursday, Good Friday and Easter Day have been depicted in stained glass from the 12th century onwards.

I am interested in the different ways stained glass artists have portrayed Judas. Sometimes he is shown almost as a pantomime figure – black faced, even black haloed – clutching a moneybag. In the E window of St Edmundsbury Cathedral, the Last Supper (1874; fig. i) is cast in an almost lurid light: yellow and black tiled floor, benches even brighter than the brass dishes on the table.  Around this table Jesus and the twelve disciples form a tight circle. Jesus sits in the centre, St John, the beloved disciple, leaning his head on Christ’s right shoulder; St Peter, tonsured according to tradition, sits on his left. The faces of the twelve, offset by the whiteness of their haloes, are variously perplexed, apprehensive or reflective. With one exception: Judas, the man in green with his back to us, has no halo. Scowling and with his clenched fist pressing into his thigh, he has a moneybag already tucked under his belt. Only we can see this detail; the disciples are unaware of it. Judas does not look at Jesus, but his left hand hovers over a knife which points directly at him.

The fact that we know what will happen next gives this crowded image its power:  as soon as the meal is over Judas, who is conveniently perched on the end of a bench, will slip away to carry out his side of the bargain made with the Chief Priests.  Jesus, meanwhile, will head for Gethsemene, taking Peter, James and John with him to keep watch while he tries to find the courage to endure what he knows must follow.

A rather different Judas emerges from a 16th century window (fig. ii) at Woolbeding, a country church 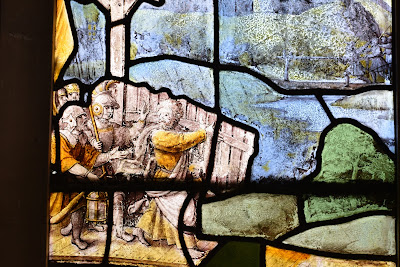 just outside Midhurst in Sussex. No longer compelled to sit as one of the twelve disciples, here he strides purposefully in front of a group of soldiers crossing a wooden bridge towards Gethsemene. The leading soldier wears an impressive plumed Roman helmet and shoulders a large flag; next to him a man carries both a lantern (by now it is nearly the middle of the night) and an ugly cudgel. In the background more soldiers are crossing a distant bridge; pikes and halberds of a sizeable troop can also just be made out – the silver staining shows signs of serious corrosion. What we can still observe, however, is that even as Judas gesticulates commandingly with this right hand, his left hand can just be seen still clutching the neck of the money bag and the thirty pieces of silver.

When William Morris first set eyes on Evreux, en route for Chartres, he was impressed. ‘We had only a very short time to stay at Evreux, and even that short time we had to divide (alas! for our Lower Nature) between eating our dinner and gazing on the gorgeous cathedral …. There is a great deal of good stained glass about the Church’  (letter to Cornell Price 10 August 1855). I wonder if he noticed the astonishing and disturbing image (fig. iii) of The Betrayal? 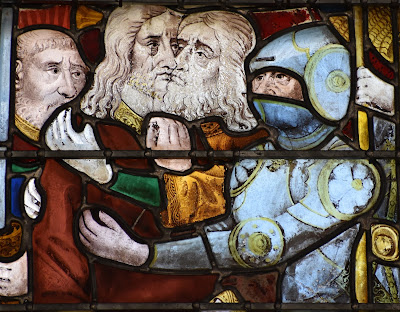 It comes from a 15th century window in Evreux Cathedral and captures the very moment of the kiss that will identify Jesus to the soldiers. But this is no cursory peck, as if to say, ‘Here’s your man’. It is an embrace between two men for whom such intimate contact is no surprise: eyes, nose, cheeks, lips could not be closer. Indeed, and this is what is so revealing, the two faces – Jesus and Judas – are almost mirror images of each other.  Every other piece of glass you see in this image depicting a face, hand or arm is enclosed within thick lines of lead; these two faces, the face of Christ and the face of his beloved enemy, are painted on a single piece of glass and nothing divides them.  Yet the eyes of the two men, betrayer and betrayed, do not meet.

We are forced, looking closely at this stained glass image, to ask why Jesus accepts so calmly this act of betrayal by a man he had chosen to be his friend. Simply because he has no option?  Or because he knows that only a short time earlier he had all but betrayed himself when pleading “Let this cup pass from me”?  And while the armour-clad soldier attempts to lay hands on his prisoner, Judas seems almost to be shielding Jesus from arrest.  Is he already trying to undo what he has just done?

Stained glass is an art of light, and the art of stained glass artists from whatever age lies in encouraging us to look more closely at images, scenes and stories we take for granted; to see them, indeed, in a new light.

Text and illustrations  © the author
Posted by Adrian Barlow at 15:20