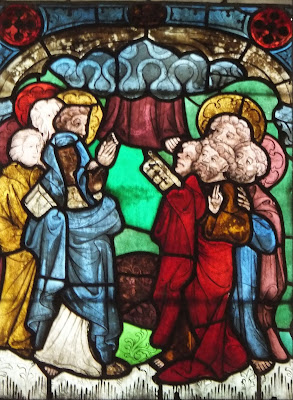 The Ascension is a difficult subject for stained glass artists. For a start, records are sketchy, Matthew and John making no mention of it in their Gospels. The most detailed reference (all of sixteen words long) is actually in the Acts of the Apostles, where the location is given as the Mount of Olives. Luke records that here Jesus left his last instructions to his followers and then, ‘while they beheld, he was taken up; and a cloud received him out of their sight.’

It’s not easy to depict someone in the act of disappearing, unless they are half out of the door. In the open air, it is even harder. The first Ascension window I ever looked at closely is on display in the HospitalKirche zum Heiligen Geist at Wismar, a Hanseatic port on Germany’s Baltic coast. It’s probably late 15th century, to judge by the rounded (i.e. ‘depressed’) arch which frames the scene. This arch indeed acts like the proscenium of a theatre where seven of the apostles, plus Mary the mother of Jesus, appear downstage half facing the audience. Here is Peter, his head tonsured as tradition dictates, his hand clutching the keys – or on this occasion just the one key – of the kingdom of Heaven; here too is the fresh-faced and clean shaven St John, the beloved disciple to whom Jesus had entrusted the care of his mother. Wearing a golden robe, he stands close by her side. Their backs are already turning away from the big event still going on behind them: Jesus floating upwards, his toes just peeping out below his once-purple robe, and the rest of his body now hidden behind the billowing folds of the blue stage curtain.

Except that this isn’t of course a stage curtain at all. The artist here has tried, not quite successfully, to emulate the conventional medieval way of illustrating the clouds of heaven. They should be more delicately scalloped, almost gathered like the folds of a ruff. Stained glass is always a collaborative effort and I’m sure more than one glass painter has been at work here: the faces of the apostles on the right have a certain vigour, even some sophistication; by contrast, their hands and toes – not to mention the toes of the ascending
Christ – are, as it were, all over the place.

My second example comes from St Mary’s, Fairford (Gloucestershire); if you have never been to Fairford, you should resolve to go – as soon as you can. The church has a unique, complete set of late medieval windows, all dating between 1500-1515. The Ascension window at St. Mary’s isn’t actually a whole window: it is one light* from a four-light window depicting post-resurrection scenes, and here the artist has made full use of the exceptional difference between the height and the width of his glass ‘canvas’. At the bottom of the light, Mary and the twelve apostles (including, anachronistically, Matthias, who had not yet been chosen to replace Judas Iscariot) have been on the Mount of Olives, clustering around Jesus and listening to his final words. I have never seen another window anywhere in the world that shows the hilltop of Olivet suddenly being shot up into the sky with such force that Jesus is simply launched towards heaven. All that can be glimpsed are the soles of his feet (still bearing the marks of the nails) for the rest of him has already disappeared into the sky. It looks to me as though some of the original glass has been lost here, but I am intrigued by the dramatic cloudscape at the very top. Either these are some of the earliest examples of naturalistic, as opposed to stylised, clouds represented in stained glass or (as I suspect) they are the work of a later – even much later – glass painter or restorer. Whatever the explanation, this stormy sky is not the least of the surprises in this most surprising Ascension scene. 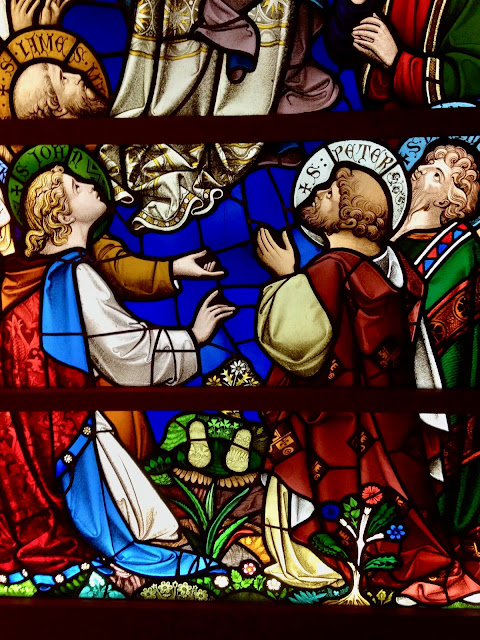 Finally, a window I have seen in Exeter (Devon) but, unusually, in different places at different times. I have seen it once in an exhibition in the city’s Royal Albert Memorial Museum and once in St. David’s Church. The present church was built at the start of the twentieth century on the site of an earlier church from which, I think I recall, this Ascension window was retrieved and now lives in a lightbox† in the small south transept. I cannot even say for sure who was responsible for this window, but on stylistic grounds I believe it may have been produced in the early 1860s by the London firm of Heaton, Butler and Bayne.

My picture shows only the scene on the ground, not the full window. Jesus is just beginning his ascent and the empty space he leaves behind is emphasised by the outstretched arms of Peter, James and John – all carefully identified by their names inscribed around their haloes – offset against the deep blue void. This glass is distinguished by its rich colours: the blue and red border of the green cloak worn by the apostle on the right (St. Bartholomew, with a finely drawn face); the sumptuously patterned claret of St John’s robe, and the red and blue flowers of the strange plant beside St Peter – NB, too,  the stylised pattern of keys just hinted at on Peter’s chestnut cloak.

Flowers and plants are everywhere among the grass: thistles, clover, daisies, pinks. And, right in the centre, the fronds of a vigorous fern point to the most unexpected feature of this (or almost any other) Ascension window. Though Christ has now gone from earth, he has left behind two clear footprints where his feet have pressed down the clover and the blades of grass on which, only a moment earlier, he had been standing. Footprints, famously, are evidence – evidence that Jesus was here and human and has left his mark to prove it. Perhaps, on this occasion, even Sherlock Holmes would have hesitated to point out that the feet are the wrong way round.

* ‘Light’: in medieval architecture, a window is divided into separate lights by the vertical stone mullions. A four-light window will have three mullions.
†A lightbox is an internally illuminated box frame which can display a stained glass window.