A ‘frail travelling coincidence’: Domodossola and The Whitsun Weddings. 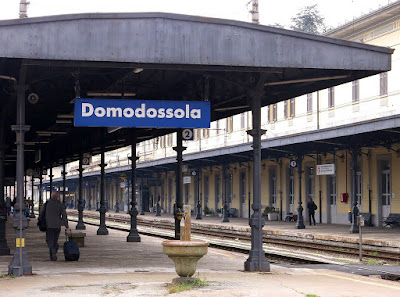 Marcus Hill and I have only one thing in common: we’ve each spent an uncomfortable night at Domodossola, an Italian town high in the Piedmont Mountains close to the border with Switzerland. We were both trying to get to Paris from Italy, as quickly as possible. This happened to me ten years ago. To Marcus, it happened in 1822.

My story first. We were a party of five, making our way by a devious overland route from Venice to Paris – our flights back to England having been disrupted by the volcanic ash eruption of April 2010. Hoping (vainly!) that from Paris we’d catch the Eurostar to London, we had managed to buy a string of local train tickets from Treviso to Vicenza, Vicenza to Milan, Milan to Domodossola, waiting there overnight before catching an early train through the Simplon Pass to Geneva, and on eventually to Paris.

We arrived at Domodossola almost at midnight. It was raining hard. Thankful to find a café in the Station Square still just open, we had a quick sandwich and beer but were soon turned out into the rain again, heading back to the station. Which was now closed: all lights out, all loos locked and the waiting room colonised by a group of barelegged tramps whose trousers were steaming over the heating pipes. The scene was not inviting. The five hours we sheltered on that platform live in my memory as the longest, coldest, wettest night of my life.

Now Marcus Hill. I begin with his full name and title, which add something to the story. He 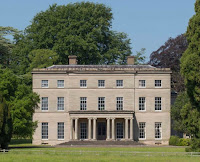 was christened Arthur Marcus Cecil Hill, and three years before he died he unexpectedly became ‘3rd Baron Sandys of the second creation’ with a country seat at Ombersley Court in Worcestershire. He was a younger son; his father was a cousin of the Duke of Wellington. By 1822 Marcus was already a promising junior member of the diplomatic corps, having served an apprenticeship in Madrid under the kindly eye of the British ambassador, Sir Henry Wellesley – Wellington’s brother.

He had then been fortunate to attract the attention of Lord Castlereagh, the foremost British diplomat and politician of his generation. Marcus referred to him as ‘my patron’, working for him while Castlereagh was Foreign Secretary, and afterwards criss-crossing Europe in the years following the Congress of Vienna. He was a young man of charm and loyalty, laying the foundations for what could have been a notable career.

But in August 1822, Castlereagh committed suicide. Marcus was devastated, suddenly losing not just the man who had become his friend and mentor but the man under whom, so he had assumed, his future career would have been assured. Fortune, however, had not deserted him: his mother wrote to Wellington, pleading with him to find a new position for her son. His Grace submitted gracefully, and before long Marcus found himself in Italy as a member of the Duke’s diplomatic entourage.

In early December, with the winter weather closing in, it was time to head home, but Wellington needed to return via Paris. He planned to travel from Turin via the Mont Cenis pass, which Napoleon had opened up in 1806 and which soon became the most popular route between Italy and France. Marcus, however, with the optimism of youth (he was 24) thought he could get to Paris before the Duke if he took a different route. Hoping to impress his new master, he reached Domodossola, engaged a carriage and horses and headed for the Simplon Pass.  He had hardly started, however, before the snow made further progress impossible, the postilions (as he later wrote to a friend) refused …

‘… all my bribes and did not wish to risk either their lives or mine in view of the dangers of the journey I was proposing. I thought they were cowards whereas in fact they were just being sensible, and I had to reconcile myself to spending the night in my carriage, waiting for day.’

Next morning the snow was already four feet deep. Duly chastened, he trudged back into Domodossola, afterwards reporting laconically that he had passed the body of a peasant who had frozen to death overnight.

***
British diplomacy and European history after the Congress of Vienna are definitely ‘not my
period’. But I have been fascinated by a book about Marcus Hill, lent by a friend who asked my opinion of it. The book is number 5 in a series entitled Sandys of Ombersley: Fragments of Nine Lives. They are all compiled by Martin Davis, the Ombersley Court archivist.

The word ‘fragments’ is important here: essentially the books bring together the source 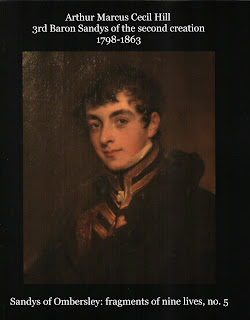 material – letters, portraits and other documentary evidence, with enough linking commentary to provide narrative coherence – that an historian or future biographer would find useful. The formula works very well, inviting readers to turn biographer themselves; certainly, I have found myself asking questions a biographer needs to ask – ‘What was Marcus Hill really like? Would he have deemed his own life a success or failure? He came to hate the diplomatic world, ‘the chicaneries of the profession, the continual state of change and uncertainty to which it is exposed’ and longed instead for ‘a quiet enjoyment of a country life in England where alone that state of happiness is known’. Later, after a long spell as MP for Evesham he decided not to stand again, pleading the demands of ‘a numerous and youthful family’. True enough: he had fathered ten children.

What caught my imagination first, of course, was his night in Domodossola. Then, once I’d made the connection between his experience there and mine, the phrase ‘ this frail travelling coincidence’ came to mind. You’ll find it in the last stanza of Philip Larkin’s fine poem, The Whitsun Weddings. The traditional Whitsun Bank Holiday was abolished in 1978, and Whitsuntide as a season in the Anglican year has all but vanished too; so just for the record I post this on Whit Sunday, 31st May 2020.

I have written before about my debt to archivists: In Praise of Archivists.