This is the second of two linked posts taking their title from a book I much admire, Lives of Houses.  In the previous post I introduced the home in which I lived as a young child: the Rectory of Tydd St. Mary (below), at the southern tip of Lincolnshire. The recollections that I offer now illustrate, I hope, the following claim by Hermione Lee:   ‘So it is with most imaginative returns to a lost home: the excitement and interest of dreaming one’s way back into the past life of the house also involve emotions of longing and missing.’1 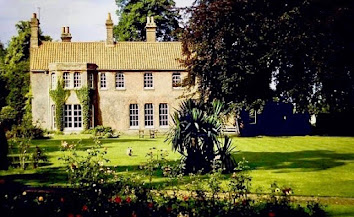 Not all Fenland rectories were as imposing as Tydd’s. When Lord Peter Wimsey came to stay at Fenchurch St. Peter, he found (as Dorothy L Sayers explains in The Nine Tailors) that handbell-ringing practice took place in the largest room of the Rectory, the dining room. Even so, the table had to be moved back against the wall to allow space for just eight ringers to sit in a tight circle.  Every year at Tydd Rectory, by contrast, the annual supper for bellringers and sidesmen took place in our hall, a room large enough to have once hosted all the stalls from the Village Garden Party when rain forced everyone off the Rectory lawns.

For this important supper a long table had been laid for twenty-five people down the centre of the hall. But the meal was only the prelude to the evening’s main event:  while pudding dishes were cleared away, the bellringers re-arranged themselves to give a recital of Christmas carols. They stood at the far end of the hall, behind another table on which handbells were placed ready to be picked up and rung as required. My brother and I were allowed to tiptoe downstairs in our dressing gowns and sit on the bottom step to listen. I only heard this once – in other years, I was away at boarding school – but that candle-lit performance is still unforgotten.

This hall was not part of the original Georgian parsonage, which was much more on the scale of Fenchurch St. Peter’s fictional rectory. When Tydd was dramatically enlarged in 1855 (architect: JH Hakewill) what had been the modest entrance hall, dining room and sitting room were all knocked into one long draughty space. But the staircase was still in its original position and beside it ran the short passage leading to my father’s study.

This was the one room of the Rectory that still had an 18th century feel. Lined with low cupboards and tiers of shelves almost to the ceiling, it could have housed a very respectable library. Dad’s collection of books was mostly theological, biblical and pastoral, with just a scattering of other subjects: travel guides, especially Switzerland; CS Lewis’s Surprised by Joy and, among only a few novels, Rose Macaulay’s The Towers of Trebizond.2 I wish now that I had talked to him about both these books, which in their different ways I much admire. But by the time I could have done, he wouldn’t have been able to remember them. 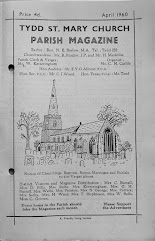 Although it was a big room – or so it seemed to me then – it always had an inviting feel. After breakfast we’d troop from the kitchen to the study for family prayers. I liked kneeling where I could peep at the blue Delft tiles lining the fireplace. There were two armchairs, an occasional table for coffee or a glass of sherry on Sundays, and Dad’s desk in the bay window. Here he sat each morning writing letters, attending to church business and editing the monthly parish magazine. And always, while he worked, he shared his study with an ancient black deed box looking down from the highest bookshelf behind him. Inscribed below the lock, in fading white lettering, were the words ‘WILLS & BOUVERIE’.

Endowed by two former rectors of Tydd, the Wills and Bouverie Charity paid for the clothing and education of four poor boys and four poor girls of the parish. The original rectory must have been built in the days of Dr. John Wills, though how much time, if any, he spent here I cannot say. Not only rector of Tydd, he additionally held the living of a village in Somerset while also being Warden of Wadham College, Oxford, from 1783 until his death in 1806. Between 1792-1796 he was even Vice-Chancellor of the University. John Bouverie, likewise, held the living of Tydd in plurality with one in Sussex; but he was also a Prebend of Lincoln Cathedral, so will have needed to keep at least a toe-hold in the diocese. He was a cousin of the great Tractarian, Edward Bouverie Pusey, and I can’t resist picturing Pusey ‘longing for holiness’ in this very study.

Every afternoon my father visited his parishioners – he thought this among his most important duties as Rector. After tea he’d retreat to the study to prepare his two weekly sermons, Mattins and Evensong, all duly dated, numbered and catalogued. (Eventually, my mother stuffed a pouffe with them: she had not the heart to throw away his life’s work.)

I am still puzzled why my father ever decided to come to Tydd. For me, the move from Birmingham to the Fens was the moment I felt myself coming alive, but my father was a Londoner who’d never lived in a village, knew nothing about farming or country life; he must have wondered, for the first few months at least, whether he hadn’t made a terrible mistake. But one night, before his first year was out, he went after supper back to his study to tidy his desk, turned on the light and was astonished to see an old man sitting in the bay window. 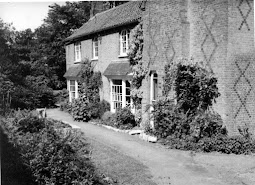 My father never told me of this moment, but he did tell my mother who – not long before she died – told me. Dad had recognized the man at once: his white beard and frock coat gave him away. He was the Rev. Charles Benjamin Lowe, who had been rector of Tydd for nearly forty years; he had died in the Rectory in 1904. A sepia photograph of him hung in the church vestry. The old man turned in his seat and appeared, if not to smile, at least to nod, as if acknowledging my father’s right to occupy this study that had once and for so long been his.

If you had known him, you would not have called Norman Barlow an impressionable man; all the same, this singular encounter seemed somehow to reassure him that, after all, Tydd and this house were where he and we were meant to be, and that our time here would be well spent. And so it was.

2. Rose Macaulay, The Towers of Trebizond, Collins, 1956. This novel is celebrated for its opening sentence: '“Take my camel, dear,” said my aunt Dot, as she climbed down from this animal on her return from High Mass.’

(fig.4) The bay window (nearest to camera) of the study at Tydd