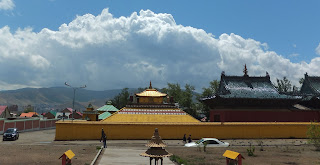 On Saturday 2nd June, I attended a concert in Gloucester Cathedral to mark the beginning of the Queen’s Diamond Jubilee celebrations. On Sunday 10th June I enjoyed a concert of music in Sudbury, Suffolk, performed by children from the town. In between I went to Mongolia and back.

The drive from Chinggis Khaan airport into Ulaanbaatar is not encouraging: roads in a dreadful state, traffic uncontrolled, pollution ditto; on either side gers, shanties, gas pipes, industrial wasteland and giant advertising hoardings; people picking their way between puddles and rubbish – a Jake and Dinos Chapman nightmare landscape writ large. But the city itself, sprawling across a plain surrounded by mountains, is mercifully different, full of quirks and contrasts. 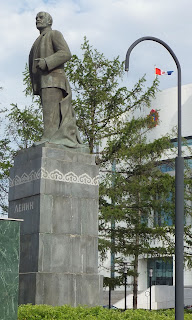 I’ve never been anywhere quite like Mongolia. It is a huge country sandwiched between China and Siberia, between the Gobi Desert and the Steppe, but nearly  half its population lives in one place - Ulaanbaatar, known by everyone there as UB. The Mongolian language, to my untutored ear, sounds like Mandarin with a Russian inflection, or vice versa. The script is Cyrillic – a legacy of the Soviet era too complicated to dismantle. And there’s still some nostalgia for that past. In the State Department Store (the name itself redolent of Communist control) I search for and find somewhere to get a new battery for my watch. In a far corner behind a small counter a woman sits mending watches, and on the wall behind her are large photographs of Soviet women heroes be-ribboned with as many medals as Borat in his new film, The Dictator. On a plinth outside the Ulaanbaatar Hotel Lenin himself still stands, larger than life, looking out over the city. Outfacing him on a giant cinema hoarding is a huge poster - advertising The Dictator. Ivan Illych  does not look amused. 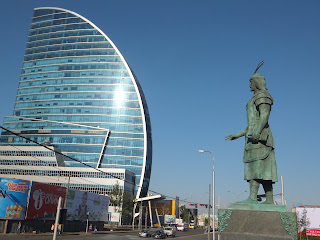 Someone else who looks out over the city is Marco Polo. His meeting with Kublai Khan is the starting point for Italo Calvino’s 1972 novel, Invisible Cities.  This is a book about fantasy and realism, and about the permeability of perception. It seems to chime eerily with modern-day UB. Marco Polo himself reflects at one point in the novel, “Perhaps all that is left of the world is a wasteland covered with rubbish heaps, and the hanging gardens of the Great Khan’s palace. It is our eyelids that separate them, but we cannot know which is inside and which outside.’ To this day, the rubbish heaps and the gardens exist side by side. In the late evening, someone has dossed down on the steps beneath the statue of Lenin; by the morning he’s gone, leaving behind his cardboard mattress, the detritus from his evening meal (cans, and then more cans; a pizza carton from the nearby Grab n’ Go fast food kiosk) and – carefully posed on the top step, as if an offering to the deity on the plinth – a teddy bear. 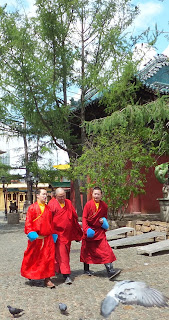 Offerings to rather different deities can be seen in the temples and Datsans (institutes) of the Gandantegchenling Monastery. Downtown UB this isn’t: the town planners seem to have abandoned a half-finished attempt to landscape the uphill approach to this imposing campus from which, beyond the tiled and tilting rooftops of the temples, one has a plain view of the hills. Campus is the right word for there is a university here too, the Buddhist University of Mongolia. I learn from a leaflet that ‘the University combines modern education with traditional teaching methods. Four year Bachelor’s degree programs are offered and currently there are two departments. The Department of Internal Sciences which includes majors in Buddhist Philosophy and Chanting; the Department of Common Knowledge which includes Tibetan, Sanskrit and English majors as well as a Traditional Medicine and Astrology major.’

I have to reprove myself for smiling at this description of common knowledge. Replace Tibetan and Sanskrit with Latin and Greek; English with, say, Rhetoric; add the elements of Internal Sciences, Theology and Philosophy, and you have something close to the curriculum of Cambridge in the 15th century. Even chanting is akin to the medieval practice of singing the daily offices: in the Vajradhara Temple, a group of young monks - all teenagers, their scarlet robes only more exotic versions of student gowns in England – is being taught to chant part of a service. Their tutor keeps a beady eye on them, but even so one bored monk manages to check the messages on his mobile phone without being spotted. I remember the words of the disillusioned monk in the closing lines of Basil Bunting’s 1932 poem, ‘Chomei at Toyama’:

I do not enjoy being poor
I’ve a passionate nature.
My tongue
Clacked a few prayers.

In six days it is hard to do more than register as many different images as possible: the DESTROY HAIR AND BEAUTY SALON with, unusually, its sign in English; the courage and unconcern with which pedestrians walk out into the surging traffic because if they didn’t no-one would ever get across the road; the steam engine, still emblazoned with the head of Stalin, parked beside a main road; the extraordinary new Blue Skies Building, facing the acres of Parliament Square where children play in pedal cars in the afternoon sun and students pose for graduation photographs before the steps of Parliament House.

At the top of these steps sits the largest statue of all: Chinggis Khaan (do not call him Genghis Khan here), revered not as the bloodthirsty monster of modern western imagination, and not just as the man who forged the vast Mongolian Empire but as the leader who established the Mongolian language, promoted education, cared for his people and insisted on being buried in an unidentified grave. Perhaps his nearest European equivalent would have been Charlemagne.

On the grand staircase of the National Historical Museum there is, in pride of place, the following glowing tribute to Chinggis Khaan, ‘King of Tartary’:

This noble kyng was cleped Cambyuskan,
Which in his tyme was of so greet renoun
That there was nowher in no regioun
So excellent a lorde in alle thing,
Hym lakked noght that longeth to a kyng.

This tribute is Chaucer’s, from The Squire’s Tale.

P.S. I was not on my own in Mongolia. My thanks to all my fellow education consultants who quickly became my friends; in particular to Tanya, Judith and Laurie - travelling companions with whom, improbably, I visited Beijing and Moscow airports in the same week.

[Mongolia images: (i) View of the hills beyond the city of Ulaanbaatar (ii) Statue of Lenin in front of Ulaanbaatar Hotel (iii) Statue of Marco Polo facing the Blue Skies Building (2012) (iv) monks at the Gandantegchenling Monastery (v) Parliament Building.  Photos by the author .
Posted by Adrian Barlow at 01:18