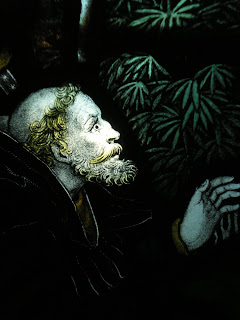 Short Measures is a very occasional series in which I discuss a short poem: no more than twelve lines. But I must begin this Christmas blog by admitting that I’ve broken my own rule: the lines below are actually part of a much longer poem. My defence is that these six lines are almost (a weasel word, I admit) a self-contained poem within a poem; it’s certainly true that they often appear on their own at Christmas time, detached from the longer poem to which they belong. That poem is ‘Hymn to the Nativity, sung by the Shepherds’, by the metaphysical poet, Richard Crashaw.

I am pleased to report that at the St. Sidwell’s C of E Primary School Nativity Play yesterday, the shepherds were in good voice. They needed to be: the cast of hundreds included a flock of sheep – a Nativity Play feature I had not previously seen. The local church was packed for the performance, which was met with great applause. For most of the children – 4 to 7 year-olds – it will have been their first experience of being on stage in front of an audience: something they won’t ever forget.

St. Sidwell’s shepherds, arriving at the manger and nudging the poor donkey out of the way in their excitement yesterday, put me in mind of Crashaw’s shepherds:

Welcome, all Wonders in one sight!
Eternity shut in a span.
Summer in winter, day in night,
Heaven in earth, and God in man.
Great little One! Whose all-embracing birth
Lifts earth to heaven, stoops heaven to earth.

These six lines, addressed to the child in the manger at Bethlehem, contain ten different paradoxes. Each one attempts to find a way of summing up the Incarnation: God in man - Eternity shut in a span, as the shepherds sing.

Crashaw’s Hymn is an eclogue. And since it is about a significant birth, it gestures towards Virgil’s celebrated Fourth Eclogue, the poem that foresees the birth of a child and the start of a new, golden age. Virgil begins:

Crashaw begins with a Chorus of Shepherds:

Come, we shepherds whose blest sight
Hath met Love's noon in Nature's night;
Come lift up our loftier song,
And wake the sun that lies too long.

This may sound at first like a piece of pastoral whimsy in the manner of ‘Nymphs and shepherds, come away’. Straight away, though, the conjunction of two opposites -  ‘Love’s noon’ with ‘Nature’s night’ – suggests that the ‘loftier song’ will be celebrating something more significant than Flora’s wedding day. After the opening chorus, two shepherds, Thyrsis and Tityrus, report what they have seen after their encounter with the infant Jesus and his mother:

The babe no sooner ’gan to seek
Where to lay his lovely head,
But straight his eyes advis’d his cheek,
’Twixt mother’s breasts to go to bed.
Sweet choice (said I) no way but so,
Not to lie cold, yet sleep in snow. 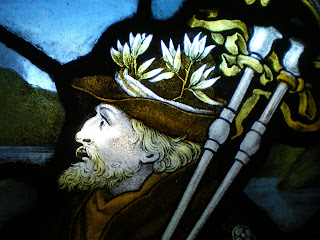 There’s something, I find, too artificial here, the poet pursuing the conventions of the eclogue and indeed of 17th century erotic poetry further than I want to follow. ‘Straight his eyes advis’d his cheek’ simply doesn’t work for me, artificiality descending to absurdity. By contrast the six lines beginning ‘Welcome all wonders’ communicates the excited bafflement the shepherds feel: their exclamation, ‘Great little one’, combines metaphysical paradox with naïve enthusiasm. Each of the paradoxes is succinct, epigrammatic even; but the way they come spilling out, one spiralling round another ( … ‘Lifts earth to heaven, stoops heaven to earth’) in a kind of poetic double-helix, is compelling and convincing. Does it matter that one wouldn’t realistically expect the shepherds to have spoken like this? Not in the least, surely. It reminds me of the opening words of Thomas Becket in TS Eliot’s play Murder in the Cathedral:

Peace. And let them be, in their exaltation.
They speak better than they know, and beyond your understanding.

Crashaw himself had a similar idea, which he worked out in a later verse of his Nativity Hymn, contrasting the shepherds that utter such heartfelt conceits with those ‘Slippery souls with smiling eyes’ who inhabit the courts of ‘earthly kings’. Crashaw’s ‘poor shepherds’ are

home-spun things,
Whose wealth's their flock, whose wit, to be
Well read in their simplicity.

One of this year’s highlights, for me, has been my discovery of the fine Kempe stained glass in the church of Cherry Burton, a village near Beverley in the East Riding of Yorkshire. The window there depicting the Adoration of the Shepherds supplies the illustrations to this blog, and I am struck by how well the artist who painted the shepherds’ faces has caught their look of astonishment, of being ‘sore afraid’. With characteristic antithesis, Crashaw has written about this too:

That the great angel-blinding light should shrink
His blaze, to shine in a poor shepherd's eye;
That the unmeasured God so low should sink
As prisoner in a few poor rags to lie …
That a vile manger his low bed should prove
Who in a throne of stars thunders above.

There is a further paradox, underpinning all these lines: the poem from which this verse comes is spoken as if by the voice of Satan. Banished into hell, he is astonished and unable to understand the great mystery of the Incarnation: how is it possible, he asks, that shepherds in the fields abiding should be literally enlightened in a way that is denied to him?

Borrowing that line from Crashaw’s Nativity Hymn, I’d say the answer is that those who, like the shepherds, are ‘well read in their simplicity’ may indeed know and understand more than those of us who pride ourselves on a ‘good' education.

Happy New Year, and – if you have been – many thanks for following my blog during  the past eighteen months!

[illustrations: details from the Adoration of The Shepherds window (by C.E. Kempe and Co., 1909) in Cherry Burton Church, Yorkshire East Riding.
Posted by Adrian Barlow at 05:09