On Q again: a Cambridge Centenary 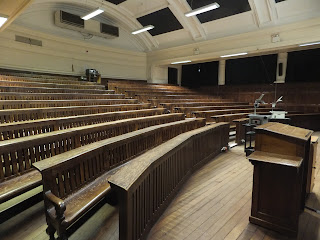 Last week I sneaked into the very lecture theatre and stood for a moment at the lectern from which Sir Arthur Quiller-Couch delivered his Inaugural Lecture as King Edward VII Professor of English at Cambridge, exactly one hundred years ago, 29th January 1913.  The theatre is remarkably unchanged. It occupies what was once the smartest new building in the University: the Arts School (1901), now the somewhat dowdy home to the Central Science Library. Sic transit gloria … but it could be worse. It stands right behind what was until recently the imposing Bene’t Street Barclays Bank, part of which is about to re-open as an Argentine Steak Bar.

Q’s Inaugural Lecture was a grand affair: the Vice-Chancellor and members of the Senate were there, and the lecture hall was crammed. I have written before about Q’s unexpected appointment, and many were eager to get their first glimpse of this new professor, who had a Chair but no Tripos and was head of a School which did not yet exist. Q didn’t disappoint them: his lecture was a manifesto for English as the academic discipline he conceived it to be, and he set out his vision of what a School of English could become.

Q argued first that English was not a subject at all, but a practice. This for him was a critical distinction. In the Preface to On the Art of Writing (1915), his first book written as Professor of English, he described himself as ‘a man called unexpectedly to a post where in the act of adapting himself, of learning that he might teach, he had often to adjourn his main purpose and skirmish with difficulties’. These difficulties centred on the opposition, within the University, not just to his appointment but to the very idea of English as a serious subject; intellectual opposition, therefore, to the possibility of Cambridge’s creating a School of English.

So much for the difficulties. But what was the ‘main purpose’ about which he wished to preach (his favourite term for the act of lecturing)? Q again:

It amounts to this – Literature is not a mere Science, to be studied; but an Art, to be practised. Great as is our own literature, we must consider it as a legacy to be improved …. If that be granted, not all our pride in a Shakespeare can excuse the relaxation of an effort – however vain and hopeless – to better him, or some part of him. If with all our native exemplars to give us courage, we persist in striving to write well, we can easily resign to other nations all the secondary fame to be picked up by the commentators. (Preface, p.v)

(Was it then Q, not C.P. Snow, who launched the Two Cultures debate?) By ‘commentators’ he meant followers of the German style of historical and philological criticism that had grown up in the nineteenth century. He distrusted these critics for two reasons. First, they seemed to him to deny the vitality of English literature by treating it as a ‘closed’ subject like Latin or Greek, whose texts existed like fossils to be excavated and subjected to an historical analysis that allowed no scope for appreciating literature ‘absolutely’ (a key term for Q, indicating a direct approach to the text – to its meaning and its  impact upon readers). Second, these commentators appeared to downplay the role of the writer by exaggerating the importance of the critic, and putting the emphasis on the critic as the arbiter of the text as a ‘literary’ object. Q would have dismissed the ‘death of the author’ as blasphemy against the very idea of literature.  It was no accident that he lectured first On the Art of Writing and only secondly On the Art of Reading (1920). And it was with a conviction amounting to anger that he announced, during a 1918 lecture ‘On Reading the Bible’:

The thoughts, actions and passions of men become literature by the simple but difficult process of being recorded in memorable speech; but in that process neither the real thing recorded nor the author is evacuated. (On the Art of Reading, p.128)

Q was a contradictory character: though one of the star lecturers at Cambridge, he advised his students against attending too many lectures; he also believed examinations were a threat to good English teaching, whether at school or university level: they encouraged teachers to focus on knowledge about literature (regurgitation of pre-digested, de-contextualised gobbets), whereas what students needed to learn, he passionately insisted, was an understanding of what literature was about. Thus, addressing the Vice-Chancellor on that January morning in 1913, he declared:

The man we are proud to send forth from our Schools will be remarkable less for something he can take out of his wallet and exhibit for knowledge, than for being something, and that ‘something’ a man of unmistakable intellectual breeding, whose trained judgment we can trust to choose the better and reject the worse. (On the Art of Writing, p.16)

‘Unmistakable intellectual breeding’ is not, to our ears, a happy phrase. Still, the idea that studying English should teach one discrimination sounds a note familiar to anyone who has ever read Leavis on ‘the common pursuit of true judgment’, or O’Malley and Thompson or David Holbrook; it was a note first sounded at Cambridge by Quiller-Couch.

Yesterday saw the 200th anniversary of the publication of Pride and Prejudice. Today’s centenary, Q’s inaugural lecture, may seem small beer by comparison, but not if we consider that we owe more than we realize – or than many people will acknowledge – to Q for articulating the modern idea of English as an open, creative and a critical discipline. I leave the last word to him:

In criticism of literature, which is (however it may disguise itself) in the end criticism of life, no word can ever be final; and the more it seems or affects to be final the less it can be true. (Studies in Literature, 1929, pp. 147-8)

[illustration: Lecture Theatre A, in the Central Science Library, Cambridge; formerly the Arts School, © the author.

This is the third time I have blogged about Quiller-Couch. The first post, On Q, was published in January 2011. Quiller-Couch: Cornwall, Cambridge and English, was published on 23 November 2012, the centenary of the announcement from Downing Street of his appointment as King Edward VII Professor of English at Cambridge.