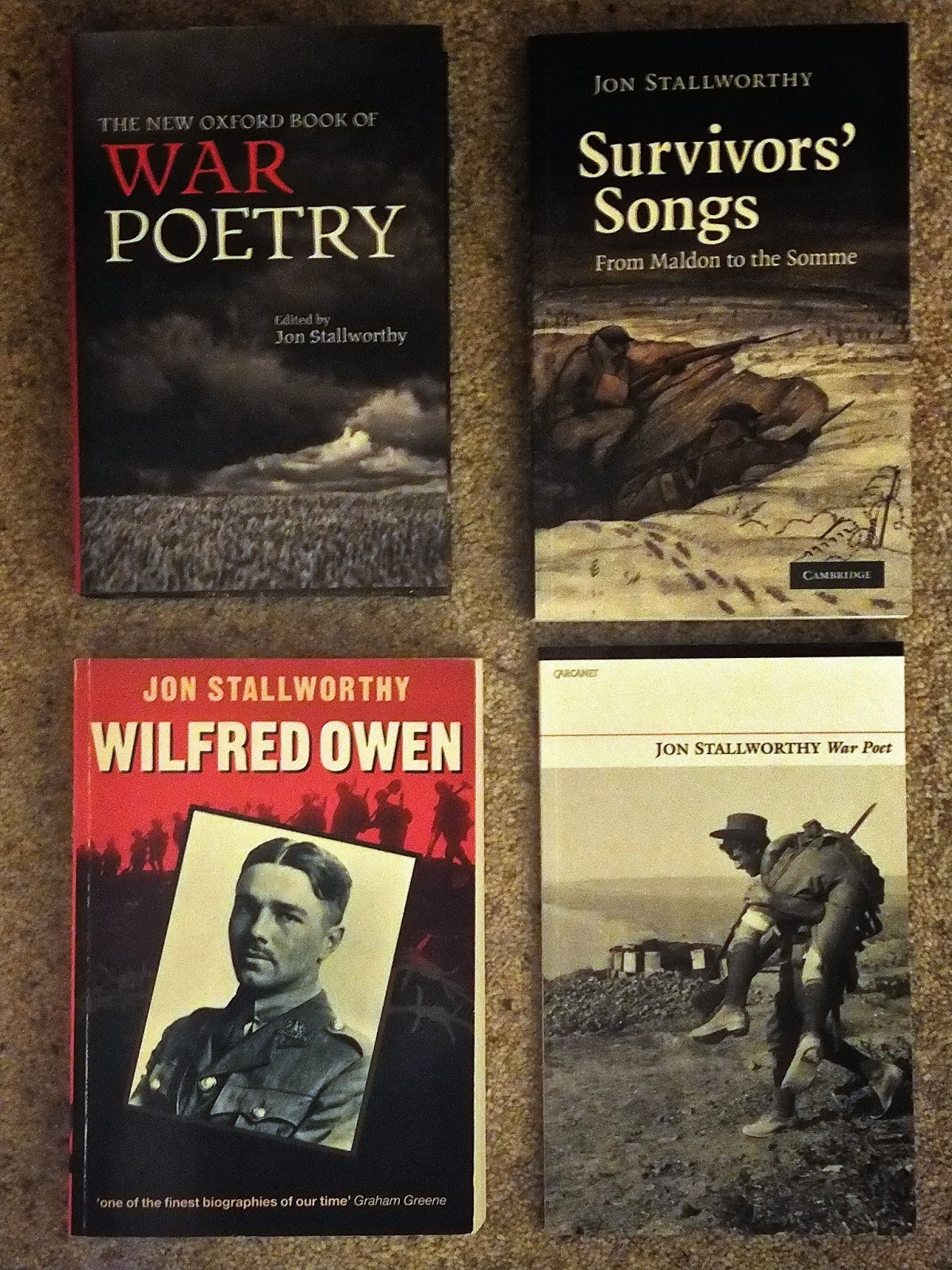 Nearly right. Jon Stallworthy was indeed patron of this conference (about which I have written before); sadly, however, by September he was already too ill to appear at Wadham. He had been due to speak after the Conference Dinner so, with characteristic care not to disappoint, he’d sent his speech in advance to be read by Tim Kendall, the conference convener. All of us sitting in Wadham’s splendid Hall agreed with Tim: if it hadn’t been for Jon, none of us would even have been at a conference on war poetry. I wish Jon could have heard the applause when Tim said that, but the Guest of Honour’s chair was empty.

For forty years after publishing his 1974 biography of Wilfred Owen, Jon presided over war poetry as a field of study, and his two-volume edition of Owen’s Complete Poems and Fragments (1983) stands as a monument to his editorial scholarship and sleuthing alike. His own account of this detective work (in an essay modestly entitled ‘Wilfred Owen and his Editors’), identifying and - by matching watermarks - dating sheets torn from different notebooks reminded me of Sherlock Holmes instructing Dr Watson (in The Sign of Four) how to distinguish different brands of cigar ash. He did much to ensure that war poetry never became a narrow academic byway. What, he once asked rhetorically, does Owen’s poem ‘Dulce et Decorum Est’ do? His answer was:

First of all, it persuades us that it is true; secondly, that its truth is shocking; and, thirdly, that we should do something about it. Owen offers us what a medieval rhetorician would call an exemplum, an example, an illustration of a man choking to death on poison-gas; that followed by a moralitas, a moral coda of passionate indignation. (‘The Mire and the Fury’)

Whether as teacher, writer or lecturer, he was always accessible, enthusiastic, even self-deprecating – though few people in the Humanities had less cause to be modest than Jon Stallworthy. His anthology The Oxford Book of War Poetry (1984) traced a 3000-year-long trajectory from Homer to Seamus Heaney, and for many readers opened up an entirely new perspective on what war poetry was and could be.

Stallworthy never wanted ‘war poetry’ to mean simply ‘First World War Poetry’; indeed, the term itself worried him.  In Survivors’ Songs he described ‘War Poetry’ as ‘an unsatisfactory category’ and ended a chapter on Rupert Brooke by saying: ‘Rupert Brooke is not a War Poet. He is a poet of peace, a celebrant of friendship, love, and laughter.’ He began the next chapter:

Siegfried Sassoon is commonly called a ‘War Poet’ – hardly a satisfactory label at the best of times, and more than usually unsatisfactory in Sassoon’s case. (p.178)

I heard him once admit to an audience of sixth-formers and teachers that he was worried he’d been responsible for the way the poetry of the First World War is today overvalued at the expense of the poetry of the Second. He was still worried this year: in the Foreword (‘Thirty Years On’) to the New Oxford Book of War Poetry (2014) he wrote:

The widespread ignorance of Second World War poetry is disturbing. Why it persists is a question cultural historians should address and a curriculum imbalance that educationalists should urgently correct. Too many schoolchildren (and too many teachers) need to be reminded how warfare – and poetry – have changed since 1918. (p.xxxv) 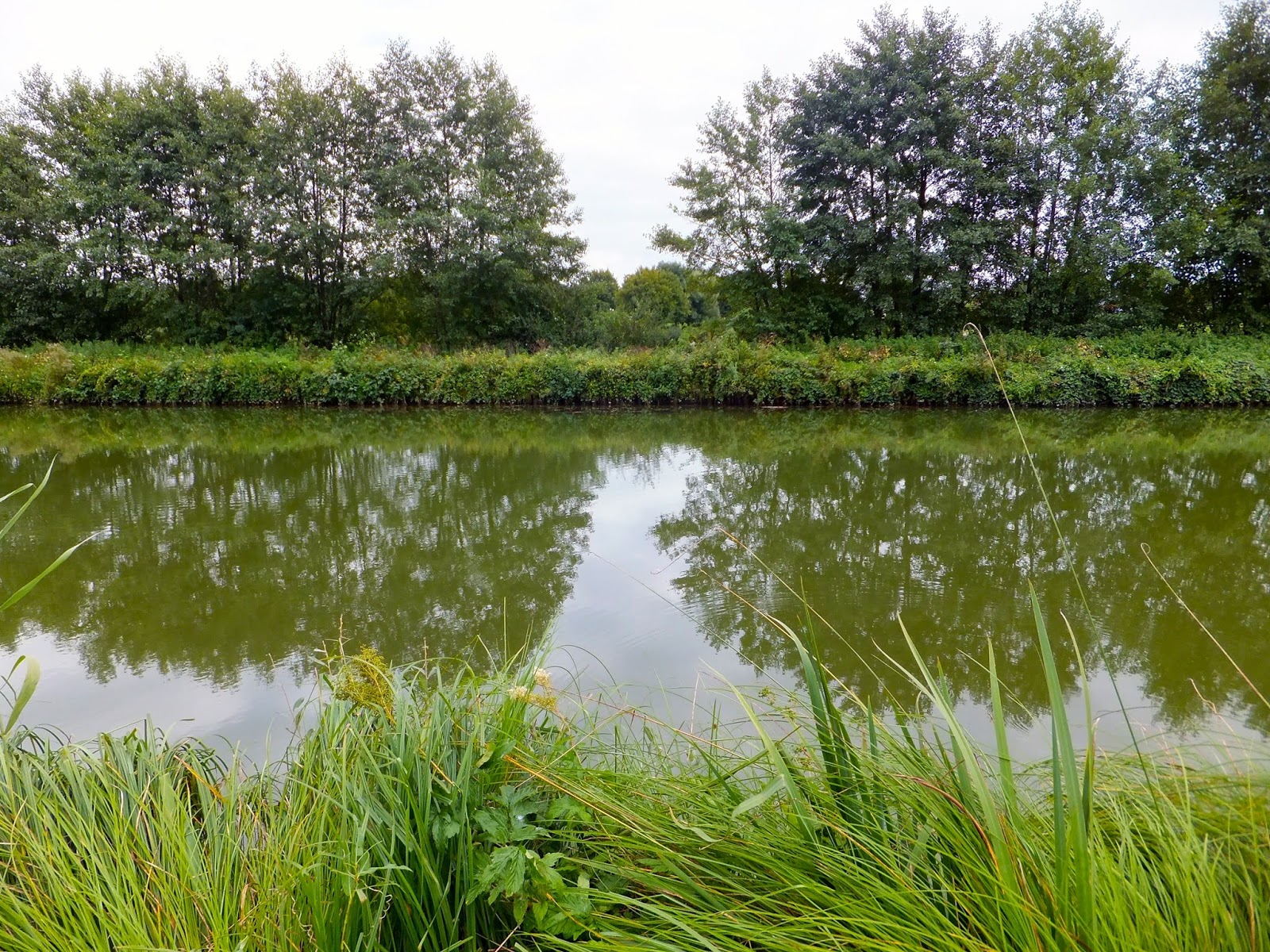 His books are beautifully written: compare his detailed, moving but utterly unsentimental account of Owen’s death with accounts offered by others – Dominic Hibberd’s, for instance, or Pat Barker’s at the end of The Ghost Road.  You’ll see what I mean.  Owen indeed came to define Stallworthy’s life as powerfully as he defined his reputation. In the Foreword to his 1994 edition, Wilfred Owen: the War Poems, Stallworthy thanked his wife ‘who so good-naturedly and for so long accepted Wilfred Owen as a ghostly addition to the family’; and of course that ghost makes a dramatic appearance at the end of his own biography. On the evening of 11th November 1918, a week after being killed on the banks of the Sambre-Oise Canal, Wilfred appears to his brother Harold, who has not yet heard news of his death.  Harold is stationed on a ship off the coast of Africa, and comes down to his cabin to find a smiling Wilfred sitting, waiting for him. Stallworthy offers this account of their strange meeting, told in Harold’s own words, as the first evidence of what he calls elsewhere ‘Owen’s afterlife’.

But, as biographers and scholars sometimes discover, you can spend too long with ghosts, and I think Jon Stallworthy may have come to find Owen a troublesome presence. In ‘Goodbye to Wilfred Owen’ he described in unsettling terms his

cold struggle to break free – from whom?
I am not myself, nor are his
hands mine, though once I was at home
with them.

I think his much-admired biography Louis MacNeice (1995) was another attempt to break free and, certainly, Stallworthy deserves credit for reviving interest in MacNeice’s poetry. But he could never quite leave the war poets behind. In ‘Voice Over’, his valedictory introduction to Survivors’ Songs, he wrote

I have spent many of the most rewarding hours of my life listening to the voices of absent friends – Thomas Hardy, William Yeats, Wilfred Owen, David Jones, Wystan Auden, Keith Douglas, and Old Uncle Tom Eliot and all … and I think of the essays in this book as thank-you letters expressing gratitude in terms that, I hope, may lead other readers to listen to their voices and hear in them what I have heard. (p.x)

Teaching readers to listen is why teaching poetry matters; and I shall always be grateful to Jon Stallworthy for sharing with us what he himself had heard.

(This post is an adapted and extended version of an appreciation to accompany the report in the English Association Newsletter of the Wadham Conference, of which Jon Stallworthy was patron.)

‘Voice Over’, ‘The Mire and the Fury’ and ‘Wilfred Owen and his Editors’ are essays in Jon Stallworthy, Survivors’ Songs (Cambridge: Cambridge University Press , 2008)

‘Goodbye to Wilfred Owen’ is collected in Jon Stallworthy’s volume of his own poetry of war, entitled War Poet (Manchester: Carcanet, 2014)

[illustrations: (i) some of Jon Stallworthy’s publications; (ii) the Sambre-Oise Canal today, close to the spot where Wilfred Owen was killed.