In London, with Charles Lamb 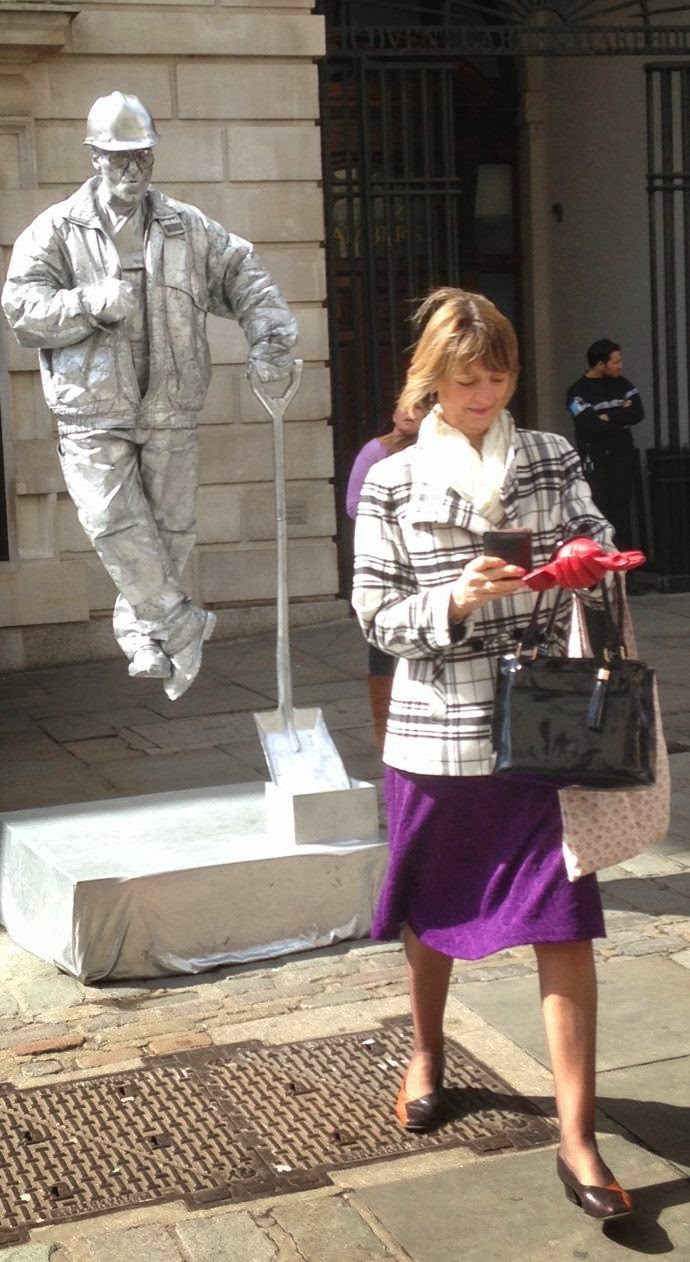 I have found myself in London for the past two Saturdays, a rare occurrence. Charles Lamb called London ‘a pantomime and a masquerade’, and he wasn’t wrong. In Covent Garden last Saturday, street performers were everywhere: fire-eaters, conjurors, mime artists who present the disconcerting illusion of actually sitting or walking on thin air. Fewer musicians than I remember: the finest buskers I ever heard were in Covent Garden: two men dressed in tail coats and playing con brio Handel’s Water Music, arranged for Souzaphone and penny whistle. But all human life was there, just as Lamb once described it in a letter to Wordsworth:

'I have passed all my days in London, until I have formed as many and intense local attachments as any of you mountaineers can have done with dead Nature. The lighted shops of the Strand and Fleet Street; the innumerable trades, tradesmen, and customers, coaches, wagons, playhouses; all the bustle and wickedness round about Covent Garden […] the crowds, the very dirt and mud, the sun shining upon houses and pavements, the print shops, the old bookstalls, parsons cheapening books, coffee houses, steams of soups from kitchens, the pantomimes – London itself a pantomime and a masquerade.' (30 January 1801)

And today, a week later, I am in Bloomsbury, here to give a lecture on Charles Lamb. Elia himself

might have thought Queen Square, where I have been walking for a while this morning, a bit too quiet; indeed, I have it almost to myself, which suits me very well. Queen Square lies between Southampton Row and Great Ormond Street, one side of it lined with hospital buildings - neurological, neurosurgical and homeopathic. The Children’s Hospital is just beyond.  At the east end of the square is a building I once knew well. Looking more like an embassy than a hospital (there is an imposing, if somewhat Ruritanian, achievement of arms above the front door) is the Italian Hospital. The nurses are (or were) Italian nuns: my mother was once a patient there for a month. She said the sisters were the kindest nurses she’d ever encountered.

Outside the hospital is a paved area, and here someone has been busy: the flagstones are covered with poetry, chalked by a visitor who must have spent much of the night composing a poem in what W.H. Auden once called ‘a rapture of distress’. He raps of hunger and of meditation, of the kindness of strangers and the coldness of the stones; but he ends with this question:

Charles Lamb would have delighted to read this. In ‘A Complaint of the Decay of Beggars in the Metropolis’ he lamented attempts by the City authorities to ‘extirpate the last fluttering tatters of the bugbear Mendicity from the metropolis’. Of the old beggars he says, ‘There was a dignity springing from the very depth of their desolation; as to be naked is to be so much nearer to the being a man, than to go in livery’.

Poetry becomes Queen Square: Faber & Faber used to have their headquarters here, and in the gardens – fenced off but open from dawn to dusk – I find a circular basin commemorating the Queen’s Silver Jubilee of 1977. Engraved on the paving stones beneath it, but dust-filled and fading already, I make out this verse:

I like the confident use of the poet’s surname – an echo perhaps from a time when to add ‘Philip’ would have been unnecessary. And walking round the basin I find another verse:

Larkin and Ted Hughes, Faber poets both. And there is more poetry to be found all around the garden: the paths are lined with seats, each one given in memory of someone who had either been a doctor working in one of the hospitals overlooking the Square, or a patient or a resident. Two commemorate victims of the Trident air crash of 1972, another a more recent victim of the London bombings. Several contain quotations: ‘Memory holds a seat’ says one, echoing Hamlet. Another quotes Samuel Beckett:

Close by, a bench given in memory of one who died young offers a plaintive comment: “The question ‘Why?’ will always remain unanswered.” Then, further on, a three-month old child who died perhaps in Great Ormond Street: the boy’s name was Elias. I think of Lamb again. Elia was his alias. 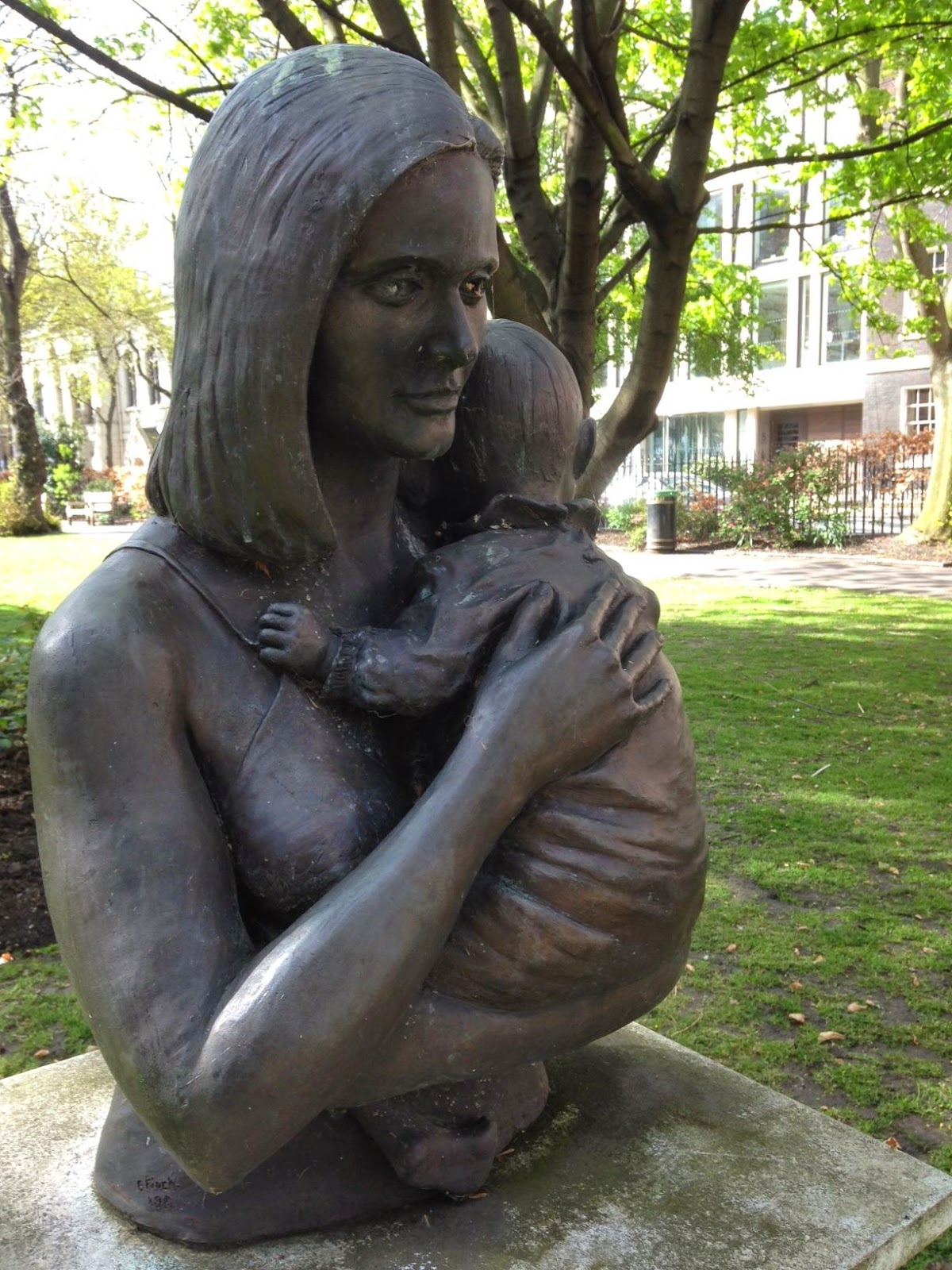 I was quite wrong to think Queen Square might not have appealed to him. Lamb loved children, and wrote about them with an affection all the more touching because he had none of his own.  Coram’s Fields and the Foundling Hospital, where mothers queued to hand in for safe keeping the children they could not keep themselves, are only a block away. Charles Lamb and his sister Mary once adopted an orphan girl. He knew about separation and loss – ‘All, all are gone, the old familiar faces’ he wrote in his one still-famous poem   – and in the middle of Queen Square today stands a sculpture of a mother and baby, clinging to each other, the child twisting a tiny finger under the strap of its mother’s dress, resisting all possibility of separation.  In Dream Children: A Reverie Lamb dreams he is indeed a father, surrounded by a loving family. The waking from this dream is as hard for the reader as for Elia himself. The children fade and, fading, seem to whisper to him:

We are nothing; less than nothing, and dreams. We are only what might have been.

It’s time to go and give my lecture.

I have written about Lamb once before, in Charles Lamb and Cambridge, and this was the subject of the lecture I gave.

[illustrations: (i) A mime artist in Covent Garden; (ii) Street sign in Queen Square (iii) Sculpture by Patricia Finch (2008) in the Garden of Queen Square