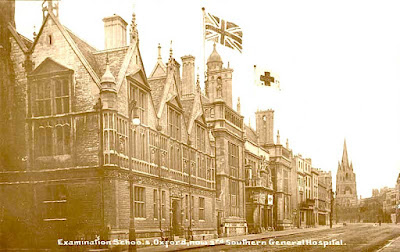 ‘Most of you, I suppose, entered Oxford from the railway station in the western suburbs, and a guidebook ought, therefore, to begin with a description of the things you will see coming up Park End Street, New Road, Queen Street and High Street.’  Thus begins A Handy Guide to Oxford, published by O.U.P one hundred years ago this summer – a centenary that should not, I think, go unremarked. From the start, the author has a specific readership in mind:

But I gather that you were usually so much occupied in abusing the uneven surface of these streets, while you were being jolted to your Hospital, that you had little chance of admiring the County Jail, the Assize Court or the Canal Wharf [….] But you must not be too hard on the City of Oxford for your jolting; we cannot afford to repair our roads in war-time, and most of the men who normally repair them are gone to fight.

Here is a vade mecum with a difference: ‘This little book,’ claimed its author, C.R.L.Fletcher, ‘was specially written as a guide for the wounded, in June 1915, when I was attached to the Third Southern General Hospital, as Tobacconist-in-Chief and Matron’s head Fag. The profits of sale were given to the Fund for supplying Tobacco to the wounded in that Hospital.’ He is not joking.

Fletcher was a don at Magdalen, and even today his old college is ambivalent about their former Fellow: ‘His views were far from progressive and are best described as imperialist, conservative and strongly opposed to co-educational teaching – he refused to admit any women to his lectures’. According to Magdalen’s website, Fletcher’s volume of Reminiscences ‘regarded West Indians as lazy, sentiments mirrored in his A School History of England (1911), written with Rudyard Kipling, which claimed that all Spaniards were vindictive and all Irish ungrateful.’

Fletcher clearly wears his prejudices without apology, but he quickly warms to the task of describing and explaining the University to men who would never normally have found themselves there. He is keen to point out that Oxford, too, is playing its part in the war. Explaining the function of the Examination Schools in the High Street – which had by then been become the city’s main military hospital – he describes how, only a year earlier,

In those rooms in which the nurses give you such tender care, young men were writing for their lives, six hours a day [….] Most of those young men are now either in the trenches in Flanders, France or Turkey, or drilling recruits of the New Armies preparatory to going; and many of them have already fallen asleep upon the Bed of Honour.

‘Writing for their lives’ ...  fighting for their lives; No Man’s Land … ‘the Bed of Honour’ – such phrases perhaps suggest Fletcher’s difficulty, in 1915, of finding language appropriate to the realities of war.  Describing the colleges, however, he’s on safer ground, happily mixing history and Common Room gossip, with occasional architectural comments thrown in. Modern architecture provokes his wrath (for Fletcher, modern means anything after Sir Christopher Wren): the Victorian architect William Butterfield is condemned as ‘the worst architect in English history’. Butterfield’s Keble College (1871), he claims, is ‘the crowning triumph of his style – a style hardly equalled for ugliness even in America.’ 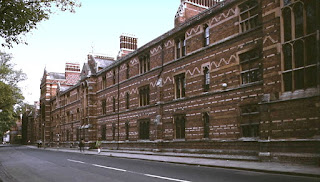 Not content with that sally, Fletcher has another thrust at Butterfield a few pages later. Here, after extolling the beauty of Merton, one of Oxford’s oldest colleges, he announces that

The prospect of the whole college from the south is spoiled by only one thing, the very ugly pile of new buildings erected on the site of the ‘Grove’ in 1864 by that same Butterfield who filled up the cup of his iniquity seven years later by perpetrating Keble College.

Poor Butterfield! But Fletcher’s architectural eye could sometimes spot a good building even in unpromising places:

In the depth of the slums which surround the remnants of the Castle one occasionally meets fine old houses mouldering to decay; one of the finest in Oxford is situated in Paradise Square, in the heart of the populous and squalid parish of St Ebbe’s ….

The most unexpected, and (as it seems to me) revealing page of the Handy Guide to Oxford, is its preface, a pastiche of Pilgrim’s Progress. Likening the wounded soldier arriving in Oxford to Bunyan’s Mr Great-heart, and the Kaiser’s army to the evil Apollyon, Fletcher begins thus:

And I saw in my dream how Mr Greatheart came to Oxford city, to be healed of the wounds he had gotten in the fight against Apollyon. When he had lain a month there, tended by Christiana and Mercy and Faith and the other sisters whose names are writ in the Book of Life, when, I say, his hurts began to be on an healing, [sic] he made shift to go abroad betwixt his crutches to view that city.

Now Bunyan’s Great-heart was ‘a strong man, so he was not afraid of a lion’, but this latter-day namesake, venturing out of the Examination Schools (renamed the 3rd Southern General Hospital) and looking up and down the High, is at a loss to know one college from another, until

… there met him presently a man with white hair who spake very civilly to him thus, “Mr Greatheart, you have saved me and this my city from Apollyon, and I shall reckon it an honour if you would take this one small book that I have made for your sake.”

The white-haired man is of course Fletcher himself, and the book he proffers – one of the quirkiest, yet also one of the most telling, publications of 1915 – is his Handy Guide to Oxford

… which the other thankfully took and thrust in his bosom; for what with the manage of his crutch he lacked an hand to hold it as he hobbled away. And the white-haired man went upon his way and Mr Greatheart saw him no more.

C.R.L. Fletcher, A Handy Guide to Oxford (Oxford: O.U.P. 1915; reprinted 1925). All quotations above are from the 1925 edition. I am grateful to my friend Brian Cairns for introducing me to this remarkable little book.

[Illustrations: (i) The Examination Schools in the High Street, Oxford; requisitioned as the 3rd Southern Counties Hospital during the First World War; (ii) Keble College, Oxford, by William Butterfield, 1871.