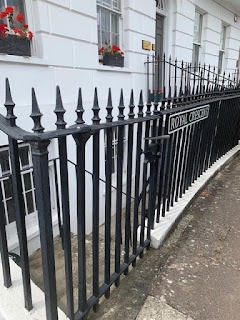 In the weeks since Lockdown began my wife and I have walked, to our amazement, considerably more than 500 miles in and around Cheltenham: main roads, side roads, avenues of lime trees – I had never realised before this year how strong and sweet the scent of Tilia platyphyllos (broad-leaved linden) can be – and footpaths through woods, through fields or along ancient tracks such as the Salt Way across Cleeve Hill or the wooded walks on top of Crickley Hill. Ivor Gurney, writing from France during the First World War, remembered both:
You hills of home, woodlands, white roads and inns
That star and line our darling land, still keep
Memory of us; for when first day begins
We think of you and yours –
Trees, bare rock, flowers
Daring the blast on Crickley’s distant steep. (Crickley Hill)
Gurney’s ‘darling land’ was always Gloucestershire.
One of the delights of these walks has been exploring lanes and footpaths we’d never found before, some quite close to home. Opposite Cheltenham College Chapel is a walled passageway I’m particularly pleased to have discovered: Olio Lane. As you enter it from Sandford Road there is a white gate, bearing a name I first misread as Bone House. Could there really be an ossuary behind the wall? I wondered nervously. In fact, it read Boyne House – one of the College boarding houses, and possibly (according to the College itself) the earliest school boarding house of the Victorian era.
I like to think that the novelist Anthony Trollope would have known Olio Lane: he once rented a house in

Paragon Buildings, the other side of the wall. Did he know that ‘olio’ means ‘a medley or hotch-potch’ (according to Dr. Johnson) and comes from ‘Ollo’, the Spanish for a hot-pot or stew? Probably. Trollope enjoyed both words and food, his 47 novels proclaiming the former and his generous girth the latter. Why isn't there a blue plaque for Trollope in Cheltenham? There should be: his novels tell us a lot about the social nuances of the town in the mid 19th century. Chapter 15 of Can You Forgive Her? (1864-5) is entitled ‘Paramount Crescent’, and in Trollope’s day, the paramount crescent in Cheltenham was Royal Crescent, where the young Princess Victoria had stayed briefly in 1830. 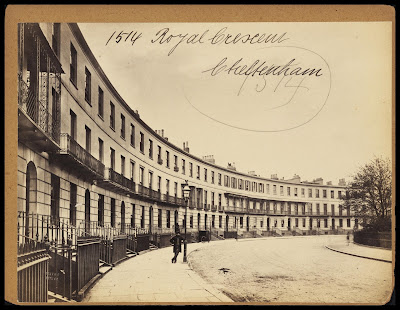 Like so much of Cheltenham built in the last twenty years of the 18th century and the first twenty of the 19th, the houses of Royal Crescent were not intended to be private houses; they were designed as lodgings rented by people coming to the town for a few weeks, or for a season, to take the Spa waters that had become a major tourist attraction, ever since the visit of King George III in 1788. At No. 3, Paramount Crescent, in Trollope’s novel, lived the widowed Lady Macleod who ‘occupied a very handsome first-floor drawing room, with a bedroom behind it, looking over a stable yard.’ All the details here count; the first floor, the piano nobile, has the largest reception room with tall windows opening onto a balcony. Such a room would certainly have been (in the language of lettings agents of the 1860s) ‘very handsome’. On the other hand, Trollope is clear that Lady Macleod has had to make sacrifices:

The vicinity of the stable-yard was not regarded by the tenant as among the attractions of the house, but it had the effect of lowering the rent, and Lady Macleod was a woman who regarded such matters. So she pinched herself, and inhaled the effluvia of the stables ….

Cheltenham was evidently on Trollope’s mind at this time. In the same year that he published Can You Forgive Her?, he produced Miss Mackenzie, a novel about ‘a very unattractive old maid, who was overwhelmed with money troubles’ (his own words) even though she was only thirty five and by no means as unattractive as his dismissive comment suggested. At the start of the novel, Margaret Mackenzie comes unexpectedly into some money, and with this new-found (but short-lived) independence she decides to move to Cheltenham – now called by Trollope Littlebath. She takes furnished lodgings in the Paragon, but this is not the same Paragon Buildings in which Trollope himself had lodged with his family a dozen years earlier:

It is a long row of houses with two short rows abutting from the ends of the long row, and every house in it looks out upon the Montpelier [sic] gardens. If not built of stone, these houses are built of such stucco* that the Margaret Mackenzies of the world do not know the difference. Six steps, which are of undoubted stone, lead up to each door. The areas are grand with high railings.

Six steps because the ground floors are raised above street level to allow room for a basement below. The more steps, the more elevated the ground floor and the more light that can seep down into the area (the narrow space at the foot of the area steps leading to the servants’ entrance into the kitchen and staff quarters) and through the basement windows. These days, though, the area steps more often lead to the front doors of what are euphemistically called Garden Flats.
Social distancing – though the phrase of course not then current – was understood rather differently in Trollope’s time: going up the steps to the front door or down into the area below street level was the physical expression of the idea of living and working above or below stairs. Tempora mutantur: words and expressions likewise change with the times. One street I had never walked down before Lockdown was Eldorado Road, its name reminding me of nothing so much as ice cream or the ill-fated TV soap opera of the early 1990s. But the reality was very different: sober redbrick late-Victorian villas, standing well back from the road and guarding their privacy behind high privet hedges – a perfect architectural statement of social distancing.
© Adrian Barlow
*Stucco is a cement render, covering external brick walls on buildings all over Cheltenham, which can be painted or sculpted to look like stone. The houses of Royal Crescent, illustrated above, are all decorated using this technique.
Illustrations:
(fig.1) The area steps and railings of No.1 Royal Crescent, the house where Princess Victoria stayed in 1830, seven years before her accession.
(fig.2) Anthony Trollope
(fig.3) Royal Crescent, Cheltenham, a photograph from the Francis Frith archive, Copyright Victoria & Albert Museum. NB The oil streetlamp with a miniature chimney pot on top.
I have blogged about Anthony Trollope before:
Anthony Trollope’s Own Goals
Trollope Adrift on Salisbury Plain
My book Extramural: Literature and Lifelong Learning (Lutterworth Press 2012) contains a chapter about Trollope’s Barchester Novels: ‘Trollope and Religious Controversy’, pp.64-80.
Posted by Adrian Barlow at 14:17