Posthumus, alas! Where is thy head?

I must admit it wasn’t Anglican piety that drew me to Ely Cathedral on New Year’s Day, 2010, but the need to take some photographs for a series of lectures on Cambridge architecture I’d been asked to give to the Cambridge Green (formerly Blue) Badge Guides. I wanted pictures to demonstrate the links between the Bishop’s Palace at Ely and the Gatehouse of Jesus College, and between the Wren Library at Trinity and the north transept of the cathedral. I wanted, too, to re-photograph the interior of the second finest cathedral in England on a day when the clear winter sunlight made flashlight unnecessary.

It was very cold in the cathedral, and even the formidable Gurney stoves in the aisles could barely offer local warmth. These great ribbed cylinders, each surmounted by a Queen Victoria-style crown, must be terrific gas-guzzlers, but they used to be coal-fired. I have a clear memory of being in the cathedral on a bleak and gloomy winter afternoon many years ago and seeing an aged verger pushing a trolley laden with buckets of anthracite from one Gurney to the next. It was like a moment from an M R James ghost story – ‘The Stalls of Barchester Cathedral’, perhaps, for which I suspect Ely was the setting. In the half-light, there was something sinister about the glow of the red-hot stoves.

However long ago was that? I found myself murmuring a barely-remembered line of Horace: ‘Eheu fugaces, Postume, Postume’. To my surprise, I could recall the exact date: 1st January 1975 - thirty five years ago to the very day. What’s more, I could remember exactly why I was there. I had been attending a course at Madingley Hall (my first) which ran from 28th December over the New Year until 2nd January. On the last afternoon, one of the students announced she was going to drive over to Ely Cathedral, which she had never visited before, and asked if anyone would like to join her. In those days I had no car and was only too happy for the chance to re-visit the first intact medieval cathedral I’d ever seen.

(Why say ‘intact’? Why ‘medieval’? Because I was born in Birmingham: so the first cathedral I ever entered was St Philip’s, a fine Georgian building, and the first medieval cathedral in which I set foot was the ruined shell of Coventry. Then, when I was six, we moved from the Midlands to the Fens, and Ely in those pre-Beeching days was just a short train journey from Wisbech.)

The Madingley course was on Shakespeare’s late plays. It was run by John Andrew and Leo Salingar, and one of the guest lecturers was Richard Luckett, then a junior fellow at St Catharine’s College but for many years afterwards the Pepys Librarian at Magdalene.‡ He and I had been at the same school (St.John’s, Leatherhead) and in the same house. I reintroduced myself to him after his lecture and we kept in touch until we each had left Cambridge . Richard was a remarkable person,  one of those people one may not have  known well but whom one is grateful to have known at all. 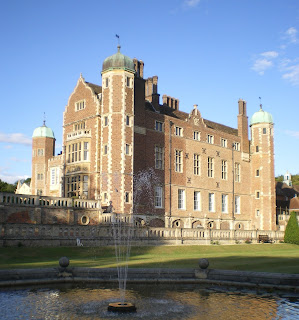 We were only a small group - not more than fifteen or so. Several of us were young teachers, but one student was the then recently retired Agnes Latham, shortly to publish her Arden Shakespeare As You Like It. For me it was a memorable course in every way. I would not have spent the most rewarding years of my career teaching in Cambridge for the University’s Institute of Continuing Education, if I hadn’t spent those six days at Madingley. And I remember the exhilaration of the classes, held in the Hickson Room. Leo Salingar, the distinguished scholar of Elizabethan and Jacobean drama, was developing his theory that Shakespeare’s profoundest insights were found in the comedies, not the tragedies. His book Shakespeare and the Traditions of Comedy  had just appeared in print and contained chapters elaborating the ideas he teased out with us on that course.

He and John Andrew sparred cheerfully, Leo defending Cymbeline against John’s tongue-in-cheek charge that the play was almost unactable and all but unreadable. “Why should Shakespeare have sent poor Imogen all the way to Milford Haven, for goodness sake?” asked John. Leo, of course, had the answer. “Is there any scene in Shakespeare more absurd,” demanded John, “than the moment when the hapless Imogen wakes from her drugged sleep to discover a headless corpse beside her, which she promptly mistakes for her beloved Posthumus?” (It actually belongs to the treacherous Cloten.) “It doesn’t have to be absurd,” argued Leo: “act it and see.”

And we did. On New Year’s Eve, in the Saloon, we rehearsed and then acted scenes from the late plays. Anne, a drama teacher from Solihull, gave a performance as Imogen which won great applause, and no one laughed when she reached the lines:

People said Susan Fleetwood, playing Imogen that year for the RSC, could not have done better. My performance too was praised. I was the headless corpse.

Illustrations: (i) Ely Cathedral, seen from the south east; (ii) Madingley Hall, home of the Institute of Continuing Education, University of Cambridge, Photos   © the author

*Translator’s notes: (i) I don’t believe in literal translation of poetry. Here I have picked up William Cowper’s echo of Horace in ‘The Poplar-Field’: ‘My fugitive years are all hasting away’. (ii) pietas of course means devotion to one’s friends, family, ancestors and country – as in ‘filial piety’ – rather than religious observance and behaviour.

‡Richard Luckett (1945-2020): summed up by The Times in its obituary of him (19.12. 20) as an ‘unworldly and whimsical Cambridge don, polymath and Pepys Librarian [….] One of the fabled dons of his time, Richard Luckett came to embody Magdalene College, Cambridge. His fund of recondite knowledge was a continual source of comedy and delight to all who knew him, but it also enabled him to enhance the fabric and collections of the college, its music, its reputation, and the scholarly endeavours of others in many disciplines.’