What is (or was) Cambridge English? 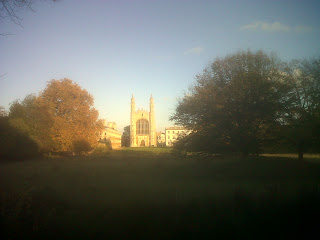 On a late autumn afternoon in Cambridge I am with a group of cheerful Chinese visitors who are enjoying the sun and the views along the Backs. They pose for photographs next to the smiling statue of Confucius in Clare gardens. From their shoulders hang tote bags emblazoned with the words ‘Cambridge English’ and, underneath, the strapline The most valuable English qualifications in the world.
Google ‘Cambridge English’ and you’ll reach the website of Cambridge ESOL which is a division of Cambridge Assessment, the ‘trading name’ of the University of Cambridge Local Examinations Syndicate, which is in its turn a non-teaching department of the University. Cambridge ESOL uses the label ‘Cambridge English’ as an umbrella for all the qualifications it offers in English for Speakers of Other Languages.  It defines ‘Cambridge English’ like this:
So, 'Cambridge English' is at once a brand (‘Cambridge’ itself is a powerful international brand), a set of language qualifications and an all-embracing variety of English. Behind those inclusive words ‘international’, ‘globally’ and ‘real world’ lurks mischievously another definition of ‘Cambridge English’ – that it is everything ‘Oxford English’ isn’t.  ‘Oxford English’ is the English of Brideshead Revisited or – for current viewers – the English spoken upstairs at Downton Abbey. It belongs, so the stereotypes suggest, to a narrow and out-dated world, time-bound, class-bound, exclusive,
And oh, so seductively superior, so seductively
self-effacingly
deprecatingly
superior. —
We wouldn't insist on it for a moment
but we are
we are
you admit we are
superior. —
Thus D H Lawrence scathingly in his poem ‘The Oxford Voice’. By contrast 'Cambridge English', at least as offered by Cambridge ESOL, presents itself as class-neutral, country and culture-neutral.
Cambridge English (this time without inverted commas) means something else, too. For much of the past century it has signified a philosophical approach to English as a discipline centred on the study of literature rather than language, and on the principles of close reading and practical criticism rather than historical, cultural or critical theory. When Sir Arthur Quiller-Couch (by training an Oxford classicist) delivered his inaugural lecture as King Edward VII Professor of English Literature at Cambridge (29th January 1913) he reminded his audience that the University Ordinance establishing this Chair had included the following statement:
It shall be the duty of the Professor to deliver courses of lectures on English Literature from the age of Chaucer onwards, and otherwise to promote, so far as may be in his power, the study in the University of the subject of English Literature. The Professor shall treat this subject on literary and critical rather than on philological and linguistic lines.
This definition at once distinguished Cambridge from Oxford English: at Oxford the study of English was decidedly linguistic and philological, beginning with Beowulf and Anglo-Saxon poetry, some five hundred years before the age of Chaucer. At Cambridge to this day, Old English is taught not by members of the English Faculty but within the Department of Anglo-Saxon, Norse and Celtic.
These differences between Oxford and Cambridge approaches to English are, in the twenty-first century, in most respects more apparent than real. But if you look at the Cambridge English Faculty’s website, you will see prime acknowledgement given to I A Richards for his defining contribution to English Studies – practical criticism; by comparison, F R Leavis gets only a passing mention. Yet for many people, even today, it is Leavis rather than Richards who embodies Cambridge English at its most influential and controversial.  Leavis himself believed this: “We were and knew we were Cambridge – the essential Cambridge, in spite of Cambridge,” he was fond of saying about himself, his wife and their Scrutiny circle.
Leavis himself was acutely conscious that Cambridge English and its Oxford counterpart were worlds apart. Late in his career at Cambridge he wrote to his old friend Tom Henn, who taught English at St. Catharine’s, about the new generation of people being appointed to teach English at Cambridge:
All I can see any point in saying further about Appointments is that we must stop the movement in of Oxford (all the Oxford men hate the Tripos) and the recruitment of alleged specialists in this or that period or subject: we desperately need men genuinely interested in literature, & intelligent about it in such ways as make them good teachers of intelligent undergraduates, and good examiners.
I came across this revealing letter, written in Leavis’s characteristic anguished hand, just the other day in the University Library Manuscript Room (UL/ENGL 2/13). I don't believe it has been published before. I found it unexpectedly while doing some research of my own into  teaching as the heart of Cambridge English from Quiller-Couch to David Holbrook. I mentioned Holbrook recently in The Singer and the Song, and I shall write more fully about him again before long because his key book, English for Maturity, is fifty years old this year – an anniversary no one seems to have noticed. As for Leavis’s letter, it too has an anniversary: it was written on 7th November 1961, fifty years ago today.
[photo: King's College Chapel from the Backs, 3.30pm Tuesday 1st November 2011
Posted by Adrian Barlow at 22:28