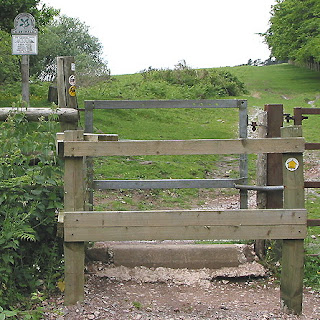 Three fields away from where I am writing this, in Gloucestershire, the ground rises steadily and there is promise of a good view from the top. And so it proves. Ahead of me I see the familiar profile of May Hill, a wide low hill with a clump of trees at the top. You can see it for miles from all directions. When I lived in the west once before,  I always knew the end of my journey was close when I could see May Hill.

May Hill had a special meaning for Edward Thomas, for it was here he used to walk with his new-found friend Robert Frost in the summer of 1914, walks on which they discussed poetry and Frost nudged Thomas towards becoming a poet himself:


The sun used to shine while we two walked
Slowly together, paused and started
Again, and sometimes mused, sometimes talked
As either pleased, and cheerfully parted
Each night. We never disagreed
Which gate to rest on.
Edward Thomas, ‘The Sun Used to Shine’
The only time I ever climbed to the top of May Hill myself I went to help a small boy fly a kite. This was at least thirty five years ago and the child can have been no more than ten, if that. But I remember the evening well, because I wrote a poem about it soon afterwards:

Le cerf-volant prend son essor,
Impatient, impétueux,
Sa voile vit dans le vent
Et le claquement de sa queue tourne en derision
Les efforts maladroits des gens à terre
Qui manipulent la ligne.
Comme une marionette mutine, d’abord
Il donne des secousses aux bras de ses maîtres,
Puis il les entortille, et enfin – agacée par le jeu –
Il s’écrasse en piqué …
Et on dit, plus tard, en descendant la colline,
”Mais cela semblait si simple!”
This was the only time in my life I ever wrote a poem in French. Stranger still, the poem almost wrote itself, quite quickly, in a kind of automatic writing: some of the vocabulary I used I hardly knew I knew. I realize now that I chose French because the poem was actually addressed to the child’s grandmother, a French artist called Bettina Peterich whom I knew and admired very much. I owned two of her pictures. One was of a bird in flight, a subject to which she returned repeatedly in her last years: always a single bird in space, on an otherwise blank sheet or canvas.
At the time of the kite-flying expedition to May Hill, Bettina Peterich was living with her daughter and grandchildren in Newnham-on-Severn, the further side of the hill. She had had a stroke and knew she was dying. She could no longer hold a paintbrush or a piece of charcoal; but, using an airbrush, she kept on working and while we were on May Hill,  she created a final image of her bird in flight.  The colour she had chosen was kingfisher blue, and the bird seemed almost to fly out of the canvas. After that, she stopped work and sat or lay on her bed, gazing at her picture. She died not long afterwards, but the picture remained on its easel in her room:
Mais ton oiseau libre, lorsqu’il prend son essor,
Est si calme, si carenné:
Il vague dans le vent, en traversant
Le ciel clair de sa toile.
“Qu’est ce qu’il cherche? Qu’est ce qu’il sait?”
Se demandent les gens à terre.
Et seulement les yeux prévoyant
Peuvent suivre ton oiseau qui voltage,
Qui est en équilibre en attendant son moment,
Qui sait bien ce qu’il cherche …
Et on dit, plus tard, en se détournant de l’image,
“Mais cela semble si simple.”
As I sit and enjoy the last of the summer’s swifts careering overhead, it feels good to be in Gloucestershire again.
Adrian Barlow
[photo: May Hill - the footpath to the summit
Posted by Adrian Barlow at 01:02 3 comments: