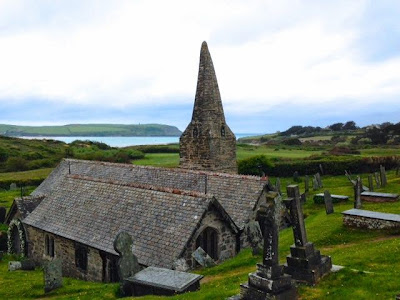 ‘The sky widens to Cornwall’. Because the tide is out, the ferry sets us down on the beach, well short of the slipway at Rock. I enquire from the ferryman the way to St Enodoc, and he points us towards Brea Hill, where we must climb over the dunes, take the path onto the golf links and then follow the fairway. This we do, facing into the fine rain that blows off the Atlantic and up the Camel estuary towards Padstow. The dunes are steep and take some negotiating, but at the top we see something I have never witnessed at close quarters before: first one, then two larks ascending. They take off vertically from the heather; I hear them before I see them, but I am near enough to see their beaks open and their throats vibrating as they sing. Rising a few feet at a time, they steady themselves in mid-air, then continue their ascension, singing all the time. The exaltation is mine as much as it’s theirs:

Lark song and sea sounds in the air,
And splendour, splendour everywhere.

These aren’t my words, though, they’re John Betjeman’s. Earlier that day I had been walking along the clifftops on the other side of the estuary, aiming for (but not reaching) Trevose Head, last visited during a Cornish family holiday fifty years ago. I recently led a study day on Betjeman: preparing for it, I read with attention some poems he had written about this same coastline in the same year I had visited them. 1966 must have been a bad year for Betjeman. ‘Tregardock’ begins with sea-fog and ‘The moan of warning from Trevose’:

Only the shore and cliffs are clear.
Gigantic slithering shelves of slate
In waiting awfulness appear
Like journalism full of hate.

At the end of the poem, he contemplates his own lack of courage (as he sees it) in the face of such contempt for everything he stood for:

And I on my volcano edge
Exposed to ridicule and hate
Still do not dare to leap the ledge
And smash to pieces on the slate.

It’s interesting that Betjeman, who sometimes over-punctuated his poems, uses none at all here – suggesting the accelerating pressure under which he all but throws himself over the cliff edge. He called his 1966 collection, High and Low, which title I had lazily assumed simply referred with characteristic nostalgia to High and Low Church Anglicanism. I see now it had another, darker purpose: while Tregardock records his lowest point, ‘Winter Seascape’, which finds him again standing on the cliff edge, this time celebrates a very different mood:

Here where the cliffs alone prevail
I stand exultant, neutral, free,
And from the cushion of the gale
Behold a huge consoling sea.

It was in 1966 that I, too, endured ridicule from my A level English classmates for daring to suggest that Betjeman deserved to be taken as seriously as W.H. Auden and the rest of the Thirties poets (I had just bought and read Robin Skelton’s Penguin anthology, Poetry of the Thirties). I do not think I was wrong. At that time, I based my argument on his celebrated hate poem, ‘Slough’. But discussing ‘Winter Seascape’ with the students at my study day, it became clear that this poem is in part a homage both to Auden’s ‘Look, stranger’ (‘Stand stable here / And silent be’) and to ‘The Sunlight on the Garden’ – from which Betjeman consciously recycles Louis MacNeice’s daring internal rhyme ‘under … thunder’. Going further back, I think ‘Winter Seascape’ even redresses Matthew Arnold’s ominous 'salt estranging sea’ (from 'To Marguerite - continued’), which becomes for Betjeman ‘a huge consoling sea’. 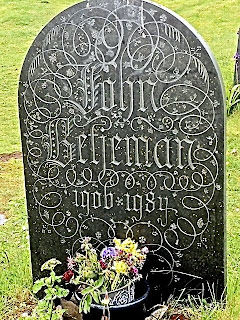 We make our way across the 10th fairway of St Enodoc Golf Course towards the little broach spire that juts crookedly up above a tall hedge of tamarisk. By now the rain has eased, unlike the day of Betjeman’s funeral in 1984 when coffin, pall bearers, mourners and reporters had to battle against what one journalist would later aptly call ‘Poldark weather’. A snatch of film shows the party entering the churchyard and passing, just inside the lychgate, the open grave ready to receive the late and by then much-loved Poet Laureate. As we approach, however, our eye is taken first by an arch of flowers – roses, gerberas and gypsophila – framing the entrance to the church porch: there’s to be a wedding next day. But this is my first visit, and I turn back to inspect Betjeman’s gray slate gravestone. By contrast with the wedding decorations inside and outside the church, the limp and fading flowers in a plastic pot are a sad sight.

Jonathan Glancey is an architectural critic whose journalism I have always enjoyed. He is a Betjeman enthusiast, too. Here’s his description of St Enodoc:

Betjeman is buried in the happily batty village church of St Enodoc, itself interned [did he mean interred? the church was once all but buried under sand] in an eccentric dip in the very middle of the golf course. Betjeman's gravestone, immediately inside the church gate, is a joy, all curly-whirly script, playfully elegant stone-carved eye candy for aesthetes.

Leaving aside ‘happily batty’, I can’t share Glancey’s appreciation of the gravestone, which seems to me to misrepresent the Betjeman to whom this church and churchyard meant so much:

So soaked in worship you are loved too well
For that dispassionate and critic stare
That I would use beyond the parish bounds
Biking in high-banked lanes from tower to tower
On sunny, antiquarian afternoons.

True, Betjeman as a young man could play the aesthete; true, too, he had (as editor of the Architectural Review and of the Shell Guides to Britain) shown a sometimes post-modern delight in typography. But I think he would have preferred some less self-advertising stone. After all, ‘As I reach our hill,’ he had concluded in his valedictory poem ‘Old Friends’ – also from High and Low – ‘I am part of a sea unseen’.

[References: all quotations from Betjeman’s poems above are taken from his Collected Poems (London: John Murray, 2006 edition). ‘The sea widens to Cornwall’ is the opening sentence of ‘Old Friends’ (pp.245-6), from which also comes the final quotation of this post. The lines beginning ‘Lark song and sea sounds’ are the final couplet of ‘Seaside Golf’ (p.165). Betjeman’s contemplation of suicide is in the poem ‘Tregardock’ (p.239), and the poem I suggest contains echoes of Auden, MacNeice and Arnold is ‘Winter Seascape’ (p.243). His admission that he loves St Enodoc ‘too well’ to describe it objectively comes from ‘Sunday Afternoon Service in St. Enodoc Church, Cornwall’ (p.113).

Text and photographs © the author.

I have written about Betjeman before: John Betjeman and Windlesham
Posted by Adrian Barlow at 09:09