In Praise of Street Art 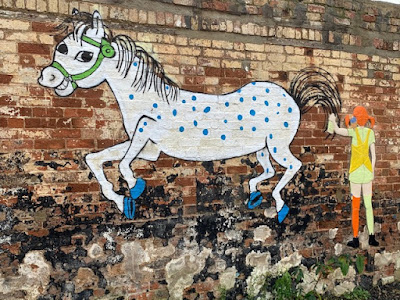 Street art created during recent Cheltenham Paint Festivals is starting to change the face of parts of the town. In the past nine months, when The Wilson has been closed, I have been glad to be challenged, amused, bemused and exhilarated by many of the artworks that now confront me on my daily lockdown walks. Much of the artwork created during these festivals, which last year took place over four days in early September, is located in and around the Station, Waitrose and St. Paul’s areas. Some of the best, though, can be found closer to the town centre.

Just behind the Royal Crescent, for instance, the Bayshill inn occupies one corner of the St James’ Square carpark and in 2018 the long side wall of this inn was painted with a powerful (but to me rather ominous) mural. A great golden archer, of heroic stature, is poised to fire a giant arrow into a glittering target but his arm is becoming encased in tendrils of vegetation that suggest the arrow will never be fired. It’s an image of arrested motion, eye-catching every time I have passed it, but it has distracted me from noticing until recently another and much more discreet artwork in an altogether different idiom, this one created on an adjoining wall during the 2019 Paint Festival. When the car park is full, you could miss it altogether.

If you approach from the road what you see first is a grinning blue-spotted white horse with a green bridle and blue hooves. It looks like the sort of horse you might have seen in a children’s book a couple of generations ago. Behind the horse stands a small ginger-headed girl facing the wall and wielding in her left hand a spray can, apparently to paint the horse’s tail. Approach from the other side, though, and the back-turned girl strikes you first. No longer looking so small, but still a child, she wears black boots and odd stockings: left leg, ginger to match her hair; right leg, pale green to match her tee-shirt dress. The stockings are held up by snappy suspenders with blue buttons – blue to match not just the spots and hooves of the horse but (we now notice) the blue jacket of a tiny monkey perched on her left shoulder. 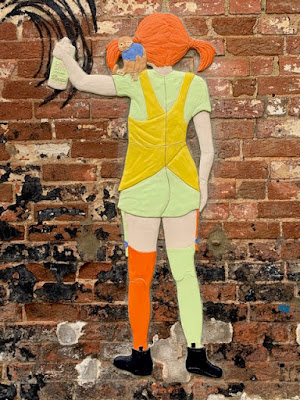 Come closer. At once we see that the girl is not herself spray painted. Unexpectedly, for a paint festival at least, she is created from a very precise assembly of ceramic tiles – 18 by my count. The effect is of a figure in low relief, glazed and standing out against the rough texture of the wall itself. For the wall is rough: red brick bearing traces of long-vanished coats of lime wash, black paint and (towards the ground) of patches of plaster, as if there had once been a dado. This is worth noting because whereas the painting of the archer on the Bayshill’s main wall completely obscures the brickwork (not to mention the guttering and down pipe) here the texture and blemishes of the wall have been incorporated into the picture: the patches of old dirty plaster could be puddles over which the horse is jumping, and the girl is instinctively lifting the heel of her right foot to avoid making her boot muddy. As a background, the reddish-brown bricks of the mottled wall play an important role in highlighting the whole picture – horse and girl together.

I like the reflexive way in which street artists sometimes incorporate the symbol of their profession – the spray can – into their work like this. I could point to several such examples around Cheltenham; but only here, on the Bayshill wall, does the spray-can hold the key to unlocking the whole picture. 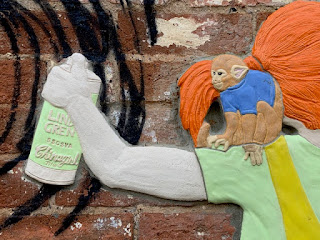 On the label is the word LINDGREN, which points us to Astrid Lindgren (1907-2002), the celebrated Swedish children’s author whose 1945 novel, Pippi Långstrump , introduced the world to an unlikely nine-year-old superwoman. Here is the UK’s National Literacy Trust, in 2020, extolling her virtues:

Pippi Longstocking has been an incredible role model for three quarters of a century. She’s a real advocate for justice, can sail a ship across the seven seas, carry a horse and beat the strongest man in the world …. We can all be inspired by Pippi Longstocking’s independence, kindness and love of exploration.

From her first appearance Pippi has been described and defined exactly as you can see her on the Bayshill Inn wall; the only thing you can’t see are her freckles. The monkey on her shoulder is her friend Mr Nillson. But who has brought her to this corner of Cheltenham?

Well, on the spray can’s label is a signature, Chinagirl, with the word TILE in small print underneath. When I had deciphered the ‘handwriting’, the name stirred vague memories of a David Bowie song, ‘China Girl’, written in the 1970s – ‘I’m just a wreck without my little China girl’.  As it happens, however, Chinagirl Tile is the professional name of a young Austrian street artist with a worldwide reputation. Her work can be seen around the world – London, Berlin, Seoul, Tokyo, Auckland – and she has had a major one-woman show in her home city, Vienna, at the Wien Museum. Internationally, she is known for her support for, and encouragement of, women as artists – hence perhaps her enthusiasm for the indomitable little girl  who can be seen at any time, here in Cheltenham, putting art on a wall.

Finally, the spray can’s label carries the initials SSOSVA. I leave you to look this one up for yourself. Chinagirl is a gentle activist, but a serious one. In her manifesto, BRING A DINOSAUR, Rules for Girls who want to be Street Artists, she lists fourteen rules, among them these:

9. The street is your canvas, a very powerful one too. Even small interventions will be seen.

10. Street art is a tool to send out messages. Use this power/burden wisely.

14. Be prepared to stand your ground.