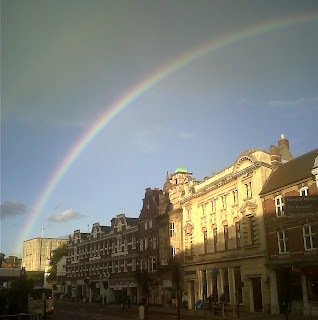 Short measures is a very occasional series in which I discuss a short poem (no more than twelve lines - shorter than a sonnet, therefore). Alas, for copyright reasons I can rarely publish a complete 20th. century poem or one by a living author. Suggestions for future poems to include in the series are always welcome.

My heart leapt up on Friday last week when I beheld a rainbow over Norwich Castle. At eight minutes past five I came out of M&S and saw the great arch of a perfect rainbow landing on top of the Norman Keep. It was a fine sight over what advertisers used to call ‘A fine city, Norwich’ - and unexpected, too: the pavements were dry and wherever else it had been raining, it wasn’t raining just then in Norwich.

My heart leaps up when I behold
A rainbow in the sky.
So was it when I first began,
So is it now I am a man,
So be it when I shall grow old
- Or let me die.
The child is father to the man,
And I could wish my days to be
Bound each to each by natural piety.

I suppose ‘The child is father to the man’ is one of Wordsworth’s best-known lines - along with, say, ‘I wandered lonely as a cloud’, ‘Earth has not anything to show more fair’ and perhaps ‘Surprised by joy, impatient as the wind’. But each of these three comes from the opening of a poem. Wordsworth himself, however, would later reproduce the last three lines of ‘The Rainbow’ as the epigraph to his great meditation on childhood, ‘Intimations of Immortality'.

As for ‘My heart leaps us’, these opening words were to echo in the title of one of Wordsworth’s poems of 1800, ‘Hart-Leap Well’. This is a longish poem that begins as a chivalrous ballad celebrating both the heroism of the huntsman and the endurance of the hunted stag. Oddly, the poem’s second half becomes a kind of anti-hunting polemic: no matter that the huntsman had admired the courage of the stag whom he had pursued to the death, the place where the animal had died becomes an accursed spot, a warning to future generations of would-be sportsmen: ‘the unspeakable in pursuit of the uneatable’, in Oscar Wilde’s neat apothegm.

But unlike the conventions of medieval and renaissance poetry, there is no play on heart/hart in ‘The Rainbow’ itself. The poem, at least its first six lines, seems almost naïve: di-dum di-dum di-dum di-dum, as schoolchildren would once have chanted it. Beware, though, of trivializing this miniature poem: ‘Wow! A rainbow! How exciting is that!’  No, this is more than just another ‘Surprised by joy’ moment.

Any good poem warns against the temptation to take words for granted. I think that ‘behold’ in the first line means much more than simply ‘see’. The word itself more often acts as a command – ‘Ecce homo’– ‘Behold the man!’ – or as an exclamation: ‘Lo and behold!’ Here, though, Wordsworth’s line implies that he simultaneously sees the rainbow and is awe-struck by it – a physical as well as emotional response already foreshadowed by ‘My heart leaps up’. He both beholds the rainbow and is beholden to it: the fact that he responds to it is, as he sees it, proof of his continuing humanity.

The rainbow is not described. By contrast with my trite phrases about the ‘perfect rainbow’ that was such a ‘fine sight’ over Norwich, Wordsworth’s rainbow simply is. Its power to move him is not just a memory from the past (‘when my life began’) that has stayed with him ‘now I am a man’; more importantly, it is a commitment to the future: ‘So be it when I shall grow old’. And if/when he fails to respond,  then it’ll be time to quit: the triple anaphora, ‘So was it - so is it - so be it’, is startlingly undercut by the immediate reversal, ‘ - Or let me die’.  There’s a confident assurance here, as elsewhere in Wordsworth, that nature will not let him down. Nor, for his part, must he fail Nature.

Some I suppose might call this moral earnestness priggish, for the rainbow is about more than pleasure, it is about a moment of passionate recognition, of spiritual illumination. It is a shock and a lesson to last a lifetime. Wordsworth argues repeatedly that Nature, what Coleridge calls (in Frost at Midnight) the ‘Great Universal Teacher’ is the source of mankind’s moral understanding. And like prayer for George Herbert, this is ‘something understood’ instinctively, not something readily put into words, taught in school or learned from books:

One impulse from a vernal wood
Will teach you more of man,
Of moral evil and of good,
Than all the sages can.

‘Or let me die’ is both a reversal and a bridge from the naive exhilaration of the opening lines to the mature meditation of the closing. For Wordsworth, that the child is father to the man is so self-evident it needs no explanation. Like the rainbow itself, this just is so: as adults we learn from, and build on, the experiences of childhood. I have always resented the condescension of those who tell children the ‘real world’ is what comes after school – but perhaps that’s because of the implication that teachers don’t live in the real world either.  Did Shakespeare, in As You Like It, coin the phrase ‘second childhood’? Very aptly, if so. During the past twelve months I have spent more time involved with the very elderly than at any other period of my life. Children can literally become parents to their parents. Wordsworth was right.

Finally, ‘natural piety’. Piety used to mean the duty of loyalty and love children owe their parents. Virgil’s Aeneas wasn’t pious because he was always on his knees: he acknowledged the duty due to his father Anchises. For Wordsworth, that piety is both a natural impulse and an impulse of loyalty to nature itself. So, in ‘The Rainbow’ he simply says that this dual impulse is what - all being well (‘I could wish’) - will keep us going for a lifetime. It’s a grown-up idea, carefully planted in a childlike, but not childish, poem.