From Middle Earth to Banana Moon 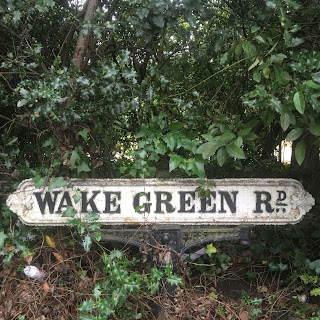 Wake Green Road, Birmingham 13, connects the urban village of Moseley with what was once real country. It starts approximately where Moseley station (now defunct and disappeared) once stood – and climbs steadily away from the city for a couple of miles until it ends abruptly at a big roundabout. Birmingham was once surrounded by Greens, most of which survive only by name: Yardley Green, Bordesley Green, Acocks Green – the southern suburbs encompass them all. I remember those names well, for I was born in that part of Birmingham, but I had never heard of Wake Green until last year.

These days, however, walking the Wake Green Road is something I do quite often. Roads that lead off it - Mayfield and Hayfield, Belle Walk, Green Lane and The Grove - conjure a rustic, even an arcadian, idyll.  And though today this is largely well-heeled commutable Birmingham, it is surprising how quickly one can come across real rus in outer urbe. Only yesterday Sebastian and I (Seb is my travelling companion on these Wake Green perambulations – Pevsner’s favourite word particularly apt: see below) watched from a footbridge as SUVs and Ford Fiestas on the homeward leg of the school run parted the unexpectedly deep waters of a ford crossing the River Cole. The drowned rat-run? I hadn’t expected to see that; not in Birmingham, not in 2016. Then, once we’d left the ford and followed the riverbank a little way, we came across a leat feeding an old millpond; and next to the millpond, a watermill. There has been a mill here for nearly five hundred years, and it is still standing, still working. Which is more than can be said for Moseley Station.

Today Seb and I are walking the whole length (almost) of Wake Green Road. We begin outside the Hungry Hobbit café, well-named because just nearby J.R.R. Tolkien spent the most impressionistic years of his childhood. Here he lived in a small house on the edge of Birmingham and gentility, with Sarehole Mill in front of him and Moseley Bog behind. This was Tolkien’s Middle Earth. Recent critics have stressed that his experiences on the Somme in 1916 were central to the imaginative landscape he created and peopled first in The Hobbit (1937) and then in The Lord of the Rings trilogy (1954-5). This may be so, not least because soldiers in trenches on the western front did spend their time living in holes, just like the hobbits. But it was the curious hidden worlds of Sarehole Mill and Moseley Bog that were Tolkien’s secret domain. He himself recalled it as

a kind of lost paradise .... There was an old mill that really did grind corn with two millers, a great big pond with swans on it, a sandpit, a wonderful dell with flowers, a few old-fashioned village houses and, further away, a stream with another mill. I always knew it would go – and it did.

Sarehole Mill became Sandyman’s Mill in Tolkien’s fictional Hobbiton. Here was a world in which he became so immersed that he described himself as ‘a hobbit in all but size; liked gardens, trees and unmechanised farmland; smoked a pipe and liked good plain food!’ There has been much discussion of the origins of the word ‘hobbit’. Tolkien claimed that he simply made it up; but can I be the only person to wonder whether, writing in the 1930s, he knew that some of the houses being built in and around Wake Green Road were designed by a Birmingham architect, Holland Hobbis? Just coincidence, you’d say?

Many of the houses hereabouts are textbook suburban mock-Tudor, and Tolkien’s own home was a then-newly-built half-timbered cottage. When Louis MacNeice was a young Classics lecturer at Birmingham University, he wrote with some asperity about ‘half-timbered houses with lips pressed / So tightly and eyes staring at the traffic.’ With condescension characteristic of the 1930s poets, he added:

In these houses men as in a dream pursue the Platonic forms
With wireless and cairn terriers and gadgets approximating to the fickle norms
And endeavour to find God and score one over the neighbour
By climbing tentatively upward on jerry-built beauty and sweated labour. (‘Birmingham’, 1933)

To the wireless and cairn terriers, add privet hedges and monkey-puzzle trees: Wake Green Road has plenty of these relics of respectability. Seb and I meet a gardener, feeding the roots of her hedge with leaf mould. ‘I’m doing the Council out of their £35,’ she tells us cheerfully. (£35 is what Birmingham City Council charges to empty your brown garden bins). The hedge is tall and dense enough to hide completely what lies behind, so the gardener invites us into her garden, where the first surprise is that the original house has entirely disappeared – to be replaced by a block of 1960s maisonettes. But the garden itself is wonderfully preserved. Even its spinney has survived: a miniature secret wood with a winding path through it. Seb wants to explore. Behind the new building, the lawn of the old house has survived, large enough for a good game of cricket; there’s a fine cedar tree too. 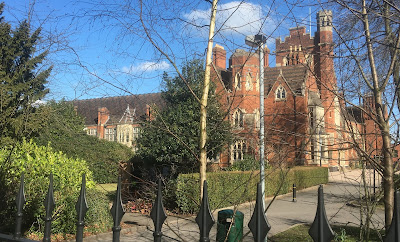 Cricket is still popular along Wake Green Road. Opposite the rather dramatic Victorian buildings of Moseley School, the Pickwick Cricket Club has its playing field. Passing it on dark January afternoons I used to get the impression of hardy fieldsmen braving the cold and encircling a batsman to stop him lofting a ball over the boundary and into Moseley Bog. What I actually saw were flapping white plastic sacks, tied to the stakes that roped off the cricket square. They’ll be gone soon: the groundsman has already been out giving the wicket its first trim. I look forward to watching cricket there with Seb, and I’d like to think the players (true to the traditions of the original Pickwick Club) will be sporting bright blue blazers with embossed brass buttons. But I’m not sure cricketers wear blazers any longer.

Now well on our way, between Billesley Lane and Cotton Lane we pass a row of six houses which are a joy: I never tire of looking at them. The first is being restored, and it’s a beauty of Birmingham Edwardian – as are four of the other five. There’s a hint of Charles Rennie Mackintosh in each of them, and an Arts and Crafts dash of Mackay Baillie Scott; these houses might be at home in the quieter reaches of Port Sunlight or Letchworth; Garden City architecture, in fact. The sixth is equally interesting, but quite different. It belongs more to Norfolk – Blakeney rather than Bourneville – with its Dutch gable, discreet tile-and-flint decoration, its muted redbrick rather than the white pebbledash of its next-door neighbours. The Edwardians who built their homes here knew good architecture and good architects when they saw them.

And now our journey nears its end. As we get closer to Moseley itself, the houses are grander, with turrets and lanterns, weather vanes and ex-stables with lofts above. Louis MacNeice* was wrong about one thing: the houses he’d have seen along Wake Green Road were certainly not jerry-built. Their walls show no inclination to come tumbling down.

At last we reach our destination, Banana Moon, the excellent Nursery where I have to deliver Seb. He trots in happily, glad to be here and out of his buggy, ready for an afternoon with his friends. Grandad is dismissed, and my walk along the Wake Green Road is over.

*I don’t want to give the wrong impression about my feelings for MacNeice, though I appear to have spoken rather dismissively about him here. He is actually a poet whose writing I generally admire very much.
[illustrations: (i) Wake Green Road street sign – a characteristic late 19th century Birmingham design (ii) Moseley School

Text and photographs © the author

Click here for a complete inventory of the first 100 posts to my blog.
Posted by Adrian Barlow at 15:49