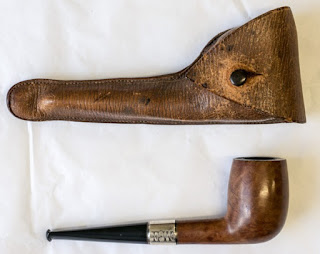 To The Wilson, Cheltenham’s Art Gallery and Museum, to celebrate the acquisition of a fairly ordinary-looking smoker’s pipe.  And rightly so, for this pipe belonged to one of the town’s most distinguished sons: the Polar explorer, doctor, artist and naturalist, Edward Adrian Wilson (1872-1912). More than this, research into the pipe’s history has shed light not just on the complex character of Wilson himself but also on the importance of pipe smoking to those who chose to boldly go where no man had gone before in the early years of the twentieth century.

Made of polished rose briar, the pipe is of the ‘Billiard’ style. A silver band protecting the joint where shank meets stem is idiosyncratically engraved with Wilson’s monogram EW (See illustration below). The letters GBD, stamped both on the wooden shank and on the silver band, identify the pipe’s maker as the Paris-based firm Ganneval, Bondier and Donninger. The band, however, is stamped with London hallmarks, dating it to 1900. The initials AO, also stamped onto the silver band, identify A. Oppenheimer & Co. as the London distributor of the pipe.

It’s more than thirty five years since last I smoked a pipe myself. Like me, Wilson had taken it up at university: an 1893 Cambridge photo shows him smiling, boatered and bow-tied, with pipe in mouth. Certainly he smoked one for most of the 1890s and not even TB, severe enough to force him to go to Davos for treatment, put him off for long. He hated the forced inactivity of the regime his Swiss doctors imposed, and was jubilant when eventually allowed to take up his pipe again. ‘SMOKED ALL DAY!’ he recorded in his diary.

Many pipemen, I suppose, have a love-hate relationship with their pipes, and this was certainly true of Wilson. He was a man of extraordinary gifts and interesting contradictions. He used to give up smoking for Lent and would go up into the woods above Cheltenham, to throw his pipe away in a gesture of finality. But when Lent was over, back he’d go to retrieve the pipe and start smoking once again. Not so surprising, perhaps: pipe smokers hate to be separated from their pipes and will go to great lengths to be reunited with them. Robert Graves, in Goodbye to All That, has a story about the Everest mountaineer George Mallory, who

once did an inexplicable climb on Snowdon.  He had left his pipe on a ledge, half-way down one of Lliwedd precipices, and scrambled back by a short cut to retrieve it, then up again by the same route. No one saw what route he took, but when they came to examine it the next day for the official record, they found an overhang nearly all the way. By a rule of the Climbers’ Club climbs are never named in honour of their inventors, but only describe natural features. An exception was made here. The climb was recorded as follows: “Mallory’s Pipe. A variation on Route 2; see adjoining map. This climb is totally impossible. It has been performed once, in failing light, by Mr G.H.L. Mallory.”

There are plenty of photographs of pipe-smoking explorers and mountaineers seen with pipe in hand or clamped between teeth. Look at any photo of Capt. Scott smoking: you’ll probably see he has an identical-looking pipe to the one that now belongs to The Wilson. Just how much his pipe mattered to him, Scott himself explained in the South Polar Times, May 1902:

The day’s work is nearly over; but a solitary joy remains; throughout your recent adventures you have always kept your mind’s eye on the pipe, tobacco and matches that are distributed about your person [….] The solace of that pipe […] is a thing that only the true smoker can appreciate.

George Seaver, Wilson’s first biographer, claims Wilson didn’t smoke while on Discovery, and Scott himself referred to him as ‘a non-smoker’. Not smoking during the expedition (especially if he travelled with today’s pipe, probably presented to him on departure) would have been a severe test of his resolve, for other members of the team all puffed away with gusto. No wonder Discovery had to set sail with 1,300lbs. of tobacco on board: smoking mitigated the extreme cold and dulled the appetite.  Wilson did, however, return to his pipe once back in Britain. Some of his time after 1904 was spent in the Scottish Highlands researching the causes of disease in grouse. He reported that rubbing his socks with pipe tar helped keep the mosquitoes away from his ankles; no doubt wreathing himself in tobacco smoke offered further defence.

I suspect it was this presentation pipe that he smoked in Scotland. Although it comes in a well-worn and much-used leather carrying pouch, the pipe itself has has not been heavily smoked: there is only one tooth mark on the stem. There is, however, some slight pitting on the edge of the bowl. This suggests to me that Wilson was accustomed to knock out his pipe on a convenient stone or rock in order to dislodge the dottle. Seaver claims that by 1908 Wilson had lost all taste for a pipe, and never hankered after it again. Certainly this pipe wasn’t one retrieved from the Antarctic after Wilson’s death: it surfaced in an auction of contents from Hooton Pagnell Hall, where his brother Bernard (who managed this Yorkshire estate) had accumulated a personal collection of memorabilia associated with Edward. One can surmise that the pipe came to Bernard from Oriana, Edward’s widow; after his death, she distributed mementoes of her late husband to the family. 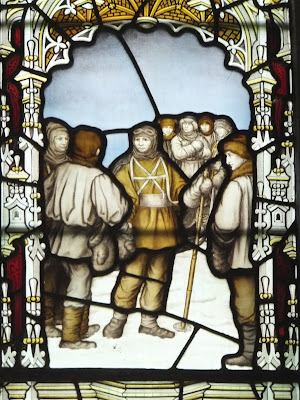 I have some fellow-feeling for a man who gives up his pipe altogether; I also have a sneaking admiration for those who carry on, often in the face of opposition from family and friends. Scott of the Antarctic never gave up – until forced to do so in those latter days, when tobacco as well as food had run out in the hut where he finally died, his arms cradling Wilson.  I know of few more touching letters than the last one Scott received from his wife, Kathleen, before his death:

'How can I guess how things will be with you when you get this… But oh dearie I am full of hope. My brave man will win – with his own right hand and with his mighty arm hath he gathered himself the victory. Now don’t forget to brush your hair – and don’t smoke so much and altogether you’re a ducky darling and hurray for you!'

[Illustrations: (i, ii and iii) Edward Wilson’s pipe, now in The Wilson, Cheltenham Museum and Art Gallery, reproduced by permission of The Cheltenham Trust and Cheltenham Borough Council; (iv) detail from the west window of Binton Parish Church, near Stratford-upon-Avon, depicting Captain Robert Falcon Scott and colleagues about to set off the for South Pole (Wilson on right of image). The window was designed by John Lisle and made by C.E. Kempe and Co., 1915

My thanks to Ann-Rachael Harwood, Curator of Human History at The Wilson, and to Gill Poulter, Heritage and Exhibitions Director, Dundee Heritage Trust, for their help with this article.

Text and photograph iv © the author.