King’s Cross in all its glory 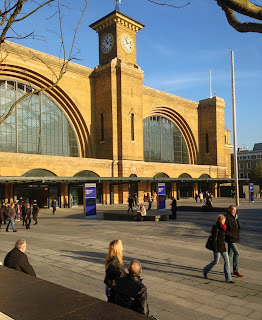 Leaving Cambridge one morning this week, I head for London. I have just come from a meeting about a report I’ve been commissioned to write. It’s an important commission (for me), but the project has run into difficulties: permissions, citations, non-public domains: these words rattle around my brain, and I’m no longer sure I can write the report in the way I think it needs to be written. I must wait for the outcome of other meetings, further decisions taken and revisions demanded, before I can get on with the job.

The train makes its familiar way through stations where it doesn’t stop – Royston, Letchworth, Hitchin, Stevenage: all of them truly ‘destinations not of the heart’. Fog hangs over the passing fields like the fog enveloping my report, and by the time we are nearing the terminus, even Arsenal’s Emirates Stadium has all but disappeared. With a couple of minutes to go we enter the tunnels on the approach to King’s Cross, much to the irritation of those travellers who’ve been on their phones all journey: ‘Hello?.... Still there?.... Can you hear me?.... Hello?.... Damn!’ But then, astonishingly, we emerge into bright sunlight and when we debouche onto the only station in the world to boast both a Platform 0 and a Platform 9¾, I can see blue sky through the glass roof.

In sixty years of arriving at King’s Cross I have never seen this before - the roof having recently been reglazed as part of the station’s restoration and redevelopment. Nor have I ever walked outside before and seen the view that has now been opened up. In December sunlight the huge double-arched frontage of the station is spectacular, every detail sharp and visible. Even the cleaned yellow gault-clay brickwork lifts the spirits. Let Network Rail be congratulated, for once! This whole area used to be a dire mess, somewhere to be hurried though; now people stroll and even sit in the sun to enjoy the exhilaration of great architecture. Brunel himself would have raised his high hat to acknowledge what architects and clients, contractors and Camden Council have achieved here. My one regret is the new glass and steel awning that runs the whole width of the façade, destroying the rhythm of the lower arcade; but no doubt one day I’ll be glad of its shelter.

Great Northern Hotel. Every time I’m here I admire again the modest but magnificent plaque commemorating the opening of the concourse. Most people, I suppose, simply miss it. But everyone should see this, for the lettering is beautiful, and the stone stele on which it is incised has its own story to tell.

Look closely and you’ll see that the text (itself hardly inspiring, I admit) is inscribed with letters of different sizes, phrase by phrase. Each letter has just the hint of a serif, and I love the way the letter ‘O’ – which appears twelve times if you count the nought of 2012 – always swells a fraction more on the right side than on the left. How neatly too the calligrapher has solved the problem of space by enfolding the letter O within the letter C, H within C, and E within L, even - so discreetly I have only just noticed this myself – by eliding the N and the E of ‘opened’! Rarely, if ever, can an erstwhile Transport Secretary (she’s since moved on to International Development) have been so beautifully marmorialised as Justine Greening is here. Some half-remembered lines from Chaucer’s Franklin’s Tale chase away the last traces of my morning’s mental fog:

By process, as ye knowen everichoon,
Men may so longe graven in a stoon
Til some figure therinne emprented be.

Precisely. Carving this inscription must have been agonizingly slow work, one slip of the chisel sufficient at any moment to ruin it all. I like the way the text is all justified to the right, emphasizing the straight edge on that side of the stone, in contrast with the ragged edge on the left. But, if one looks more closely, the straight edge is not perfectly straight: the lower half is slightly concave. That’s because this slab was originally a tread on the staircase leading to the Great Northern offices, and over more than 150 years the step had been worn away by generations of railway clerks, dutifully keeping to the left as they headed up the staircase to their desks each morning. A hidden notice on the left- hand edge (you have to flatten yourself against the wall to read it) tells you this step also serves as a memorial to all these unremembered men.

You can imagine Betjeman on TV, talking about the newly restored King’s Cross and revelling in this tiny fact. I think he would have revelled too in the sight greeting him a little further to the left. For here is the sign for Platform 9¾, below which half a station trolley bearing a gilded birdcage is disappearing into the wall. And that’s not all. A giggle of young persons is queuing to be photographed: one by one they pose ecstatically, hanging onto the handle of the trolley and poised to dematerialise through the wall. A woman from the strategically adjacent Harry Potter Store supplies a Hogwarts scarf to complete the illusion. Into this store I venture nervously, amazed to see children buying Hogwarts kit (scarves, sweaters and ties) with an enthusiasm I never managed to muster when, as a pimply thirteen year old, I was marched into Gorringes to be fitted for my own school uniform.

I can’t afford the Harry Potter wands on sale, though I’d hoped a swish of a magic wand might get my report-writing back on track. But one thing I’m glad to have discovered in the shop is the Hogwarts School motto:

Now, with due deference to Justine Greening, wouldn’t that have been a text worthy the unknown stone carver’s art?

My previous blog about the new concourse is King’s Cross and E.M. Forster. I recommend Philip Wilkinson’s excellent  ‘English Buildings’ blog, and his November 2013 piece about the newly opened space in front of King’s Cross.
Posted by Adrian Barlow at 08:18