From Prague: appointments to keep in the past 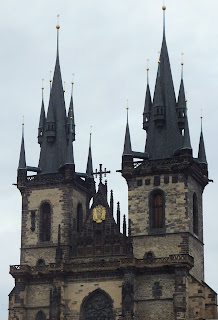 On 21st August 1968, forty-five years ago today, Russian tanks rolling into Wenceslas Square signalled an abrupt end to the Prague Spring, that brave attempt to liberalize communism in Czechoslovakia. I recall the day vividly: the newsreel footage of people staring in dismay and disbelief at the tanks as they lumbered up the Square towards the National Museum; on the front page of the evening papers the face of the Czech leader, Alexander Dubcek, who had been seized by the Soviets. Thanks to the immediacy of TV news, it was no longer possible to shrug this off as merely a local difficulty in “a far-away country between people of whom we know nothing”. The world had come a long way in the thirty years since Chamberlain’s infamous dismissal of Czechoslovakia and the Czechs.

More than twenty years after the fall of the Berlin Wall I still have a curiosity about the former Iron Curtain countries, and two days ago I was myself in Wenceslas Square. If I list the shops and coffee houses to be found there – M&S occupying an impressive Jugendstil building, Debenhams, Costa, Starbucks – the evidence of a post-communist world seems irrefutable. What strikes me is how the memory of the Cold War and its meaning for the people who lived in Czechoslovakia, Hungary and all points east and north seems to have faded – as it certainly has in the west.  The only clear evidence I saw all week of an affection for the past was a breezy blue Lada heading out of the city with a sign on its rear window:  ‘Made forty years ago in the Soviet Union’.

There’s nothing new about this, of course. Indeed, only a few months after the Russian army ousted Dubcek, a young Prague student set himself on fire in front of the National Museum and became the first martyr of the Prague Spring. His name was, of course, Jan Palach. Today a cross on the ground  marks the spot, literally, where his act of self-immolation took place.

Palach didn’t die immediately.  In the hospital where he was treated, Jaroslava Moserova talked to him about his motives:

‘The reason why he did it was quite clear. It was not so much in opposition to the Soviet occupation, but the demoralization which was setting in, that people were not only giving up, but giving in. And he wanted to stop that demoralization.’

You could say Palach succeeded. Czechoslovakia became the focus of the West’s attention. Vaclav Havel, the imprisoned dissident playwright, became second only to Alexander Solzhenitzyn as the most prominent literary opponent of communism. Tom Stoppard (himself Czech by birth) set two of his most overtly political plays, Professional Foul (1977) and Cahoot’s Macbeth (1978) in Prague. Miroslav Holub, the Czech poet, was called by Ted Hughes ‘One of the half-dozen most important poets writing anywhere’. His books were banned after the invasion, he lost his job as a scientist at the university and he was forced to make a public self-denunciation of his own writing. 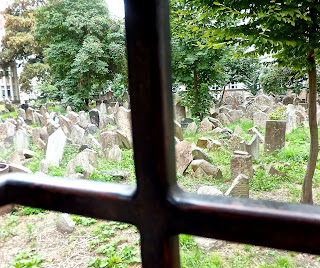 From Wenceslas Square I make my way to the crowded Old Town Square, with its famous clock, and thence to the much quieter Zidovské Mesto, the former Jewish Ghetto of Prague, passing the Old-New Synagogue in search of the Old Jewish Cemetery. I feel uneasy about Holocaust tourism: I have no desire to see Auschwitz, though nearly twenty years ago I visited Sachsenhausen, the huge death camp located on the north-eastern edge of Berlin, with its main entrance at the end of a suburban street. I was apparently the only visitor that afternoon, and the sheer emptiness of the place was overwhelming. By contrast, the Old Jewish Cemetery is unbelievably crowded: it was for centuries the only place where the Jews of Prague could bury their dead and, the guide books say, they were buried there up to twelve deep. Glimpsed today through a small grille in a locked gate, the overgrown jumble of gravestones – truly, a heap of broken images – offer their own troubling testimony. I ask myself why I have so wanted to visit this place, and I think the answer (or a part of it) is because it’s nearly thirty years since I first started to read and to lecture on Primo Levi, whose books – The Drowned and the Saved especially – made me ask myself questions about literature and history I am still struggling to answer.

Another part of the answer is to be found in W G Sebald’s Austerlitz:

And might it not be, continued Austerlitz, that we also have appointments to keep in the past, in what has gone before and is for the most part extinguished, and must go there in search of places and people who have some connection with us on the far side of time, so to speak? (Penguin ed. 2002, trans. Anthea Bell, p.360)

I have written elsewhere about this novel and its importance for me. Austerlitz is a solitary wandering scholar in search of his past and his real identity; he finds it at last in Prague. Here he had been born; from here he had been sent, aged four and travelling alone, on one of the last kindertransport trains to get safely out of Czechoslovakia. If you have never yet read Austerlitz, it’s not too late. Re-reading the book this week, I’m struck by how Sebald’s description of the occupation of Prague by Nazi forces in the Second World War anticipates the occupation of the city by Soviet troops in 1968 – and not just his account of the tanks rolling across the Vltava river but of their effect on the inhabitants of the city:

Next morning, at first light, the Germans did indeed march into Prague in the middle of a heavy snowstorm which seemed to make them appear out of nowhere. When they crossed the bridge and their armoured cars were rolling up the Narodní a profound silence fell over the whole city. People turned away, and from that moment they walked more slowly, like somnambulists, as if they no longer knew where they were going. (p.242)

Just beyond the walls of the Old Jewish Cemetery, I come by chance on a memorial to Jan Palach: a small face on a large bronze oblong. Only his name and the date of his protest are given – nothing else is needed. At the top of the plaque is engraved the lion rampant, symbol of Czech national identity.  Palach’s love for his country is matched by his country’s admiration for him. The same can be said about the great Czech composer Dvorak. Sure enough, just across the road, outside the Rudolfinum Concert Hall, is a statue of my favourite composer.

To Dvorak I owe the strongest of all my memories of 21st August 1968. By an ironic coincidence, the Promenade Concert in the Albert Hall that evening featured Mstislav Rostropovitch, the great Russian cellist, performing Dvorak’s Cello Concerto. I had gone to hear what is perhaps the finest of all Czech symphonic works, and I’d queued outside the Albert Hall, reading in the Evening Standard the first accounts of events in Wenceslas Square. Once inside, I stood as close to the orchestra as I could get, feeling myself to be a proper Promenader at last. When Rostropovitch appeared, there was booing and barracking from some in the audience; he looked shocked and disconcerted as he settled himself to begin. And then, while he played, tears streamed down his face. I saw them: I was there.

[Illustrations:  (i) The spires of the Our Lady Before Tyn, Old Square, Prague; (ii) The Old Jewish Cemetery; (iii) memorial to Jan Palach.
Posted by Adrian Barlow at 10:10