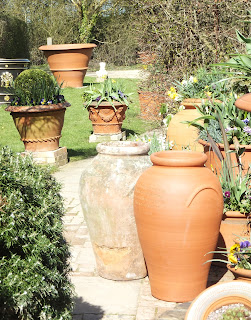 High summer in early Spring: on a day that will set records for March, we drive across the Cotswolds in search of Whichford Pottery. We have come to inspect an urn that has been commissioned to stand in a corner of the gardens at Madingley Hall, where I used to work. The new urn will replace one that had stood in this same corner ever since the Topiary Garden, at the western end of the north terrace, was laid out around the time of the First World War. The old urn had succumbed to frost and was in danger of collapsing.

Whichford Pottery is a joy, and so is the new urn. Standing side by side with the old, it has the same dimensions and form but is not simply a copy. Its height (nearly a metre) and girth match the urn it will replace; but whereas the new urn was thrown on a wheel, the old urn was formed by the ancient coil method.  It was made in the pottery of Montelupo near Florence: the name is stamped on that side of the urn which for a century has been hidden by the enveloping hedge.

Adam Keeling, who has made the new urn, tells us how a coil pot was made. Walking backwards (he explains) the potter will have coiled a long rope of clay upwards from the base of the pot, each new loop slightly wider than the one beneath to create the gentle swell of the urn up first to the shoulder and then in towards its neck and throat. Not until the approximate shape was established would the surface of the clay have been smoothed and wrought into its final elegant form. Next the old urn would have stood in the Tuscan sun and only when, finally, the clay was dry would it have gone into the kiln.

Now, under the Cotswold sun and with two pairs of great buzzards coiling overhead, the new urn glows. It turns heads: visitors to the Pottery pause and admire its rich terracotta (‘cooked earth’, of course). They are struck by how beautifully it has been made and how well it compares with its predecessor. ‘Stunning’ is the word used by Paula, who has shown us round and introduced us to the potters, and she is right.  Indeed, it more than deserves that celebrated phrase of John Donne’s: truly, it is ‘a well-wrought urn’.

But wait. Is this pot, destined for Madingley Hall, strictly speaking an urn at all?

When Donne wrote ‘The Canonization’ he had a particular kind of urn in mind. The poem starts with the poet telling someone to shut up: ‘For Godsake hold your tongue, and let me love’:

Wee can dye by it, if not live by love,
And if unfit for tombes and hearse
Our legend bee, it will be fit for verse;
And if no peece of Chronicle wee prove,
We’ll build in sonnets pretty rooms;
As well a well wrought urne becomes
The greatest ashes, as halfe-acre tombes,
And by these hymnes, all shall approve
Us canoniz’d for Love ….

It’s a cinerary urn of which Donne speaks, praising the craftsmanship of the anonymous potter who fashioned (‘wrought’) it on the wheel. This is the same kind of urn that prompted Sir Thomas Browne’s meditation on death and memory in Urn Burial (1658):

In a field of Old Walsingham, not many months past, were digged up between forty and fifty urns, deposited in a dry and sandy soil, not a yard deep, nor far from one another — not all strictly of one figure, but most answering these described; some containing two pounds of bones, and teeth, with fresh impressions of their combustion; …. The present urns were not of one capacity, the largest containing above a gallon, some not much above half that measure. (Ch.II)

The Madingley urns are far larger than these. The old one, made by a potter whose half-decipherable name stamped into the clay may have been Vincente, was presumably intended for storage, perhaps of oil: the inner surface retains traces of a shiny black glaze. But it’s not an amphora: it does not have the characteristic pointed base, elongated neck or prominent handles. Indeed, the handles of these storage jars are little more than arched flanges below the shoulders of the pot. They would be useless for lifting one of these when full of grain or wine: the pots are heavy enough when empty. The nearest Latin names for pots of this size and shape would probably have been orca or dollum, but in the end I think it’s best to disregard historical or geographical accuracy and simply call them Ali Baba jars.

Such a label lacks seriousness, I admit. So it’s a relief to find that by the end of the eighteenth century ‘urn’ was being used to describe pots with functions other than to hold ashes:

Now stir the fire, and close the shutters fast,
Let fall the curtains, wheel the sofa round,
And while the bubbling and loud-hissing urn
Throws up a steamy column, and the cups,
That cheer but not inebriate, wait on each,
So let us welcome peaceful evening in.

Thus William Cowper in The Task of 1785, extolling the virtues of the samovar. And a little later, Keats’s Grecian Urn (1819) is simply a decorated pot. It’s probably not long after this that the Madingley urns – four in total, and let’s continue to call them urns; after all, whatever their original functional their standing in the Topiary Garden is decorative and ceremonious rather than practical – were first made in Montelupo. When and how they found their way to Madingley, I have no idea. But I’m pleased to think the Whichford urn will now take its place alongside the other three, especially since Jim Keeling, who founded the Pottery over thirty years ago, incised the urn fittingly with a verse by William Blake. The last word of this poem is ‘sunrise’, and the new urn will stand in the only corner of the Topiary Garden to catch the sun – but only in midsummer, and very early in the morning, as I have seen it do.

My new book, Extramural: Literature and Lifelong Learning, has now been published by Lutterworth Press. For details and first reviews, click here.

For an American account of the launch of Extramural at the UALL Conference at Clare College, Cambridge, last week, click here. This account is written by Dr James Shaeffer, President of UPCEA, who gave the keynote speech at the Conference.
Posted by Adrian Barlow at 13:55