Machiavelli at the Cheltenham Literature Festival 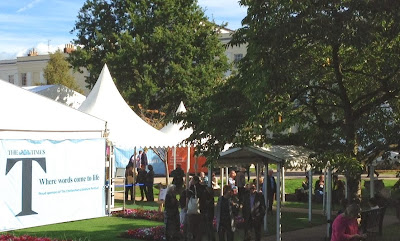 Philip Bobbitt , American presidential adviser, academic and author, describes himself soberly as a constitutional lawyer and historian of diplomacy and strategy. Others show less restraint. The Spectator has recently likened him to Indiana Jones, and the New York Observer has labelled him ‘the James Bond of the Columbia Law School’. More alarming still, a reviewer of Bobbitt’s influential but controversial book on modern states and modern war, The Shield of Achilles (2002), called him ‘Satan’s Theologian’.

He has just given one of the opening lectures at this year’s Cheltenham Literature Festival, and I was asked to introduce him. I thought this might be daunting – after all, Bobbitt was President Clinton’s senior director for Strategic Planning, and he’s a man who numbers both Henry Kissinger and the former Archbishop of Canterbury, Rowan Williams, among his admirers. (Of whom else in the world today could that be said?)  I am happy to report, however, that we got on very well, and even found two things at least in common. First, we discovered we’d once lectured at Madingley Hall, Cambridge, during the same weekend (he on International Relations and I on David Lodge’s fiction).  Second, we were the only two people at the Festival that afternoon wearing ties.

Literature Festivals celebrate the written word through the spoken word. They are also of course a sophisticated form of market place: the speakers nearly always have a book to sell. Philip Bobbitt’s is his new study of one of the world’s great bogeymen: Old Nick personified, Niccoló Machiavelli.

I read this book, The Garments of Court and Palace: Machiavelli and the World That He Made, last

week, and am very glad to have done so. It’s far from simply a revisionist re-reading of The Prince: it’s a clear-eyed, humane attempt to explain why Machiavelli and his book still matter. Reminding us that Machiavelli never wrote ‘the end justifies the means’, Bobbitt argues that

the nature of the state – its commitment to the common, public interest which embraces all classes and groups under law – is what makes the state a worthy recipient of the devotion that Machiavelli felt is its due. Ends matter, and not just any ends will justify any means.

Two things have greatly enriched my reading of The Garments of Court and Palace. First, Philip Bobbitt writes as an historian whose deep understanding of history is tempered by his wide reading of literature. The first hint of this comes in the book’s dedication –

– which of course echoes Eliot’s dedication of The Waste Land to Ezra Pound. Then the first chapter has as its epigraph a snatch of dialogue from Robert Bolt’s play A Man for All Seasons:

Thomas More: Master Rich is newly converted to the doctrines of Machiavelli.
Richard Rich: Oh no.
Duke of Norfolk: Oh, the Italian. Nasty book, from what I hear.
Margaret: Very practical, Your Grace.

Plays in fact appear often in the book. Bobbitt might be expected to cite The Jew of Malta’s Prologue:

To some perhaps my name is odious;
But such as love me, guard me from their tongues,
And let them know that I am Machiavel.

But other plays, too – Pinter’s Betrayal, Stoppard’s Arcadia and Frayn’s Copenhagen – are invoked to illustrate a critic’s point that ‘Machiavelli’s irony does not involve simply saying one thing and meaning its opposite; it more often describes an attitude that embraces two possibilities at the same time.’

This willingness to create a dialogue between Machiavelli’s writing and the writing of later ages is the second thing to appeal to me. Both in The Garments of Court and Palace and in his Festival lecture he has admitted that “my rendering of Machiavelli is an example of what Jorge Luis Borges called a writer’s creating his own precursors”. At Cheltenham he gave, as an example of this, the way TS Eliot ‘created’ a John Donne so particular and so persuasive (and so like Eliot?), that it has become almost impossible to imagine anyone before Old Possum ever imagining Donne differently.

Just as Eliot ‘created’ a new Donne in order to explain and justify his own theories of literature (the dissociation of sensibility, above all), so Philip Bobbitt has created a new Machiavelli to be his own precursor. He calls his book a ‘commentary’ on The Prince and the Discourses, but some critics have suggested that The Garments of Court and Palace equally invokes Machiavelli to act as commentator on Bobbitt’s theories about statecraft and today’s ‘market-state’.

Is this hubris on Bobbitt’s part? I don’t think so. True, he admires the man (whom he calls ‘our sublime predecessor’) but his message – and this book certainly carries a message – is an urgent one: we ignore Machiavelli at our peril. His contemporaries missed his point; we can’t afford to:

In our case it is not the hegemony of foreign states that threatens us – though we are so accustomed to thinking in these terms that we scan the horizon restlessly for potential competitors – but rather internal dissolution and disgust with our own institutions.

If this sounds more like Savonarola than Machiavelli, Bobbitt’s message is nevertheless clear: ‘We cannot be guided by Machiavelli, but we can be alerted by him.’  At the end of the book, in an unexpectedly personal Acknowledgement, he notes that the world into which his son was born last year “is in many ways a far better one than the world into which I was born, and a far less dangerous one than Renaissance Florence”; he concedes, though, that it is “not without formidable challenges”. Not many writers, I imagine, readily go into print to acknowledge a debt to Machiavelli, but Philip Bobbitt does. Describing how he and his young wife “first met in a seminar on The Prince and The Discourses," he concludes The Garments of Court and Palace on a note of touching incredulity:

It now seems that, for all my many debts to Machiavelli , this will prove to be the greatest.

Philip Bobbitt’s book, The Garments of Court and Palace: Machiavelli and the World That He Made, is published by Atlantic Books: ISBN 9781843546849.