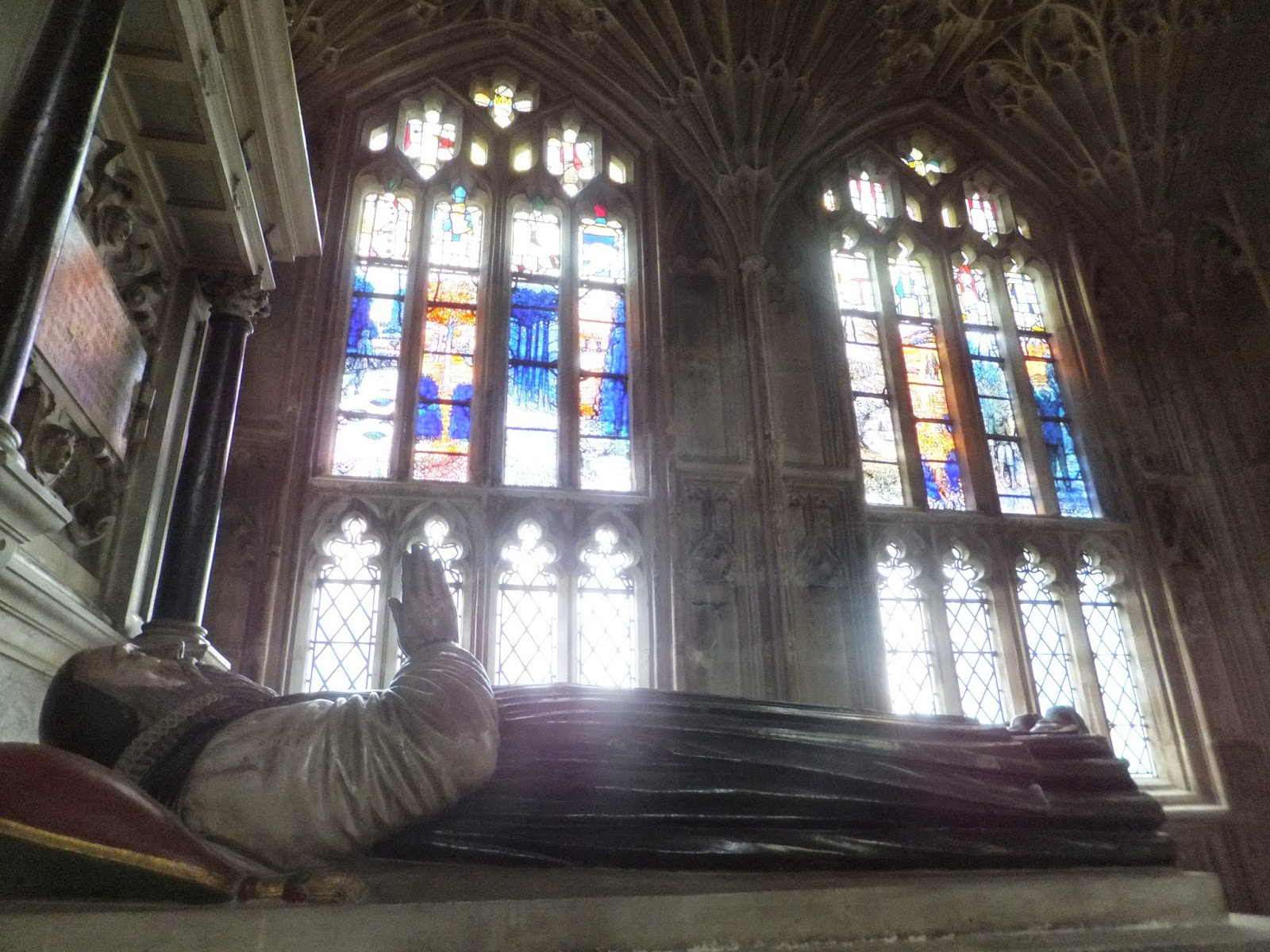 It was Aunt Mary who introduced me to Tom Denny. ‘Here,’ she said, thrusting the Yorkshire Post into my hand almost as soon as we were through her front door, ‘you’re interested in stained glass. What do you think of this new Millennium window in Bolton Percy Church? We could go and have a look at it while you’re up here.’ I took the paper from her, and read the piece. The name Denny meant nothing to me then; fourteen years later, it means a great deal.  I now believe Tom Denny’s stained glass to be the most exciting achievement in recent ecclesiastical art in Britain, and I'll always be grateful to Aunt Mary for alerting me to it.

‘Stained-glass’, Denny has written, ‘is a medium ... where at first one can be strongly aware of colour 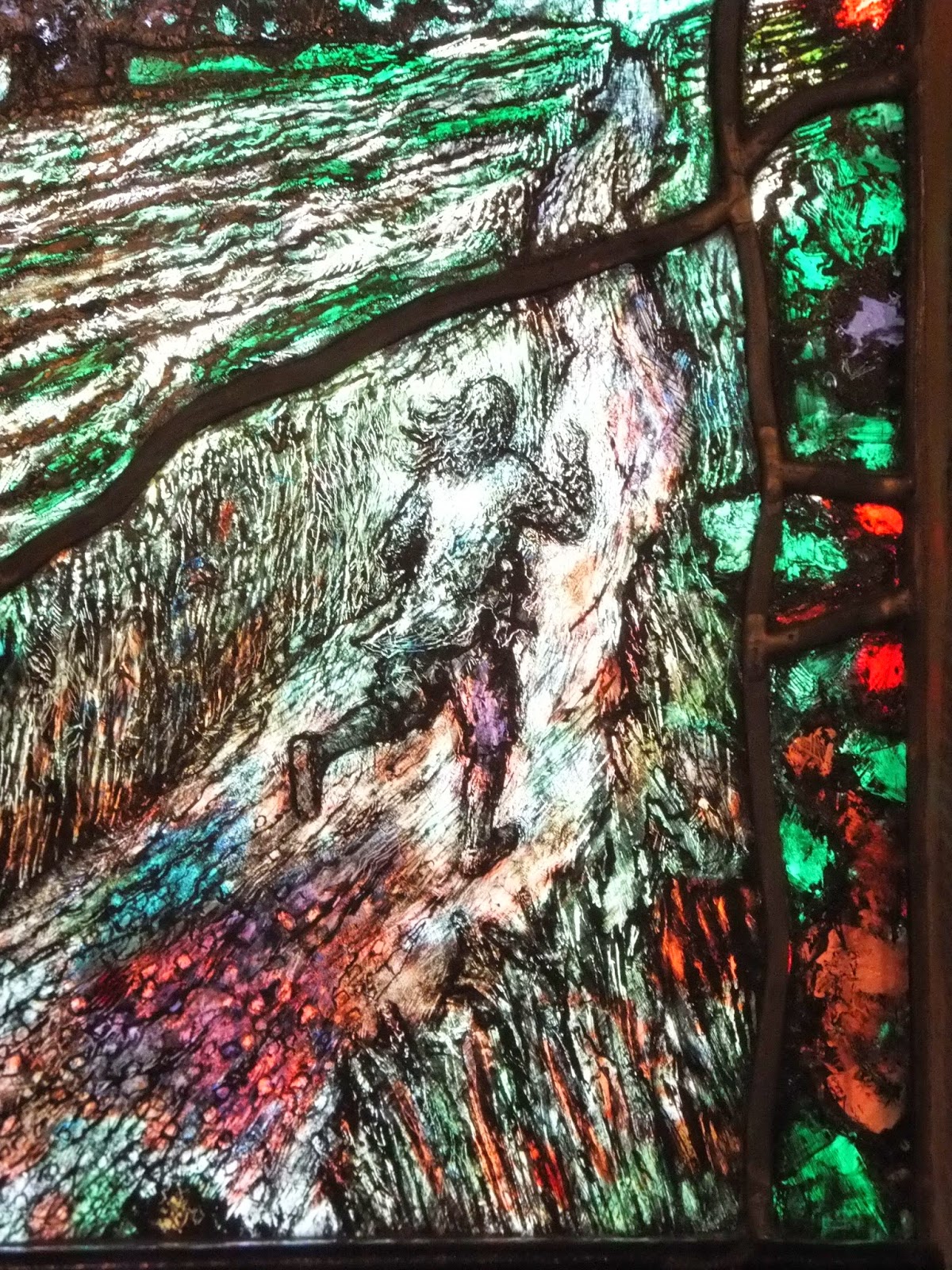 and light as a kind of musical language, a ‘humming’ of colour, a riverine movement of light. And then there is room for the development of whole worlds of narrative and detail.’* Today you can see his work in cathedrals, colleges, abbeys, parish churches and tiny chapels. His largest, perhaps most spectacular window, is in Durham. Often his windows come in pairs, as at Gloucester, Tewkesbury and Malvern. Don’t expect to see saints and biblical scenes in them, though, at least not as such scenes traditionally appear. Denny’s windows mix the abstract with the allegorical, and his figures sometimes seem to be disappearing into a landscape, rather than emerging out of it. 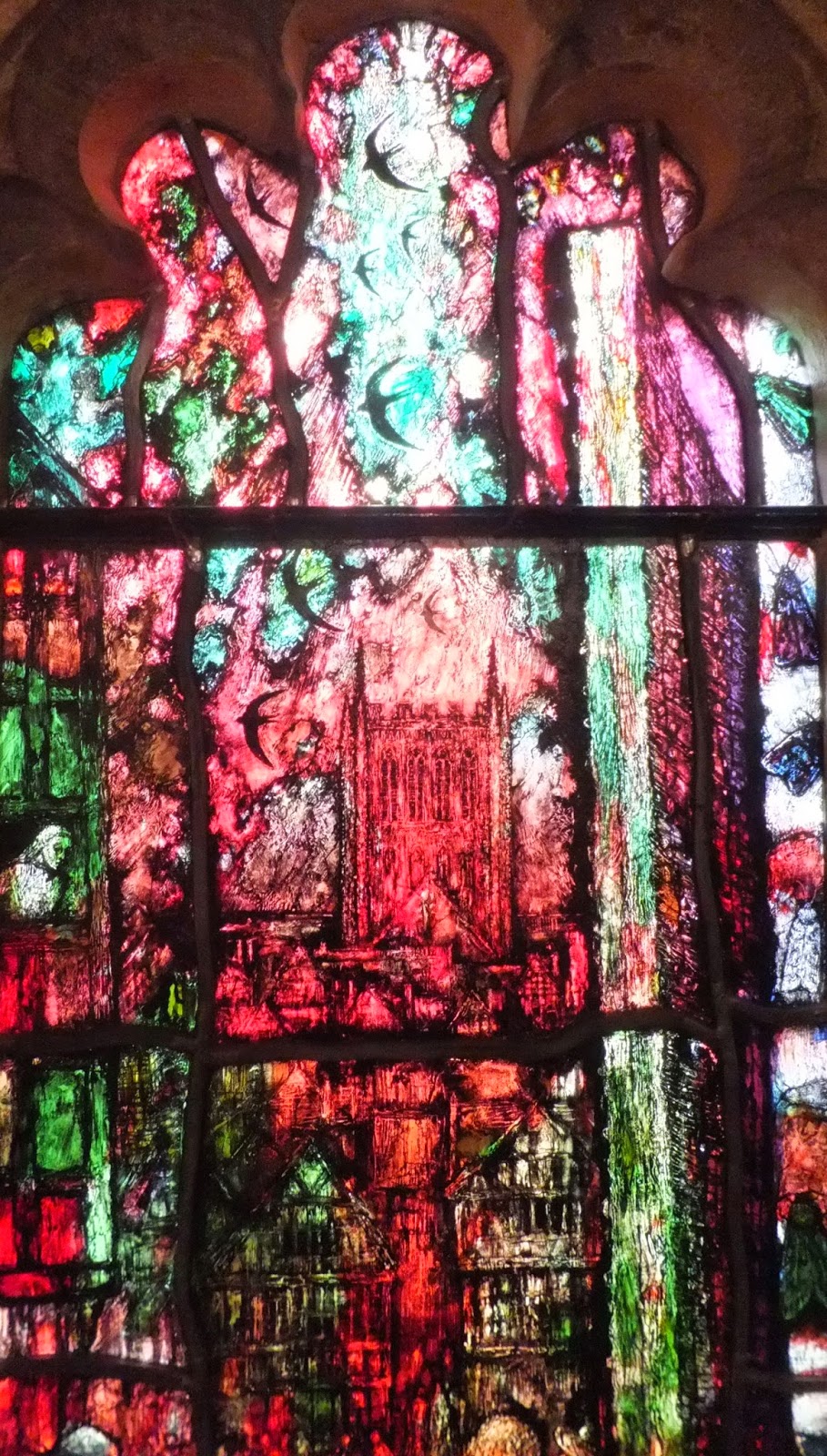 Landscape indeed is one of his hallmarks, and the scale of these vistas may be wide-angle (as at St. Christopher’s Warden Hill) or miniature. Hereford Cathedral has a pair of small two-light windows, in the Audley Chapel, celebrating Thomas Traherne, the 17th century visionary and poet, born in the city. Here Denny’s sense of the importance of place is focused both on the cathedral itself, with swifts wheeling ecstatically around its tower, and on the local countryside through which Traherne walked as an act of joyous communion with the created world. These are windows to be enjoyed up close and at eye level: the patination of the surface, the varying thicknesses of the glass, even the character of the leadwork, invite us to engage with the materiality of stained glass in a way rarely possible elsewhere.

And later this month there is a new Denny window to be dedicated, again in celebration of a local writer – though, as with Traherne, another writer who is by no means to be pigeon-holed by his local identity: Ivor Gurney. Gurney already has one memorial in Gloucester Cathedral, a discreet plaque describing him as ‘composer and poet’ and ‘chorister of this cathedral church’. His new memorial is equally discreet. In a chantry on the north side of Gloucester’s Lady Chapel, Tom Denny has part-filled two Perpendicular windows, each of which has four narrow lights, and each divided by a transom: the upper halves now contain the eight panels making up the whole. In the top section of each are fragments of 14th and 15th century glass, and Denny has designed his own glass to complement these fragments, even using lead-work to signal the continuity between old and new. 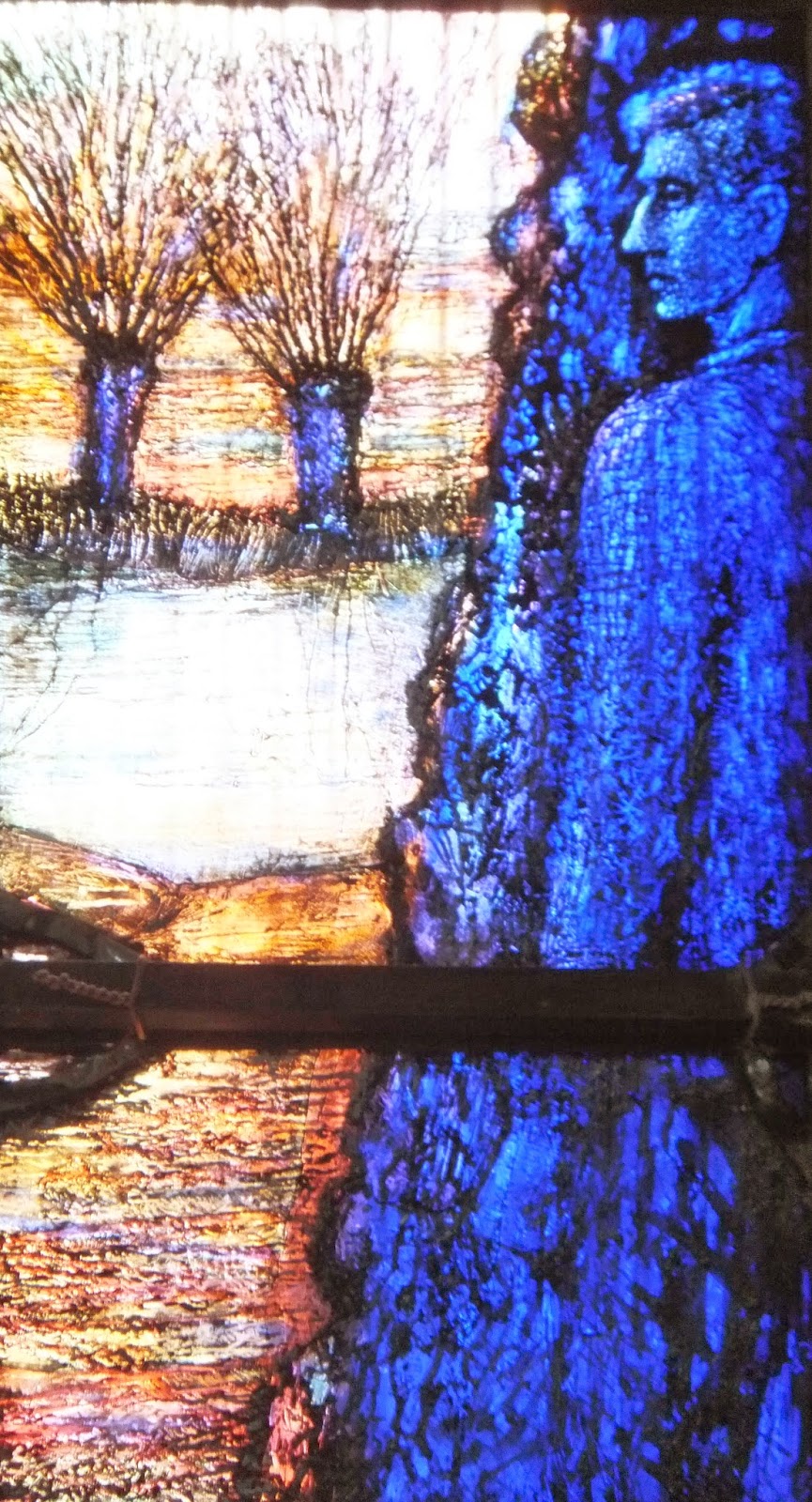 Physically the chapel housing this Gurney memorial is dominated by the C17th effigy of Bishop Godfrey Goldsborough; and, for the time being at least, one has to look at the glass through the mullions of a stone screen separating the chantry from the Lady Chapel. This is not inappropriate. It reminds us that for the last fifteen years of his life Gurney was himself partially hidden from view, housed in a mental hospital far away from the Cotswold countryside he had longed for as a soldier in France, and which he constantly evoked in his music and poetry. The title of his first volume of poetry was Severn and Somme.

What Denny has done is to reflect across the eight panels aspects of Gurney’s life and art. Each panel echoes one or more of Gurney’s poems. In the first light of the left-hand window, for instance, a man walks away from us over a curiously pitted, ancient landscape (there appears to be a Neolithic hand-axe lying on the ground at the foot of scene). He strides towards distant May Hill, ‘that Gloster dwellers / ’Gainst every sunset see’. (I have written about May Hill’s significance before: see In Gloucestershire.) But in the last light of this window, the same man gazes plaintively from behind a hedge at the leafless willows lining the Severn in winter:

And who loves joy as he
That dwells in shadows?
Do not forget me quite,
O Severn meadows.

‘There are strange Hells ….’ It would be impossible for a window memorialising Ivor Gurney not to reflect his life as a soldier, but this Tom Denny does in a wholly unexpected way. In the first panel of the right-hand window, abandoned boots and helmets strew the ground in front of a flooded shell hole. Look carefully and you will see the ghoulish faces of drowned and drowning soldiers in the water. A hand and perhaps other limbs break the surface of this Stygian pool: it is a vision of hell. And then on the crater’s far bank a spectral army stands: Gloucester soldiers with their backs turned away from the nightmare of No Man’s Land – turned away, too, from the Gloucester tailor’s son who had fought alongside them:

There was not one of all that Battalion
Loved his comrades as well as I – but kept shy.
Or said in verse, what his voice would not rehearse.

War memorial windows from the 1920s onwards have occasionally depicted the battlefields of France and Flanders. I have never seen another that represents such a scene of horror and overwhelming loss as Denny has created here. I don’t know which specific poem or poems prompted this landscape of despair, but the lines that come to my mind are from ‘Farewell’, a poem Gurney wrote in 1924 in Dartford asylum and which marks him out as one of the most remarkable of all the war poets: a man who hoped that comradeship and the physical effort of soldiering would save him, and yet who drowned in the end, not in a flooded shell hole but in his own mental distress:

Dear Battalion, the dead of you would not have let
Your comrade be so long—prey for the unquiet
Black evil of the unspoken and concealed pit.

The Ivor Gurney memorial window will be dedicated at Evensong in Gloucester Cathedral on Saturday 30th April.

* Tom Denny, ‘A note on the window’ in Wisdom’s Call: a new stained-glass window at St. Catharine’s College, Cambridge (published by the College, 2012)

[Quotations from poems: the description of May Hill appears in ‘The Fire Kindled’, and ‘Only the wanderer knows’ comes from ‘Song’; both poems first published in Severn and Somme (1917).  ‘There are strange Hells’ are the opening words of the poem ‘Strange Hells’, and the lines addressed to his ‘Dear Battalion’ come from ‘Farewell’. Both poems are quoted here from Oxford University Press’s new anthology, Poetry of the First World War, edited by Tim Kendall .

[illustrations: (i) the newly installed Gurney memorial windows by Tom Denny in the north chantry of Gloucester Cathedral’s Lady Chapel; (ii) and (iii) details from the Traherne windows in Hereford Cathedral: Traherne running, and swifts around the tower ; (iv) and  (v)  details from the Ivor Gurney windows. All photographs (c) Adrian Barlow
Posted by Adrian Barlow at 15:47