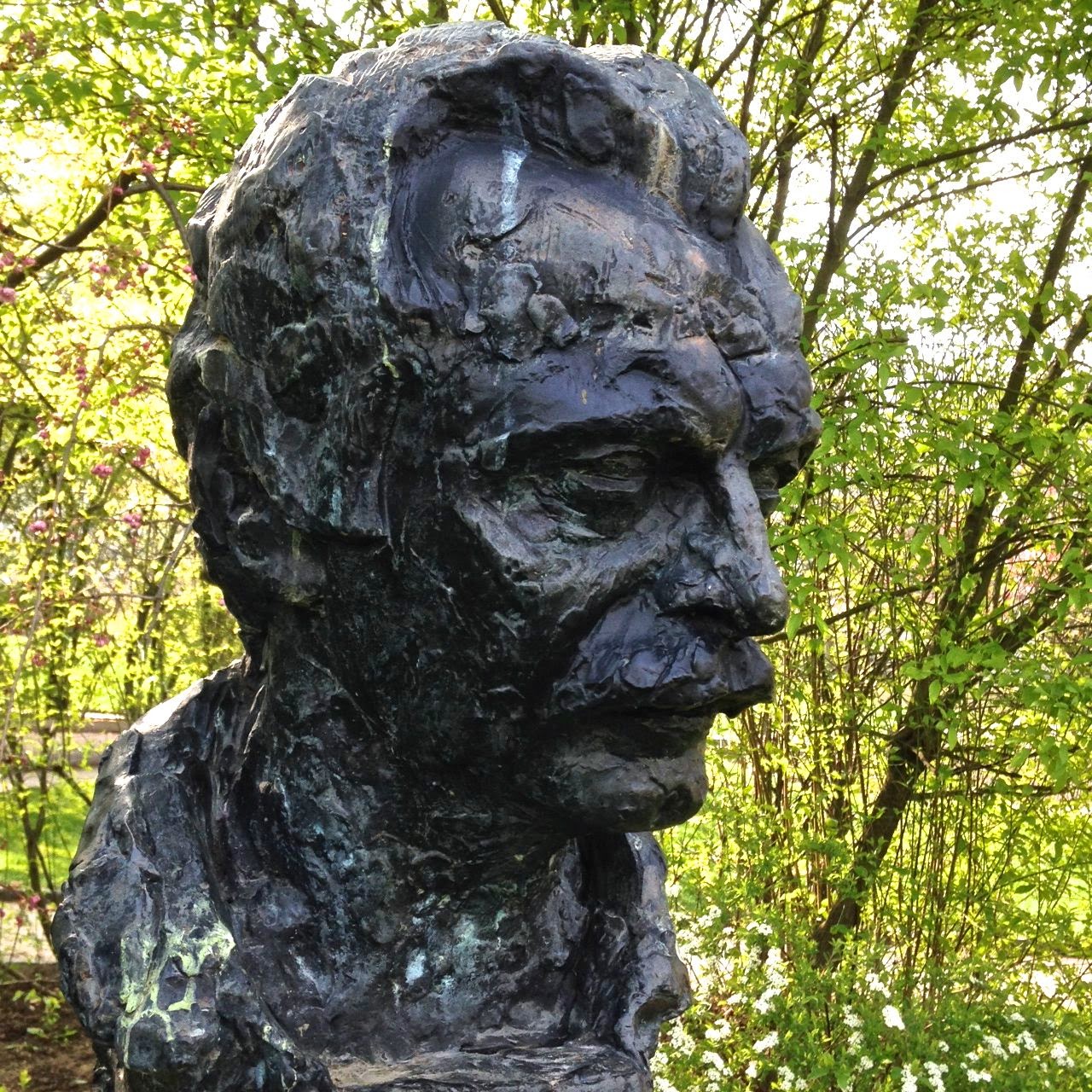 Big heads – that is, bigger than lifesize heads – loom large in childhood. Whether we grew up with Humpty-Dumpty, Mickey Mouse, the Mr Men characters or Peppa Pig, their big heads and small bodies offer the very young an alternative image of the human or anthropomorphic form – and it’s one that has nothing to do with big-headedness. ‘Don’t worry about bodies’, these big heads tell little children, ‘faces say it all.’

Big heads have featured in art, of course, across the ages. I find them sometimes friendly, sometimes disturbing. I suppose the inscrutable Sphinx has one of the most famous outsize faces ever carved, and one would have liked to know what Shelley‘s Ozymandias looked like.  According to the poem, only ‘Two vast and trunkless legs of stone / Stand in the desert’; nevertheless,

Near them on the sand,
Half sunk, a shattered visage lies ...

and although the head is shattered, enough remains for the traveller to discern the ‘frown / And wrinkled lip and sneer of cold command’. Rather like the Cheshire Cat’s grin, the expression – though not the face itself – survives.

In late March this year, in Paris, I sat in a small park named in honour of Georges Brassens, who had lived in nearby Impasse Florimont, originally his hiding place from the Nazis (he had managed to abscond from a forced labour camp). Brassens is revered in France today as one of the best-loved poets and song-writers of the post-war era. Schools, theatres, public spaces, even a metro station are named after him. Hence the parc Georges Brassens in the 15th Arrondissement where, in a quiet corner and silhouetted against the newly-green branches, I discovered a fine sculpture of him– a big bronze head of Brassens.

Although the neck has the hint of a collar, I think one would need more of the shoulders to call this a bust. But it needs no apology for being just a head. It is wonderful: the humane portrait of a man who was a gentle anarchist, a chanteur in the tradition of Charles Trenet, and a wryly affectionate observer of human folly – his own as much as other people’s.  Look at his high receding forehead and that slightly puzzled expression, accentuated by the wrinkle looping upwards from the bridge of his nose; eyes that seem to look inward rather than downward; a moustache, almost (but not quite) comically large, and a firm but unassertive chin. How well the sculptor, André Greck, understood this most interesting and interested of men! Julian Barnes has described Brassens as France’s greatest and wisest singer: ‘We should visit him,’ he says, ‘in whatever way we can.’ I’m glad to have done just that.

Three weeks after my encounter with Georges Brassens, I came face to face with a very different 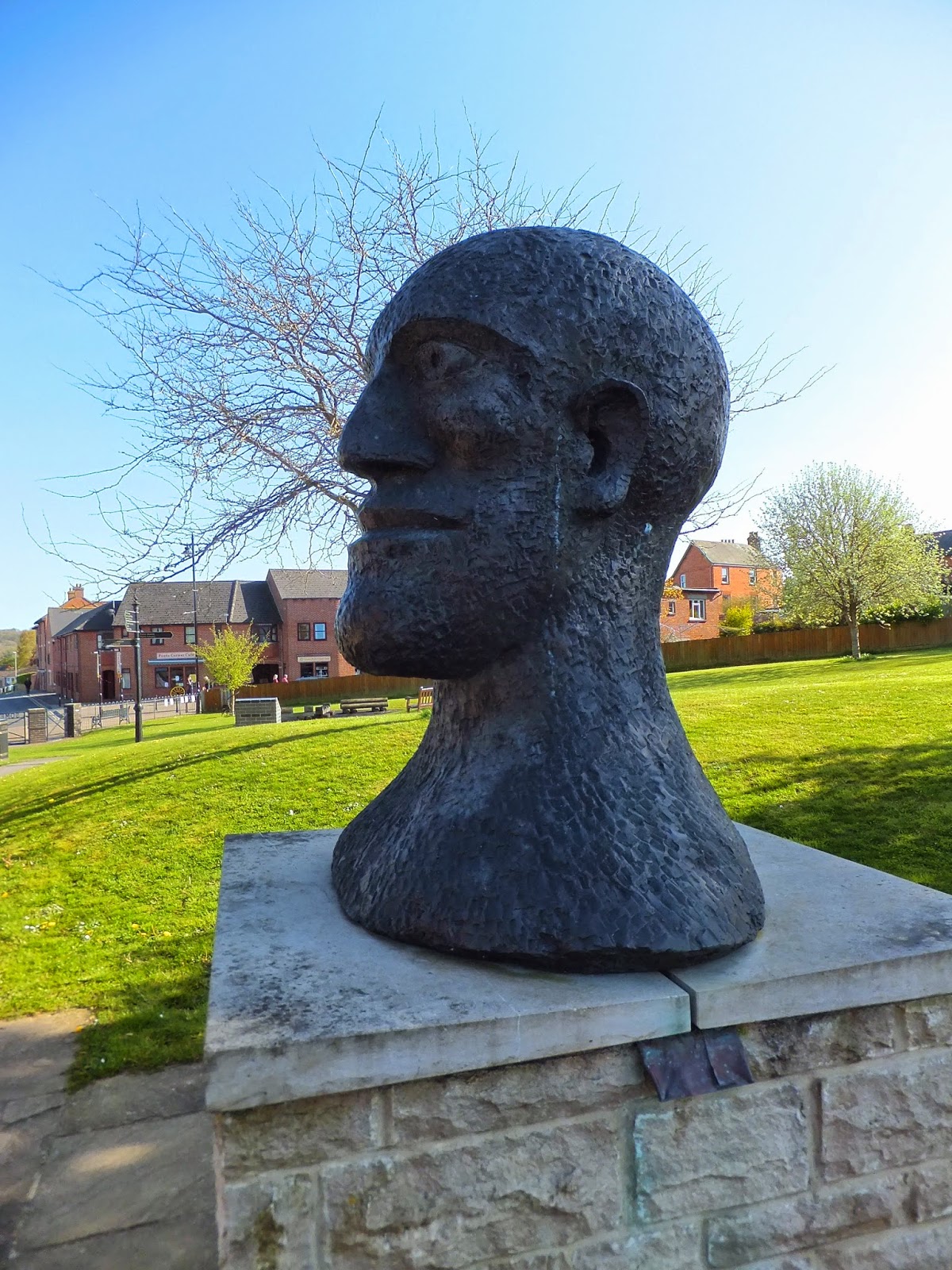 head: this one, by Elizabeth Frink, sits outside the Exchange Arts Centre at Sturminster Newton in Dorset. Frink, who had lived in Dorset for much of her later life, has always been important to me: I count her and Jacob Epstein as the two artists who first introduced me to the possibilities of modern sculpture. In 1962, I gazed and gazed but little thought how much Epstein’s ‘St Michael defeating the Devil’ outside, and Frink’s lectern eagle inside, Basil Spence’s newly consecrated Coventry cathedral would still mean to me more than fifty years later. That they meant something to me even then I am certain: before visiting the Cathedral, I had already spent hours trying to draw these sculptures from photographs in the then just-launched Sunday Times Colour Supplement.

Frink’s Sturminster sculpture is entitled ‘Desert Head IV’. It was given to the town in 2008. In every respect it is the antithesis of the Brassens head - except that it, too, compels our gaze. The shoulders, the neck, the chin, the mouth, nose, ear and eye: all assert their right to be taken seriously. But whereas the head of Brassens is crowned by a wave of hair sweeping back from the temples, Frink’s is without hair: this head allows nothing to distract us from its monumentality. It leads with its chin; its expression is unnerving . Whereas Brassens looks inward, this Desert Head stares – almost glares – out into the distance. The eyebrow like an escarpment separating the cranium from the cheek, the slightly aquiline nose, the mouth that seems to wrap itself around from one side of the head to the other – these features together assemble a face that might have been painted by Picasso. Indeed, if you ignore the lantern jaw, this head could almost be Picasso’s own. 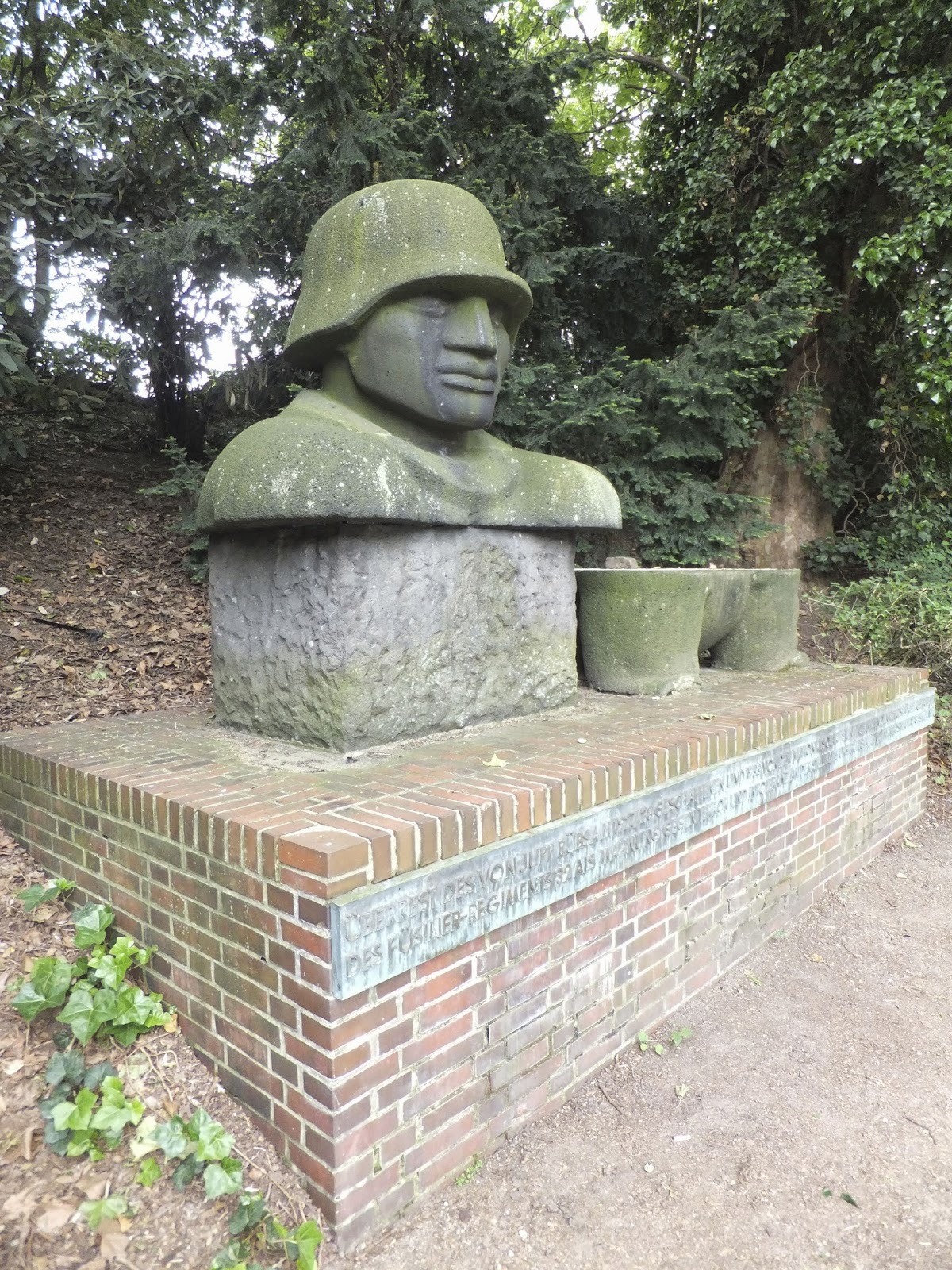 Then in Dusseldorf last month I came across an even bigger, more unsettling head, one belonging to a war memorial by the German artist Jupp Rübsam (1898-1978). This memorial, to the members of the 39th Fusilier Regiment, was erected in 1928 but stood for only five years before being dismantled and effectively demolished by the nascent National Socialists, who then built one of their own. Even in its original form, it must have been a disturbing presence: the helmeted head is huge, and thick-lipped. Unnervingly un-Aryan to the Nazis, perhaps. And now? Well the expression is hard to read: from beneath the rim of the helmet, the soldier’s eyes stare out, giving nothing away. This isn’t so much a shattered, as a frozen, image.

Yet shattered the sculpture most certainly was. And now only two bits of it remain – if one may call this huge bust a ‘bit’. The head and shoulders rest on a concrete block which itself stands on an oblong brick plinth. Placed beside the head is a rescued section of what was once presumably a body: But whose body, and which section? Were you to imagine the soldier’s huge head on top of what looks like a section of rump and thigh, you’d have another (and thoroughly bizarre) kind of sphinx. It makes no sense, but this is perhaps its point. This big head was retrieved and re-erected in its present location in 1978 as a memorial ‘Gegen Terror und Intoleranz’.  Upon which subject, in its present disembodied form, it speaks eloquently – though its lips never move.