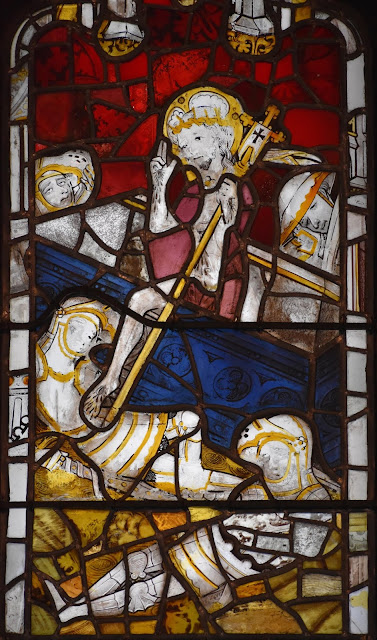 These days most people, if they associate Coventry with stained glass at all, think of John Piper’s great Baptistry window. And rightly, for it was the first, and I believe remains the finest, modern abstract window in any British cathedral.

But the city has a distinguished tradition of stained glass, going back to the 15th century, when John Thornton was the pre-eminent English stained glass artist. He and his workshop created the enormous East window of York Minster, while at the same time continuing to fill the churches of Coventry with stained glass promoting the city as a place of culture, wealth and civic pride. Much of this celebrated glass adorned St Michael’s Church, the former Cathedral, until hurriedly taken out and stored as loose fragments in 1939 when war loomed. Unlike the Cathedral itself, most survived the war, but only recently has the scale and importance of this forgotten treasure begun to be appreciated again.

Some of the glass has already been restored and a small amount is on display in the present Cathedral. Among the pieces, I was especially struck by a small panel depicting the moment of Christ’s Resurrection (fig.i). It’s worth a close look, even though I suspect this was not the work of John Thornton himself, nor even perhaps of his workshop: it lacks the assurance of his style, but is not without a rough vigour of its own. The window depicts the moment of the Resurrection – literally Christ’s emergence from the grave. The scene is loosely extrapolated from the account in Matthew’s gospel, where the soldiers, set by Pilate to guard the tomb, are paid hush money to say that someone had broken into the tomb and stolen the body while they were asleep.

In this window, as usual in medieval stained glass, the tomb is shown not as a cave with a boulder rolled across the opening, but as a chest tomb with a great slab on top that has been moved or broken (by an earthquake, Matthew says). Christ appears, his right hand raised in blessing and his left hand holding a long staff with at the top a cross, from the crosspiece of which hangs a pennant displaying the red badge of salvation. Thus far the scene contains all the elements you’d expect to find; however, this artist also adds an unexpected touch of humour. As the startled soldiers wake up, Jesus, stepping back into the world, plants his foot inadvertently on the stomach of the one lying closest to the tomb. It is perhaps as well that the details of the soldier’s face have faded so we cannot see his winded/wounded reaction to this giant step for mankind. The other soldiers, too, look blearily unsure of what is going on.

Of the few attempts in stained glass to show the sepulchre as a tomb ‘hewn out of a rock’, perhaps the 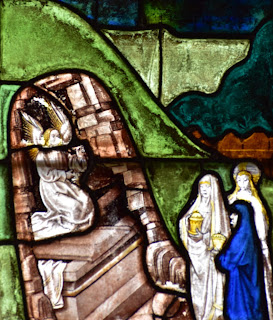 oddest is at Fairford(fig. ii). Here, there is certainly a hole in a hillside, but you could be forgiven for thinking both cave and hillside look curiously man-made. And once again there is an empty chest tomb – a tomb within a tomb – the lid of which has been spun around. Christ’s winding sheet now hangs over the side like a discarded bath towel. It needs the angel addressing the three women to restore a sense of biblical authenticity.  The four gospel writers, it should be said, each tell the story differently: Matthew has one angel addressing two women, Mark has him addressing three (Mary the mother of James, Mary Magdalene and Salome) while Luke has two angels telling the two Marys and Joanna that Christ is risen. John mentions only Mary Magdalene, who finds the tomb empty – no angel for her there; but she soon encounters Jesus himself in the garden, only to mistake him for the gardener. Of these conflicting versions, Mark’s (one angel, three women) is the source for the Fairford window. Only one of the three women, presumably Mary Magdalene, has a halo; later artists, however, have tended to play safe by giving haloes to them all. 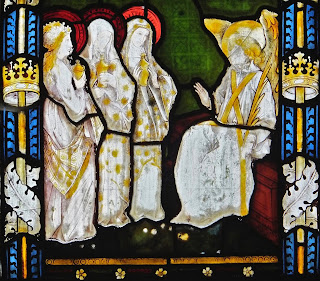 Two of my favourite 19th century Resurrection windows are from the Kempe Studio. The first is a very early Kempe window (fig.iii; 1871) by Wyndham Hope Hughes at St John’s Church, Waterbeach, near Cambridge.

The window is much faded, but I find the painting of the three women, lined up on the grass with their jars of embalming spices, curiously touching. It looks, too, as though the veil with its yellow stripe, worn by the youngest of the women, is as previously modelled by one of the Fairford mourners. Facing the women, who are lined up in front of what could be a vestigial trellis, sits the angel on a red chest tomb. The scene is reduced to its essentials, and its dominant colour scheme, red and green, offsets well the white and gold garments of the motionless women. 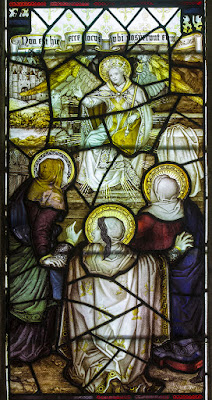 Finally, and in total contrast, I admire the same scene from a window in St. Bartholomew’s Church, Much Marcle (fig.iv; Herefordshire; 1889 – the artist was John Carter). Here the three women kneel before the Angel, with their backs to us – their haloes, therefore and most unusually, in front of their faces.

The angel is perched on the edge of the tomb. His wings are spread, largely blocking from view the walled city of Jerusalem behind him. He gestures towards the women as he speaks: ‘Non est hic ecce locus ubi posuerunt eum’ (“He is not here: behold the place where they laid him”; Mark 16:6) The older women wait for what he will say next, but Mary Magdalene has already turned her head, opened her mouth and raised her arms distractedly.

Kempe’s windows are sometimes criticised for being too static; but if we read them carefully, noting the cautioning hand on Mary’s elbow, we can sense the tension of the moment and can ourselves supply the question she is desperate to ask:

This is the third of three successive posts discussing stained glass windows relating to Maundy Thursday, Good Friday and Easter Day. The previous two posts can be accessed here:

You can read about these two books on The Victorian Web.