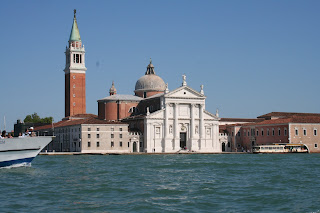 ‘Venice Inscribed’ is the title of a course I taught several times at Cambridge. I always enjoyed it, for Venice – which I first experienced forty years ago and have visited over twenty times since – never disappoints. If I haven’t been for a while, I get withdrawal symptoms. I have them now. And when that happens, I like to re-read one of my Venice books or, better still, buy a new one. This time I have bought three.

The first is Beastly Things (2012), by Donna Leon.  I think I’ve read all but two of her Commissario Brunetti novels. At first, I read them with huge enjoyment and admiration; latterly this tailed off somewhat, but I am pleased to say I think Beastly Things is among her best.  It is certainly topical: the plot hinges on contaminated meat getting into the food chain, and the chapter in which Brunetti comes face to face with death in an abattoir is as impressively written as it’s sickening to read.

But Leon’s hallmark is dialogue.  Chapter by chapter Brunetti goes around Venice, talking to people, never raising his voice, never wasting words, always probing. For light relief, there are conversations back at the Questura with his boss, the egregious Patta, after which he nearly always needs a drink and a tramezzino at the bar by the Ponte dei Greci or, if it’s midday, he heads home for lunch with Paola.

After twenty novels and counting, you might think there is little new to discover about the home life of the Brunettis. These days Leon plays down the emphasis on Paola’s cooking; perhaps that recipe book based on the Venetian food she prepares between marking essays on Henry James – she teaches at the University - and drinking prosecco was a spin-off too far. But Beastly Things does spring one surprise. On the wall of Paola’s kitchen hangs a priceless painting:

I don’t know why I bother to keep teaching,’ she said, and Brunetti did not remark that it was because she loved it. ‘I could stop. We own the house, and you make enough to support us both.’ And if things got rough, he did not say, they could always pawn the Canaletto in the kitchen.

Would you really hang a Canaletto (a gift from Brunetti’s ultra-patrician Venetian father-in-law) in the kitchen where you cooked fegato?

I confess this wasn’t the only time I was unconvinced. For the past few books I’ve found odd words or sentences that don’t ring true. In Beastly Things, I was astonished to see the word ‘underpass’ used for sotoportego, those covered passageways that in Venice often connect one calle with another. Underpass just seems wrong, and I’m puzzled to find it here: whether in the US (Leon is a New Yorker) or in the UK, an underpass is a road or path that goes under another road. I don’t remember tripping up over words such as this in earlier books.


I have always trusted Leon’s knowledge of Venetian topography, but here too there’s now a problem. During his tour of the abattoir, Brunetti has kept his fist so tightly clenched that on his way home he cannot stop his hand trembling:

As soon as the vaporetto pulled away from the embarcadero, Brunetti’s curiosity overcame him, and he took his hand from his pocket. He spread his fingers flat on his thigh, but instead of looking at them, he turned his eyes towards the angel flying above the dome of San Giorgio, still visible in the swiftly fading light.
He felt no tremor against his thigh, but before he looked, he raised his fingers a centimetre above his leg and left them there for a few seconds as he continued to consult with the angel, placed there centuries ago. (pp.221-2)

Alas, the angel isn’t on top of the dome of St. Giorgio Maggiore – he’s on the pinnacle of the 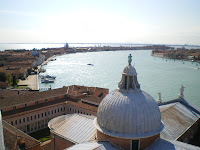 campanile. (It’s St. George above the dome.) What’s more, he hasn’t been there for centuries: the original angel was taken down only a few years ago, and I’ve seen him on display inside the church. The angel Brunetti admires is a replica. I’m almost ashamed of such pettifogging pedantry; however, to check whether or not Donna Leon’s style and vocabulary really have changed over the past ten years, I’ve gone back to one of my favourite books, A Sea of Troubles.  I’m afraid my original copy (paperback 2002) was a victim of my library cull , but I’ve found another in a charity shop, this time a 2009 edition. I still think the opening description of Pellestrina is one of Leon’s finest chapters, and I have enjoyed once more the discreet literary echoes – Brunetti’s description of Signorina Elettra as ‘so young and so untender’ for instance, and the ‘topless, endless sky’ above the laguna (topless, surely, as in towers of Ilium, and not otherwise). I vividly recall, from my first reading of the book, the shock of Bonsuan’s death – Bonsuan, the faithful boatman who pilots the police launch for Brunetti, and is murdered at the climax of the novel:

Because the shadow cast by Bonsuan’s body fell down the stairway, blocking the light, Brunetti looked down at the first step to see where to set his foot. When he looked up, he saw that Bonsuan had sprouted a branch. Even before he registered the impossibility of this, the panic he’d felt during the storm leaped at him. Men don’t grow branches; pieces of wood do not grow out of the chests of men. Not unless they have been pushed in from the other side. (pp.298-9)

Which is indeed what has happened. Except that now it is no longer Bonsuan. To my astonishment he has been airbrushed entirely from the 2009 edition, and replaced by someone else: Montisi, whose seven-letter name can conveniently fill every gap created by the excision of poor Bonsuan’s.

WHY? Diligent desk research (sc. extensive googling) has produced no answer. But I have my own theory: after years of following Brunetti, I suspect the explanation involves threats, money, family honour and lawyers: in Donna Leon’s novels, it usually does.

The third Venice book I have been reading is Watermark, by Joseph Brodsky. I’ll write about it in Venice Inscribed (ii).

Read my previous and subsequent Venice posts, written at different times between 2011 and 2016 :