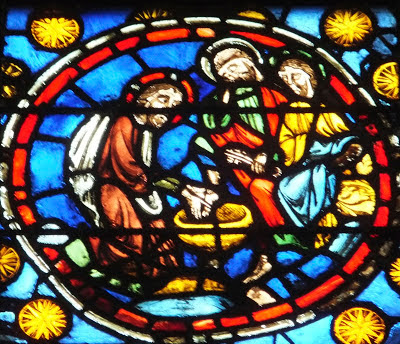 Were medieval men and women, especially those who did not have to trouble themselves with reading and writing,  particularly long sighted? They would have found it useful when looking at stained glass. We are used to being told these days that the great windows of European cathedrals, depicting scriptural and historical narratives, were the ‘bible of the poor’. This analogy only works, though, if the poor could actually see and make sense of the images in windows that might be fifty feet or more above their heads.

But even assuming they could make out images we struggle to see without a telephoto lens, how might they have ‘read’ and enjoyed what they saw?

I pondered this last week in Rouen Cathedral. The windows in the déambulatoire behind the High 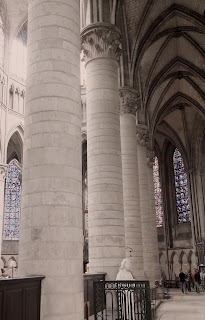 Altar rise from well above head-height almost to the vault, and because the passage is relatively narrow, it’s hard to stand far enough back to take in the detail of the any but the lower glass. Of course, the initial impact is exhilaratingly abstract, and I’ve no doubt that stained glass artists in the past century (think of Coventry Cathedral, or the Kaiser Wilhelm Gedächtnis Kirche in Berlin) have modelled their designs on such abstraction. Nevertheless, the individual scenes are written with the immediacy of a graphic novel, and actually with a good deal more animation.

Look, for instance, at the Rouen stained glass 'medallion' I’ve chosen, an early scene from a sequence of pictures telling the story of the Passion. Here is Jesus, kneeling, with a golden (but presumably brass) bowl beside him. He’s washing the feet of his disciples, and has reached Peter, whom we can identify by the keys he holds in his hand – the keys of the Kingdom, with which Jesus will later entrust him. Another disciple, unidentified this time, sits beside Peter.

The image is radically simplified: although this event occurs at the start of the Last Supper, there is no attempt to suggest the Upper Room or the table set for thirteen people. The focus is entirely on the action taking place.  The footwashing image itself, the feet and the hands painted onto a single piece of glass, is framed within a border of lead, just below the centre of the not-quite-circular medallion. Peter’s ankle rests in the left hand of Jesus; the other hand washes his toes. Peter himself seems tired: his cheek rests on his palm, and he appears to have his eyes closed, as if in anticipation of his falling asleep later that evening in the Garden of Gethsemene (‘Could ye not watch with me one hour?’ Jesus will ask him reproachfully). The other disciple glances sideways to check how he is reacting. Jesus has his eyes wide open, but he looks not at the others but into some future only he can see. It is as if the story takes place simultaneously in time and out of it, and this idea is emphasized by the way the medallion functions almost like a celestial body floating in space: it is, after all, surrounded by stars.

The composition, too, demands our attention. There is an imbalance in the picture: Jesus, a larger figure, occupies one half of the circle with only the blue background (heavenly blue?) behind him; the disciples crowd into the other, their haloes and robes breaking into the border that encircles the medallion . This red border, too, is important: it is echoed in miniature by the halo around Jesus’ head. Those flecks of pale blue glass in the halo (placed as it were at nine o’clock and twelve) are not just to break up the pattern: symbolically they indicate the four points of the cross, the other two of course obscured behind the head. I count at least fifty individual pieces of glass making up that red and white border; no two pieces are exactly the same, certainly not in shape, rarely in colour. In the medallion as a whole, there are over two hundred. Each has had to be chosen, cut to an already pre-drawn pattern, painted if there is outline detail or decoration on it, fired (sometimes more than once) then assembled, fitted together into the lead ‘cames’ – H-sectioned strips of lead into which each piece of glass is sealed using gum or beeswax – and secured within a larger panel which will be held in place by being attached to the two iron saddlebars you can see crossing the image horizontally. Hard to imagine the difficulty (and danger) of installing such a fragile thing within a larger sequence of images and patterns; ensuring that the whole window is fixed securely enough to withstand the stresses of the building and the extremes of the weather. There are few, if any, other forms of visual art that involve so many different skills and so much artistry and craftsmanship – cinema, perhaps, the only other art dependent upon light passing through a transparent medium. 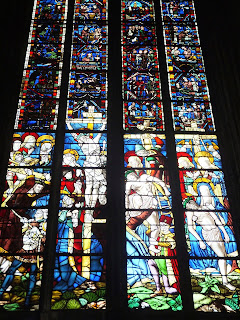 The guidebook tells me that the golden stars surrounding the medallion were restored in 1462 by Guillaume Barbe, the master glazier responsible for much of the spectacular 15th century glass on the north side of the cathedral. We need guidebooks for information such as this, though in this age of apps and podcasts guidebooks are starting to look a little, well, quaint. Ironically, though, as we return to the era of the spoken word, and as we walk around listening to a voice in our ear, our experience is not so different from that of our medieval forebears. No doubt the voices in their ears belonged to the monks who, for a small fee, would tell them approximately what was what in which window.

Of course, not even the monks could have seen – as we can - the whites of the disciples’ eyes. Here technology truly helps. Now we can virtually see with our own eyes why stained glass really is one of the crowning achievements of medieval art.

In the second of this mini-series, Reading Stained Glass (ii), I shall focus on a window in a church in the Isle of Oxney in Kent, a window that can be read close-up, and at ground level. Meanwhile, I have previously written about stained glass in
Strasbourg: stained glass and storks
George Herbert’s ‘Brittle crazie glass’
and about Rouen Cathedral in
Thomas Hardy’s Bird’s-eye View .

[Illustrations: (i) Rouen Cathedral: 13th century medallion; (ii) the ambulatory at the E. end of Rouen Cathedral; (iii) window in the N. aisle, showing in the lower portion,  Crucifixion scenes by Guillaume Barbe (NB how the 15th century work actually intrudes into the 13th century glass above it). Photographs © the author
Posted by Adrian Barlow at 10:50