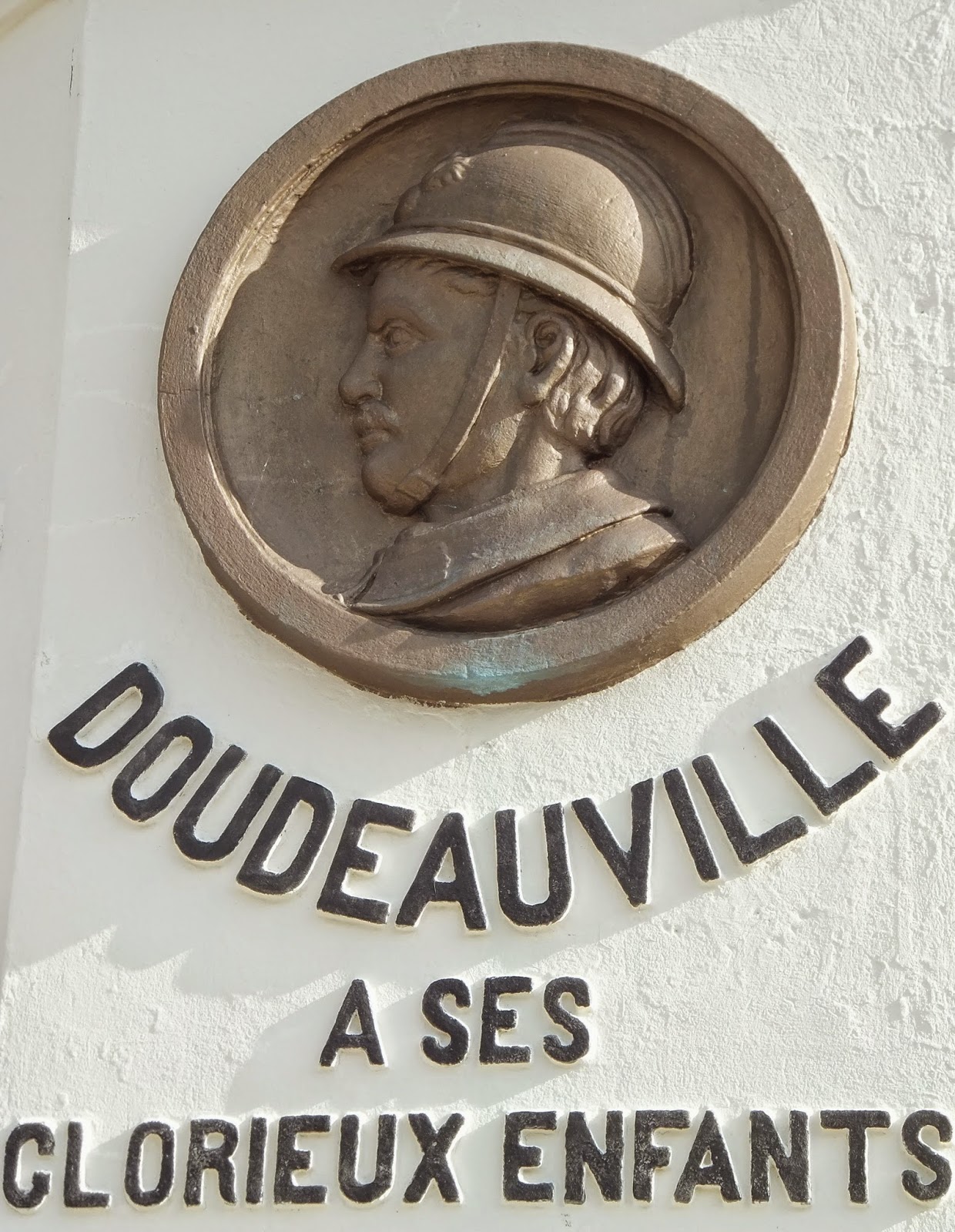 The Rue Honteuse - literally, the Street of Shame – leads straight to the gate of St. Bertulphe’s church at Doudeauville, a village in the Vallée de la Course. I have been staying there this month. The river Course itself, really no more than a babbling brook, rises above Desvres and runs down through the valley to Montreuil-sur-Mer. In front of the church stands one of the most remarkable war memorials I have seen in France. Topped by a lowering, almost life-size Calvary (calvaires – monumental crucifixes – abound in this part of France), the plinth on which the Calvary stands is a brightly decorated memorial repainted for the centenary of La Grande Guerre .

The plinth is octagonal. Facing the visitor who approaches the church, a bronze (but only bronze-painted) medallion depicts the profile of a cheerful French poilu. No mournful hero he. He has a flourishing moustache and his Adrian (the distinctive French helmet) is held in place by a tightly buckled chinstrap. Beneath the medallion are the words

and underneath this inscription, two crossed banners with the French tricoleur. On either side of this first face are panels listing the dead: thirty men between 1914- 1920. On the remaining sides of the plinth are a jaunty procession of palms, medals, ribbons, flags, grenades and shell heads — altogether a carnivalesque fusion of high patriotism and folk art.

Churchyard and church offer plenty of evidence of war both before and after 1914-18. The church’s 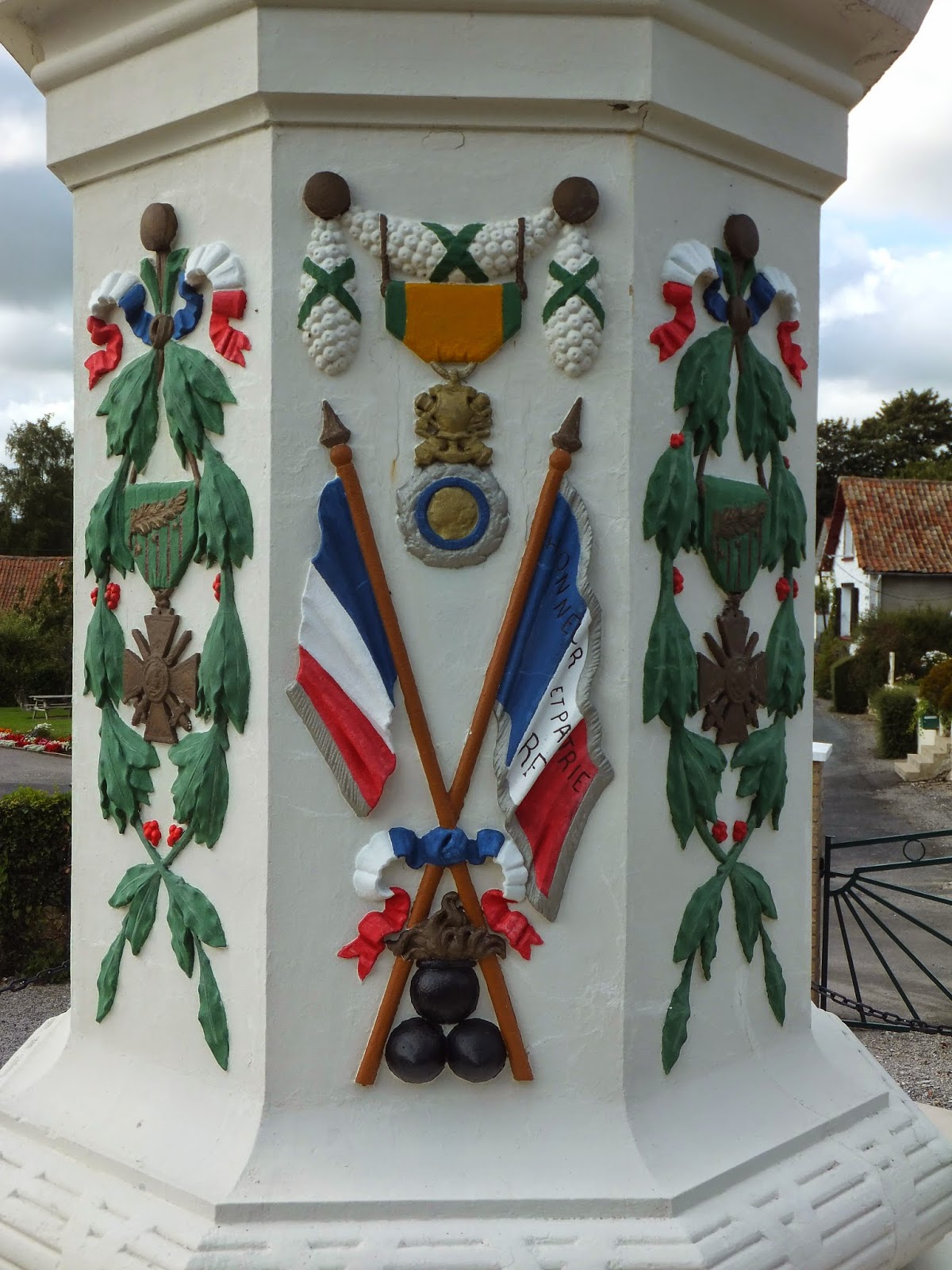 walls, north and south, are pockmarked with dents and holes from musket balls, as if at some time the church has been besieged – did the villagers ever have to take refuge there, sometime in the 17th or 18th century? Who was shooting at whom? And why? It looks as though later generations of schoolboys have gouged most of the balls out with knives, but some shot still remains embedded in the chalky material of which the walls are made. Indeed, the walls have proved irresistible to the young of Doudeauville: dates as far back as 1670 are clearly visible, and I was touched to see a discreet and hastily-carved little inscription: Pierre à Renée 1737.  Nearby, however, deeply incised and in large letters, someone had carved out the admonition, ‘NASCI EST MORI’ – ‘To be born is to die’. How many villagers in Doudeauville at any time before the First World War would have been able to read, let alone write, Latin? It reminded me of Pozzo’s gloomy summing up of life in Waiting for Godot —

They give birth astride a grave. The light gleams an instant, then it’s night once more.

Graves and gravestones in northern French churchyards are usually large flat tomb chests, set low into the ground, and those in Doudeauville are no exception. On top of each one, family and friends place small engraved plaques expressing affection (‘Chère grandmère’ etc.). Sometimes old soldiers pay their respects: ‘Á notre camarade’. On several tombs here, however, I saw a message I’d not noticed before. The wording was always the same: ‘Les Prisonniers 1939-1945’. It was a reminder that Doudeauville had been a village firmly under German control during the Second World War, and that most of its men would have been deported to work as forced labour elsewhere in occupied Europe. One name indeed had been added to the village war memorial with the inscription ‘Mort en déportation’.

Then I noticed an older gravestone whose faded lettering took a moment to decipher:

I confess, to my shame, I had never heard of Tahure, which just shows how little I know about the First World War from any point of view apart from a British one. The German army captured Tahure, a small village about 40km east of Reims, in September 1914 and held on to it until 28th September 1918. The fighting around it throughout the war was so devastating and costly that a French national necropolis and a huge memorial were erected there in 1924. Apparently there was a time when being able to say “I was at Tahure” was as much a badge of honour as saying “I was at Verdun”.

I have felt a strange compulsion to discover as much as I can about Tahure – and about Eugene Eurin, whose name was added as an afterthought to his family gravestone, and (I was surprised to see) doesn’t appear on the Doudeauville war memorial at all. But he was born, I have found, not in Doudeauville but in nearby Bécourt in 1895; and when called up on his twentieth birthday he was living in Zoteaux, over the hill and five miles away. Aged 20, he would have travelled to Abbeville (probably the longest journey of his life thus far, about 40 miles) to enlist in his local regiment, the 328e Régiment d’Infanterie. He is described in the French Army records as a soldier ‘2me Classe’, still deemed to be a recruit at the time of his death ‘Au Front’. Indeed, when whatever happened to him at Tahure happened, he had been in the army only four months.

Actually, we know quite a lot (from the official record at least) about what happened – to the regiment, if not to Eugene Eurin. They acquitted themselves so well on October 30th and 31st, that General Pétain himself wrote formally to congratulate the 328e on adding ‘une page glorieuse a son historique’.  In his dispatch, he described the action in graphic terms I translate loosely thus:

Despite an unceasing and ferocious bombardment by shells and poison gas, a bombardment which entirely destroyed trenches, lines of communication and dug-outs, decimating its effective fighting strength … the 328th R.I. not only maintained a completely unbroken front but inflicted enormous losses on the enemy.

Once the war was over, little by little the population returned. All the houses had been destroyed, the fields had been furrowed into trenches and then filled up with shells, mines and the shattered remains of human bodies ….

The phrase I’ve translated as ‘furrowed into trenches’ is ‘sillonnés de tranchées’. I suspect an ironic nod here in the direction of La Marseillaise:

Did Eugene Eurin, I wonder, sing those words as he marched towards Tahure? There is a remarkable collection of sepia photographs taken at the Front and even in the trenches of Tahure in 1915: I’d like to think his face might appear in one of them: there are few enough other surviving traces of his existence. As far as I can discover, he has no known grave. Perhaps he was caught in one of those trenches destroyed by shelling; probably his was one of the shattered bodies littering the fields when the war was over. I’d like to go to Tahure one day, and see the place for myself. All I can say for a fact is that Eugene Eurin is recorded on the war memorial of Zoteaux – but only just: unlike the flamboyant memorial at Doudeauville, the sombre stonework of the little roadside obelisk at Zoteaux is crumbling, and his name has all but disappeared.

[illustrations: the war memorial at Doudeauville.
Posted by Adrian Barlow at 07:08