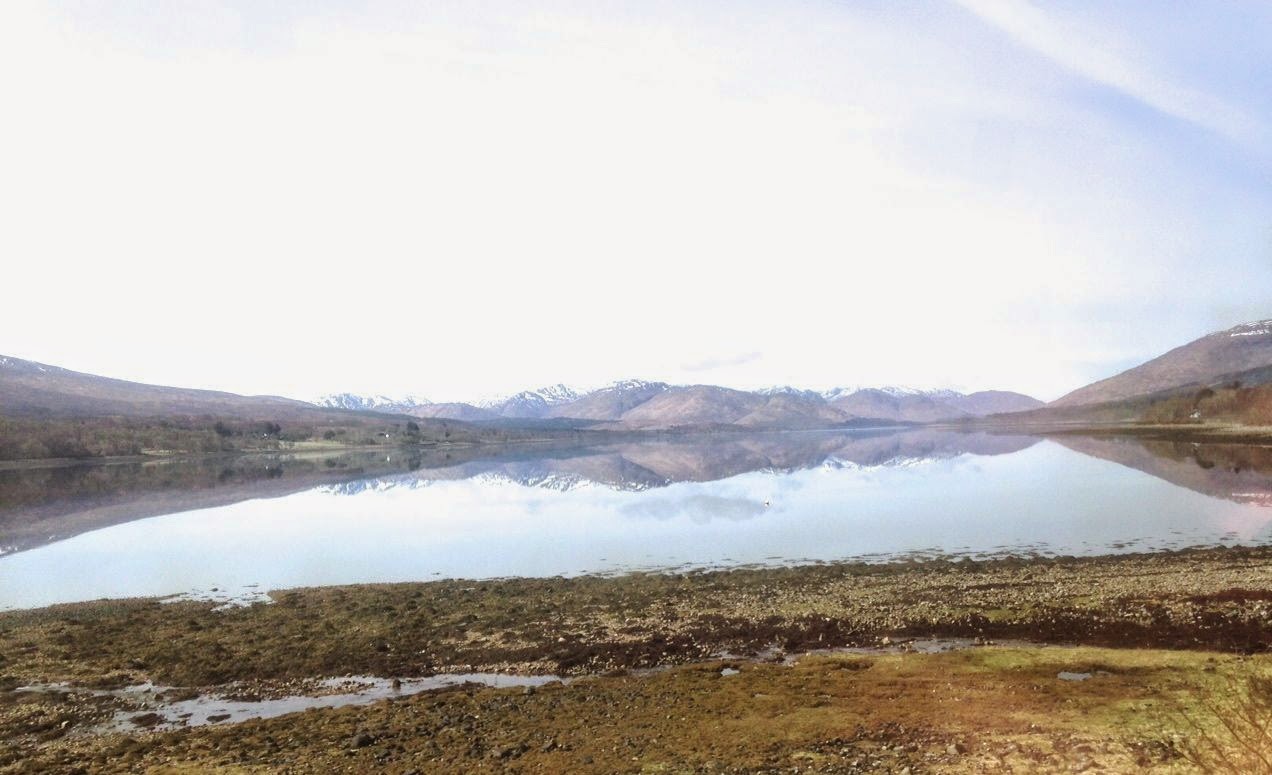 Easter in Scotland. We have spent five days exploring the Highlands by rail.

I’m not particularly a railways enthusiast and I don’t have favourite train journeys, but I do have some particular views I always look forward to: Durham Castle and Cathedral, best of all, suddenly revealed when the train emerges from a cutting onto the great viaduct high above the city. In winter, I love crossing the flooded fenland washes between the old and new Bedford Rivers in Cambridgeshire: by moonlight this inland sea, seen from a train window, is an awe-inspiring, disorientating sight.

But these are glimpses, moments only. The long journeys between the east and west of Scotland, from Inverness to the Kyle of Lochalsh, or from Fort William to Mallaig are something else entirely. Here, herons stand beside every stream and on the shores of each successive loch. Then, later, when your route takes you through what is often simply, but spectacularly, wilderness with mountains; when the only living creatures you see are red deer, buzzards or feral goats; when the lichen encrusting trackside trees creates eerie thickets, it’s no surprise to learn this is the route taken by the Hogwarts Express in the Harry Potter films. Stations are few and far between (often, request stops only), and the line ends almost at the sea’s edge: the straits separating mainland from island -  Eig, Rhum, Skye. From the rocks, cormorants fly low-level sorties just above the water, then disappear, then surface again a hundred yards further on.

All this one can see from the (relative) comfort and through the grubby windows of the train carriage. I admit, though, it’s hardly real exploration, and since coming home I have been reading Samuel Johnson’s account of his journey with James Boswell through this same countryside in 1773, heading for the Western Isles. My first thought was to ask why on earth the man who regarded London as his natural habitat wanted to go there in the first place. His answer is almost childishly simple: ‘I had desired to visit the Hebrides, or Western Islands of Scotland, so long, that I scarcely remember how the wish was originally excited.’ After reading this, I can only say that my admiration for the good Doctor has increased no end. His appetite for physical and imaginative experience, his readiness to encounter for himself  ‘one of the great scenes of human existence’, is something I had not expected of him: 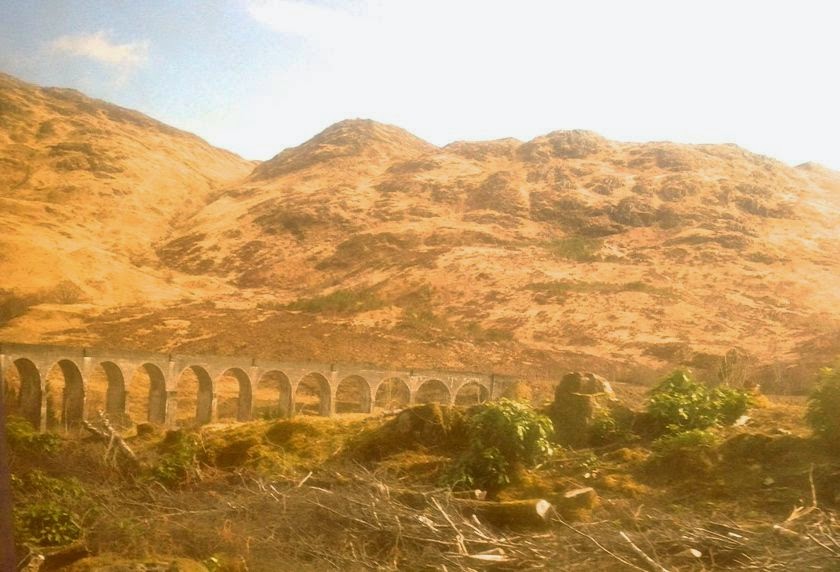 Regions mountainous and wild, thinly inhabited, and little cultivated, make a great part of the earth, and he that has never seen them, must live unacquainted with much of the face of nature, and with one of the great scenes of human existence.

From his first-hand experience of this Highland wilderness, Johnson is able to generalise an uncompromising conclusion about how far man is from being the measure of all things:

We were in this place at ease and by choice, and had no evils to suffer or to fear; yet the […] phantoms which haunt a desert are want, and misery, and danger; the evils of dereliction rush upon the thoughts; man is made unwillingly acquainted with his own weakness, and meditation shows him only how little he can sustain, and how little he can perform.

From time to time on this journey, Johnson needed interpreters when encountering local people who spoke only Gaelic. Today, although few people speak Gaelic, you find it everywhere: throughout Scotland, on road signs and at railway stations, place names are written in both Gaelic and English, Gaelic first. Johnson would not have approved: ‘The Earse language,’ he declared, ‘is the rude speech of a barbarous people, who had few thoughts to express, and were content, as they conceived grossly, to be grossly understood.’ Thirty years later, however, another English visitor took a more generous view of this language he could not interpret:

No Nightingale did ever chaunt
More welcome notes to weary bands
Of Travellers in some shady haunt,
Among Arabian sands;
A voice so thrilling n’er was heard
In spring-time from the cuckoo-bird,
Breaking the silence of the seas
Among the farthest Hebrides.

‘Will no one tell me what she sings?’ asks William Wordsworth as he listens to a ‘solitary Highland Lass’ he encounters on a walking holiday in Scotland in 1803. He wonders whether she is singing a traditional heroic ballad or something more humble:

Some natural sorrow, loss, or pain,
That has been, and may be again?

The girl sang, Wordsworth reports, ‘As if her song could have no ending’.  The poem ends, characteristically, with the poet recalling how the song he could not understand nevertheless continued to move him ‘Long after it was heard no more’.

I have always found this poem, ‘The Solitary Reaper’, appealing and included it in The Calling of Kindred,* an anthology I edited over twenty years ago. My title signalled the way readers and poets are engaged in a conversation, across countries, culture and time; in the Introduction I connected Wordsworth’s  ‘Solitary Reaper’ with a poem by the New Zealand poet, Meg Campbell; ‘Loch, Black Rock, Beautiful Boat’. This poem begins with a recollection of the three pet names given to the poet as a child:

‘The loch, the black rock,
the beautiful boat’ – these are
the names my father gave me,
brought from his boyhood
haunts in Old Caledonia.

The poem is an affectionate statement of her present feelings for her elderly father, the poet reflecting that though she ‘lost out, somehow, / in the tussle for his affections’, still

… it matters to me more than ever
That he gave me those names –
‘Aline, dubh sgeir, fear bata …
the loch, the black rock,
the beautiful boat.

This poem, too, (like many poems about children and fathers) moves me very much and I’m glad that my Easter weekend of train travel in Old Caledonia has prompted me to revisit these old friends –  Johnson, Wordsworth and Campbell – once again.

*The Calling of Kindred: Poems from the English Speaking World (Cambridge University Press, 1993)

[illustrations: two views from the window of the Fort William – Mallaig train: (i) Loch Eil; (ii) the Glenfinnan Viaduct.

Text and photographs copyright the author.