'Bad shoving and deep water’: writers on the Thames 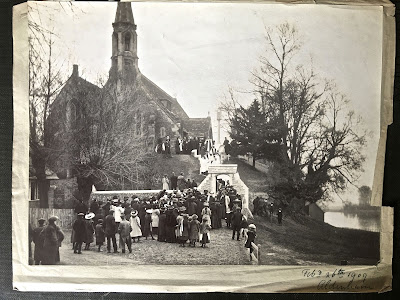 This photograph has puzzled me for some time. A  country church on a steep little hill, with a river beside it; a service of some kind taking place in the open air, conducted by a bishop in front of what looks like a new war memorial near the church porch; the choir lined up on steps leading from the little lychgate. Apart from the clutch of local dignitaries around the bishop and one family at the bottom of the slope but within the churchyard, all the remaining villagers are gathered in the open space outside the wall. Women and children greatly outnumber men. The women, all with hats, are wearing what may be their Sunday best, and the girls have clean aprons. A few boys stand on the grass near the gate, watching proceedings; are those Eton collars round their necks? One of them trails a cricket bat, though this is winter: the trees are bare, the adults all wear coats and hats (of course) and someone is putting up an umbrella. The date can be pinpointed precisely, for written below the photograph are these details: ‘Feb[ruar]y, 26th 1909, Aldenham’.

Edwardian England, in the year my father was born.  It’s not a posed picture – nobody is looking at the camera – but in its way it is a portrait of a community.  I had assumed that this must be Aldenham in Hertfordshire, but Aldenham Herts. is a small town and it’s not on a wide river. The Colne, which sidles past, is little more than a brook. Ah, the power of the internet! Within hours of my picture being posted on Twitter, I had learned where this was: not Aldenham at all – but Clifton Hampden, a village on the Oxfordshire bank of the Thames. It has doubled in size since the photograph was taken, but still has fewer than 700 inhabitants.

Once upon a time I was fascinated by punts and punting: I collected pictures and books, and took a punt out whenever I could. Forty years ago this year, I even began to keep a punting diary, recording all my outings. It is beside me as I write – and so are some of my most prized punting books. In these, Clifton Hampden features frequently.

The Oarsman’s and Angler’s Map of the River Thames from The Source to London Bridge (London: Edward Stanford Ltd.) is a seven-foot long, linen-backed, fold-out map of the river. My 1927 edition combines a Thameside gazeteer with detailed, if rather condensed, notes on how to punt each stretch of the river from Cricklad Cricklade (Glos.) to  Putney. Thus its entry for Clifton Hampden reads:

Clifton Hampden Br. Station: Culham, G.W.R., 1¼ m. Inn: The Barley Mow on Berks side of bridge. Boatyard: Casey, at Bridge Toll House, will look after boats, and has a few to let.
From Clifton Bridge keep right bank, but to left of reed beds and islands at Burcott: then bad shoving and deep water to lock.

The artist George Dunlop Leslie, whose book Our River (1881) is one long paean to punting on the Thames, knew all about the problems of shoving on this stretch of the river: ‘The punting here is peculiar,’ he declared; ‘mud is a bad thing, but there is such a thing as too hard a bottom, for here the pole rings with a clunk as it strikes the ground, and slips aside without any hold.’ But he admired the view: 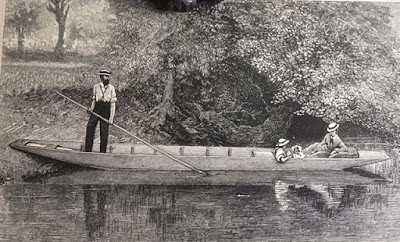 At Clifton Hampden, as if to make up for its dullness, the river suddenly comes out in quite a novel aspect. For a short distance it runs over a bed of hard sandstone; the little cliff on the Oxfordshire side, from which the village is named, is of this stone, and quite unlike anything else on the river. With its ivy bushes and small church perched on the top, it resembles some of Bewick’s vignettes very strikingly.

Jerome K Jerome, in Three Men in a Boat (1891) describes Clifton Hampden as ‘a wonderfully pretty village, old-fashioned, peaceful, and dainty with flowers’. He doesn’t mention the church; he’s more interested in the local pub, The Barley Mow, whose ‘low pitched gables and thatched roof and latticed windows give it quite a story-book appearance, while inside it is even still more  once-upon-a-timeyfied.’ Such quaintness comes at a cost, however:

John Ruskin visited Clifton Hampden, and if he climbed up to the church he was no doubt horrified by the make-over given it by Sir George Gilbert Scott. Ruskin’s views on church restoration were uncompromising: ‘Do not let us talk then of restoration. The thing is a Lie from beginning to end … It is impossible, as impossible as to raise the dead, to restore anything that has ever been great or beautiful in architecture.’ But Ruskin was more interested Clifton Hampden’s old bridge (originally Tudor, but also – as it happens – restored by Gilbert Scott. Local people kept their punts moored under its arches.)  Elizabeth Robbins Pennell, in The Stream of Pleasure (1891) tells the story of how Ruskin, watching the sunset reflected in the river, was distracted by a small boy he saw suddenly

run from one side of the bridge to the other, and lean far over the parapet with eyes fixed upon the current beneath. Of what was he thinking, this little boy? Was it the hurry of the water, of the beauty of the evening, or had this speed and loveliness already awakened him to higher and holier thoughts? And as Ruskin wondered, a boat drifted from under the arches into the light, and the little boy, leaning still lower, spat upon the oarsman, and dodged quickly and ran away, and Ruskin went home a sadder, if a wiser, man.

I intend to visit Clifton Hampden this summer. I may even call in at the Barley Mow. But I shall definitely climb up to the church, and pay my respects at the memorial to Lord Aldenham, designed by Walter Ernest Tower and unveiled by the Bishop of Oxford on 26th February, 1909.  If  you want to know why I’m interested, you’ll find the answer in my forthcoming book, Kempe: the life, art and legacy of Charles Eamer Kempe, due to be published by the Lutterworth Press in 2018.

[Illustrations: (i) Clifton Hampden Church, 26th February 1909 (Kempe Trust Archives)
(ii) A stretch of the Thames from the Oarsman’s and Angler’s Map of the Thames.
(iii) G.D. Leslie, ’The Author’s Punt' from Our River, 1881
Posted by Adrian Barlow at 13:44