‘So Teach us to Number our Days’: diaries & diarists 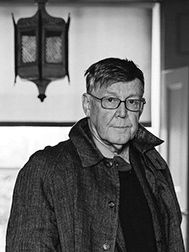 At the year’s end it’s always a pleasure to read the latest excerpts from Alan Bennett’s dairy, published annually in the London Review of Books. There are things one always looks out for – name dropping, for instance. 2017 is a vintage year: Bennett begins with ‘Tony Snowden and Princess Margaret’ and ends with ‘the (much missed) Debo, Duchess of Devonshire’.  In between come Gielgud and Guinness, Derek Jarman and Patrick Garland, Cecil Beaton and Coral Browne – a veritable dramatis personae.

Bennett is surely the Eeyore of modern letters. He notes with equal resignation and pleasure that The Oldie has called him ‘trademark lugubrious’, but at the same time he can be endearingly funny. Reading in bed one night he contrives to fall asleep ‘with a very uncomfortable bunch of keys in my pyjama pocket’, the consequences of this left to the reader’s wincing imagination.

I enjoy spotting Bennett’s other trademark: his habit of ending sentences with an added, abbreviated, comment – abbreviated because the author has left out the verb one would expect to find there. Here are two examples from 2017:

(9th June, about Theresa May): Notable that she keeps referring to ‘our country’ whereas an ordinary person as distinct from a politician would say ‘this country’ – ‘our’ paradoxically not an inclusive term.’

(29th August, in Paris): ‘We go into a creperie opposite the St Germain covered market hoping for some tea, in the window a solitary piece of cake.’

What is missing from these examples is the active voice. I used to assume that this was just a form of diarist’s shorthand, thoughts and observations tagged on rather than incorporated into the sentence. But it crops up in different contexts too – in The History Boys (2004) for instance – where Hector is arguing with his VIth Form students about how to write an Oxbridge entrance essay on the Holocaust. ‘Why can’t you simply condemn the camps outright as an unprecedented horror?’ he asks. Lockwood cockily replies:

‘No point, sir. Everybody will do that. That’s the stock answer, sir …  the camps an event unlike any other, the evil unprecedented, etc., etc.’

Here Lockwood uses the Bennett ellipsis quite appropriately, as if reeling off headings for an essay. But Hector replies:

‘No. Can’t you see that even to say etcetera is monstrous? Etcetera is what the Nazis would have said, the dead reduced to a mere verbal abbreviation.’

‘Mere verbal abbreviation’ defines Bennett’s literary mannerism precisely, if inadvertently. But it’s when this ellipsis finds its way into the speech of other characters – albeit one such as Hector, in many ways a mouthpiece for Bennett himself – that I start to ask whether what began as diarist’s shorthand isn’t showing signs of repetitive strain. Might Hector’s denunciation not have been stronger if he’d actively condemned the Nazis for reducing the dead to an etcetera?

I have spent a lot of time with diaries recently. While writing my book on Charles Eamer Kempe* I have had access to the diary of Wyndham Hughes, a fine but forgotten artist, who was Kempe’s leading draughtsman during the 1870s. Hughes was a lifelong diarist, each volume prefaced with ‘The record of our days and years’ or ‘So teach us to number our days: that we may apply our hearts unto wisdom’ (Psalm 90). For me, his diary has been invaluable, describing his friendship with Kempe, listing many of his key commissions (previously unidentified) and sometimes containing precious ephemera slipped between the pages – this 1876 letter, for instance: 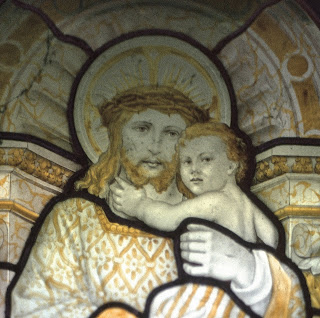 My dear Hughes
Thanks for the drawing which I hope, (& think it aught) will pass the Royal Critic. I think I should take with me in the morning the former drawing (charcoal) to remind H.R.H. of the architect[ural] background &c – as well as to show the changes in the figure. The Child is very successful now. Could you bring me the old drawing by 9.15. I have to be at the Palace by 10.
Yours, C.E.K

This never-before-seen letter refers to the most significant commission Hughes ever undertook for Kempe: a memorial window for Queen Victoria’s grandson.‡ The window established a friendship between Kempe and the Royal Family, his reputation thereby greatly enhanced. To find such a letter, in such a diary, is one of a biographer’s rewards. 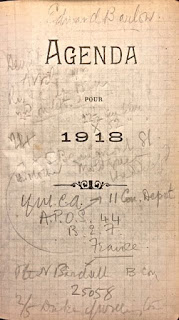 The other diary I’ve been reading recently is my grandfather’s. Edward Barlow, a Baptist minister, was not a diarist by habit; however, in 1917 he went to France as a YMCA padre and kept a diary of the two most remarkable years of his life. Working in a transit camp near Rouen, he met and recorded conversations with ordinary soldiers on their way to the Front. Here is one such encounter, from 100 years ago today: 1st January 1918:

A draft of men from the Camp for Base missed their train by 30 mins. & consequently had a long wait in our Hut. One spoke to me in great trouble about his home in a colliery village (Northumberland). He showed me a letter from his wife’s mother which he received last Friday saying that his wife was going out with another man & cared no more for him than she did for her. The children had for a time been with her mother but now they were taken off by a black woman. His wife had gone to the dogs & was a disgrace to them. She hadn’t got any money but wasted it on dressing herself like a fairy & going with the man in the evenings to picture houses and the theatre.

The man was greatly upset & said he would try to get home without anyone knowing it & catch his wife with the man. It would pay the man to keep out of his way & he would get his wife, who was in munitions, out of the town. She was 29.

My grandfather never revealed that he had kept this diary; my father found it among his papers after his death, and I have it now.

* Kempe: the life, art and legacy of Charles Eamer Kempe will be published by Lutterworth Press in Summer 2018. Further details to follow in due course.

‡Prince Friedrich (Frittie) von Hessen-Darmstadt (1870-1873) was the second son of Queen Victoria’s daughter, Princess Alice, wife of the Grand Duke of Darmstadt and Hesse. A haemophiliac, Frittie was the first of Victoria’s grandchildren to die. He was buried in the Neues Mausoleum at Rosenhöhe, on the outskirts of Darmstadt, and it was for the window in the mausoleum that Kempe was commissioned to produce the stained glass designed by Wyndham Hughes. The commission was brokered by Alice’s brother, the Prince of Wales (later Edward VII) and he is the ‘Royal Critic’ referred to by Kempe in his letter to Hughes.

Illustrations] (i) Alan Bennett (National Theatre); (ii) Window (1877), designed by Wyndham Hope Hughes for the Royal Mausoleum in Darmstadt. The image of the child is a likeness of Prince Friedrich. (iii) Edward Barlow’s Diary for 1918, while serving with the YMCA at No. 11 Convalescent Depot, Buchy (Nr. Rouen).   Photos (ii) and (iii) © author
Posted by Adrian Barlow at 09:19