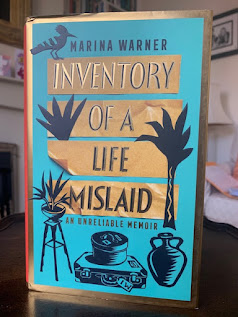 ‘Never underestimate titles.” This was a mantra I repeated to students, young and old, many times throughout my teaching career. I used it particularly when talking about poetry, but it’s not the titles of poems alone that deserve our attention, and I’m intrigued by a new book by Marina Warner, reviewed recently in the Times Literary Supplement, Inventory of a Life Mislaid: An unreliable memoir. Both title and subtitle invite comment.

In non-literary contexts, of course, the word inventory can suggest a long list of contents, often laboriously compiled. Whose heart has not sunk on arriving at a holiday cottage to find  an inventory of all the knives, forks and teaspoons, together with a warning about forfeiture of deposit if a single spoon is subsequently found to be missing? One prefers to be trusted.

So it’s a surprise to come across Marina Warner adding the subtitle ‘An unreliable memoir’ to warn readers that she herself is, well, not to be taken literally at least. The TLS reviewer, Ann Kennedy Smith, reminds us that ‘Warner’s books include novels and short stories as well as studies of female myths, iconography and fairy tales’. These suggest a preoccupation, not with the historical as such, but rather with the enduring and dangerous potency of myths. I remember that Warner’s 1994 Reith Lectures, Managing Monsters, were as challenging as they were entertaining: beginning with the myth of the She-Monster, she went on to examine the threads linking ancient heroic myths with modern male machismo. In the last lecture she dissected modern myths of national identity (‘Home: Our Famous Island Story’); post-Brexit, her words spoken then should surely haunt us now.

I like literary reviews to give me a clear sense of what a book is about, how it is shaped and what are its strengths and weaknesses. Whether or not I shall go on to read the books being discussed – and, of course, most of them I won’t – I want to finish reading a review feeling glad to know more about a book, a subject, an author than I did before. Ann Kennedy Smith makes clear her enjoyment of Warner’s ‘imaginative retellings’ and in a single sentence both points to a key theme of Inventory of a Life Mislaid and describes how the book works:

This is a wonderfully rich, partly mythical memoir that sifts through the past to connect a family’s secrets to the deep-rooted colonial assumptions that still resonate in a post-Brexit Britain.

‘Sifting through the past’; it’s from her excavation and selection of events, photographs, objects and memories that Marina Warner has reconstructed the story of her parents’ unlikely marriage. In doing so she has set out to reclaim for her mother, Ilia, the identity she buried when, as a young and penniless Italian wartime bride, she married a much older ex-Etonian army officer with a colonial self-assurance quite unadapted to the post-war era of Imperial retreat. From the TLS review, one learns that Marina Warner’s book ‘unfurls at an unhurried pace, and embedded in the text are lengthy digressions, some previously published as essays in the London Review of Books’. This sounds a cautionary note, but one partly muted by the reviewer’s concession that, ‘If occasionally these asides slow down the narrative pace, they are never dull.’

A memoir, strictly speaking, is history and/or biography written from personal experience. There must always be a subjective element to such a book, sometimes explicitly defined by its title –Winston Churchill as I Knew Him (1966), for example, published a year after Churchill’s death by his long-standing friend, Violet Bonham-Carter. You wouldn’t expect a memoir often described as ‘an affectionate portrait’ to be as objective as an historical biography.

But memoirs should be distinguished by something more than subjectivity.  The author Alison Light, whose book A Radical Romance: A memoir of love, grief and consolation, won the 2020 PEN Ackerley award for literary autobiography, just recently reflected on the experience of writing memoir. It gave her, she says,

…room to reflect on earlier selves and on the on-going illusion of being a self. Memoir is often closer to reveries and dream, evoking the lyrical rhythms of poetry rather than prose. As it moves through different kinds of time and ‘times out of time’ – falling in love, illness, mourning – narrative or plot gives way to images and scenes. I had the sense of halting, even defeating, time.

This account surely gestures towards a kind of poetics of memoir writing, marking out a territory quite different from the characteristically linear landscape of history. It suggests to me that if a memoir is ‘unreliable’, this isn’t because it is untruthful or inaccurate but because its ambitions and literary resources are essentially different.

I can think of some eminent historians who would have no truck with my tentative distinction, but one historian who articulated something similar, based on his own experience of writing both history and memoir, was Richard Cobb (1917-1996). After a distinguished career largely centred on the French Revolution, he began in later life to publish a number of memoirs. Introducing A Classical Education (1985) he admitted:

This is a very personal account, written from my own memories, such as they are, and often embellished by my own imagination. I have not aimed at absolute accuracy, being more concerned with readability; this is not a historical narrative, and I am not always sure at what stages fictional inventiveness takes over from the chronicle of memory.

Such honesty is disarming – reassuring, too, for anyone who (like me) has spent time during this past year of lockdowns trying to put onto paper memories and impressions of their own life. Truth is, we are all unreliable narrators and might as well admit it at the outset. Let Jane Austen, writing in Emma:, have the last word: ‘Seldom, very seldom, does complete truth belong to any human disclosure; seldom can it happen that something is not a little disguised, or a little mistaken.’

Marina Warner, Inventory of a Life Mislaid: An unreliable memoir, (2021)

Alison Light, ‘A Radical Romance’ (discussion of her memoir A Radical Romance: A memoir of love, grief and consolation (2019) in 9 West Road, University of Cambridge Faculty of English alumni magazine (March 2021) p.16