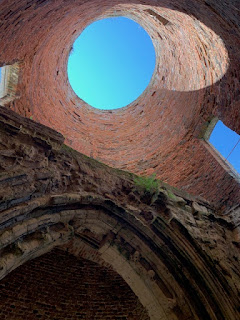 ‘I grow old … I grow old … I shall wear the bottoms of my trousers rolled’: thus TS Eliot’s Prufrock, and I know how he felt. These days, seaside holidays provoke in me two contrasting emotions: nostalgic indulgence in old memories (mostly of Sidmouth in early youth) tempered by the graceful acceptance that as a grandparent my role now is to sit quietly on the beach unless required (a) to assist with making sandcastles, (b) to admire the sandcastles made without any help from you, grandpa, (c) to act as lifeguard when paddling occurs, (d) to be on hand to buy ice-creams, fish & chips or crab sandwiches when time and circumstance  demand.

Philip Larkin sums all this up perfectly with his account of ‘the miniature gaiety of seasides’, in ‘To the Sea’1. I believe this was the second Larkin poem, after ‘Church-Going’, I ever read and I’m still struck by the evident pleasure he took in returning to one of the few scenes of his childhood remembered with evident affection. 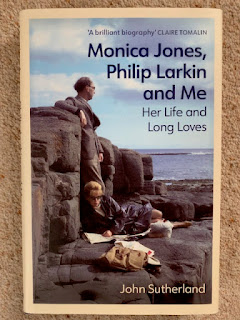 It’s entirely appropriate that John Sutherland’s recent biographical memoir, Monica Jones, Philip Larkin and Me: Her Life and Long Loves (2021) should have on its front cover a photo of Larkin and Monica enjoying (or not?) a morning on the rocks, probably at Sark in the Channel Islands, where they used to go for what was ‘half an annual pleasure, half a rite’. He stands staring out to sea, wearing a Harris tweed sports jacket and grey flannels. Monica, looking like Catherine Deneuve on a bad day, sprawls on the ground with her back to him, reading the Daily Telegraph through dark glasses. I wonder who was with them to take the photograph?

We have just spent a week in Norfolk.2 We weren’t exactly beside the seaside, for we stayed in a holiday cottage on the Norfolk Broads, a few miles inland. It was a remote spot deep in Britain’s smallest National Park: a straggle of old cottages, some newer bungalows and clusters of thatched or pantiled farm buildings, barns in particular. The local thatcher had been kept busy: I’ve never seen more skilful thatching, and signs of his recent handiwork were everywhere.

A quarter of a mile beyond our cottage a signpost pointed to How Hill, apparently the highest point on the Broads. Our evening walk took us this way towards How Hill Nature Reserve, a good viewpoint for spotting windmills. I have never seen more windmills in one landscape – not even in the Fens, where I grew up. Nor have I ever seen anything odder than the early 18th century windmill tower at St. Benet’s Abbey, built into the ruins of the 15th century Abbey gatehouse. I can only describe this as an architectural palimpsest. At first, I thought it a demonstration of lingering protestant contempt for pre-Reformation Catholic Britain, but an interpretation panel nearby reassured me that the site was chosen so that the windmill could rest on the firm foundations of the Gothic gatehouse.

We had approached St Benet’s by a boat hired at Potter Heigham. It must have been the slowest boat on the Broads, since everyone else overtook us. But speed isn’t the point when one is simply messing about on the river. I’d hoped to catch sight of a wherry or barge being quanted (a quant is a larger, heavier form of punt pole – a barge pole in fact) but I fear the practice must have died out. What I did see, however, was a small child assisting her father as he sat fishing from the riverbank; at his command, she would fire from an angler’s catapult a salvo of oddly-coloured maggots aimed approximately towards the water. These pink creatures, caught by the sunlight while in full flight, exactly matched the colour of the child’s baseball cap; nothing, however, could match the glint of sheer fun in her eyes. Why did I suddenly think of Minnie the Minx?

But going to the beach was what our week in Norfolk was all about. Cromer was crowded, though at least we saw the celebrated Cromer goats – well-horned black and white Bagots – munching away at the grass and gorse on the cliffs. According to North Norfolk District Council, these goats ‘carry out an important habitat management role’ – an unexpected way of describing what comes naturally to goats.

Gorleston Beach was wonderfully sandy, and stretched for miles, so far in fact that when I had eventually found an ice cream kiosk and returned, clutching a handful of rapidly disappearing ice creams, my clothes were streaked with dismal evidence of melted mint choc chip. The midday sun was indeed so strong that I had also purchased a navy baseball cap that I would have called discreet but for the words NORFOLK BROADS emblazoned on the peak.

Sheringham, a place for which I have great affection, offers everything a serious seaside family can ask for. And more. Where else in the world can you visit public loos where all the windows are filled with high-quality Edwardian stained glass: galleons and sailing smacks in the upper lights, fish and seaweed in semi abstract style below? Uplifting seems an odd word to apply to Council-controlled conveniences, yet it fits these perfectly, the windows carrying out an important facilities enhancement role.  Vaughan Williams used to stay nearby and wrote his great Sea Symphony at Sheringham. I hope he’d have agreed with my choice of epithet: he was a master of uplift.

But the tide is on the turn and it’s time to leave the beach. By tomorrow we’ll have packed up and set off for home, heading westwards after a week we shall all remember, wondering (but only to ourselves) whether, when and where we shall have such a seaside holiday again. Let Larkin have the last word:

It may be that through habit these do best

Coming to the water clumsily undressed

Yearly; teaching their children by a sort

Of clowning. Helping the old, too, as they ought.