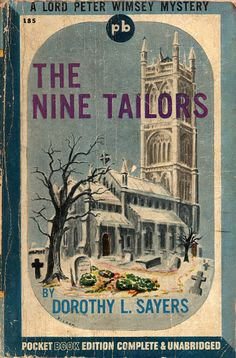 In Cornwall, at the beginning of last week, I discovered a telegram sent to the stained glass designer, Charles Eamer Kempe, on the occasion of Queen Victoria’s Golden Jubilee; five days later I discovered that the poet Ezra Pound had been a fan of Dorothy L Sayers’ detective novel, The Nine Tailors. These discoveries are not unconnected.

That Pound had enjoyed this story of bells and bell-ringing in the Fens astonishes me: he famously hated the noise of church bells. Yet no other novel describes the art and sounds of change-ringing more knowledgeably and affectionately than The Nine Tailors.

When he lived in London, Pound had lodgings close to St Mary Abbot’s, Kensington. The bells tormented him, and he held the Vicar, Prebendary Somerset Edward Pennefather, to blame. Thus when the Vorticist magazine BLAST  (promoted by both Pound and Percy Wyndham Lewis) appeared in 1914, among the list of those to be blasted ‘Rev Pennyfeather (bells)’ duly appeared – much to the bewilderment of the few readers who bought this short-lived but now-seminal modernist tract. Poor misspelt Pennefather was in good company: the Bishop of London ‘(and all his posterity)’, Edward Elgar, John Galsworthy, cricketer C.B. Fry and Beecham (Pills, Opera, Thomas) were among those similarly damned.

Pound’s annoyance at the bells did not fade with age. In 1911, he had endured a three-and-a-half-hour peal rung to celebrate the coronation of George V; even after that king’s death twenty-five years later he was still outraged:  ‘It appeared to me impossible that any clean form of teaching cd. lead a man, or group,  to cause that damnable and hideous noise and inflict it on helpless humanity’  he wrote in Guide to Kulchur (1938). So how Pound had meanwhile read and enjoyed The Nine Tailors (1934) is a puzzle worthy of its detective, Lord Peter Wimsey.

Perhaps the answer lies in the book itself. Sayers acknowledges that
‘The art of change ringing is peculiar to the English, and, like most English peculiarities, unintelligible to the rest of the world.’ More than this, she admits that ‘To the ordinary man, in fact, the pealing of bells is a monotonous jangle and a nuisance, tolerable only when mitigated by remote distance and sentimental association.’  For Pound in Kensington, neither had the distance been remote, nor the coronation associations sentimental: he was after all American.

Thus far, then, Ezra Pound might have agreed with what Sayers had to say about bell-ringing.  He might, too, have relished the irony that in The Nine Tailors it turns out to have been the bells themselves that caused the victim’s death. As Lord Peter puts it, ‘The murderers of Geoffrey Deacon are hanging already, and a good deal higher than Haman’.  But I think Pound would have relished above all the way Dorothy Sayers names the bells and lets them speak:

I know no better description anywhere of the sheer exhilaration of joyous sound; and no description more technically precise or more evocative of the whole tradition of English change ringing. But that’s not all.  In this same passage, Sayers is at work laying the foundations for the story to follow: the idea of ‘hunting up, hunting down’ prefigures the long and tortuous search for the murderer and the missing emeralds lying at the heart of this classic novel, while the sinister phrase ‘dodging, snapping, laying her blows behind’ anticipates (though one won’t realize this until the last chapter) the violence of the death Lord Peter is asked to investigate. 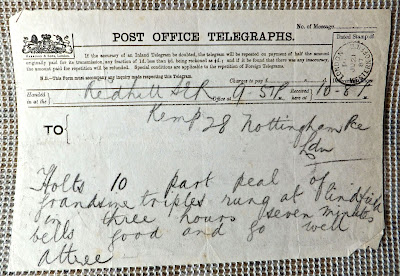 All of which chimes, aptly, with that telegram which came providentially into my hands last week. Sent at 9.57pm on Tuesday 21st June 1887 to Charles Eamer Kempe in London, it reads:

21st June 1887 marked Queen Victoria’s Golden Jubilee. Kempe, by this time becoming one of the best-known stained glass designers in the world, lived in Sussex and was churchwarden of Lindfield Parish Church. Like Prebendary Pennefather, he believed peals of bells were the right way to celebrate royal events, and had gone so far as to give three new bells to the church to enable a full 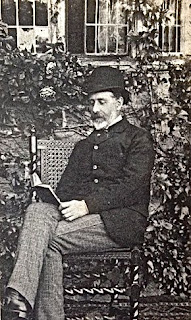 peal to be rung for the Jubilee. Hence this telegram, sent to him in London where he was at work in his Nottingham Place Studio.  He’d have been pleased to know the bells sounded well, for they meant a lot to him: each one bore (bears still) both the inscription

and, alongside the text, his distinctive mark, the wheatsheaf. Wheatsheaves are found in his stained glass the world over, but never on objects, furnishings etc, designed or commissioned by him. Except on these three bells. They are an important, unique and uniquely personal part of the Kempe heritage – his own signature on his own gift to his own church, to be cherished at all costs.  I’d like to think that even Ezra Pound, who after reading and enjoying The Nine Tailors was moved to write a fan letter to its author, would have appreciated how much that telegram I held in my hands in Liskeard last week must have meant to Kempe.

[Notes: (i) I found the reference to Ezra Pound and The Nine Tailors in a review by Mark Lawson of The Golden Age of Murder by Martin Edwards, in the Guardian Review (30.5.15)
(ii) For further information about the Kempe Bells and the plans of the present Vicar of All Saints Lindfield to melt them down, read ‘New Bells to Celebrate HM the Queen’, published in Lindfield Life.  You can also read my piece on Kempe’s Bells for the Kempe Trust Blog.
(iii) I am grateful to Ian Marr of Ian Marr Rare Books, Liskeard, for my first sight of the telegram sent to Kempe.